I haven't been writing a whole lot of personal stuff for awhile.  And that's because I've been carrying around a secret for the past two years.

It's funny how an idea gets going in the zeitgeist.  I was terrified of it getting out there before I could finish my manuscript.  As it is, other people have put together a movie coming this fall, a show potentially hitting Broadway, another one running in LA...  If valiant poppy is the new black this fall, Robin Hood is the new literary trend.  But my book is finally finished.  And it is coming your way. And so now I can talk about it.

And here is my secret. 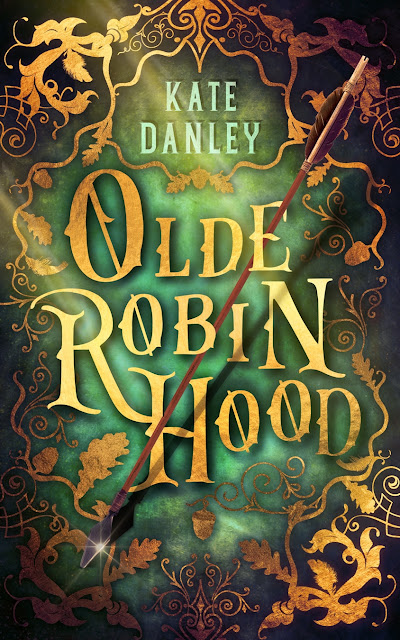 While my online persona has been the picture of a calm and quiet life, I have actually been to Sherwood Forest.  I have crawled through the prison owned by the Sheriff of Nottingham.  I have walked through the sandstone caves beneath the city, all in the name of research.

But I'm getting ahead of myself.

It started in the summer of 2016.  I get this call from a fancy publishing lady, sort of the fanciest of the fancy, who had stumbled across my books and was wondering if I had any manuscripts looking for a home.

In case you were wondering, this is THE WORST.

I wander into The Strand bookstore and go wandering through their eighteen miles of books, and end up in the rare and out-of-print room.  There are books in here that cost more than rent in Manhattan.  Which is saying something.

But as I attempt not to drip my drool on their leather embossed beauties, over on one of their shelves I suddenly find this unwanted book just sitting there. 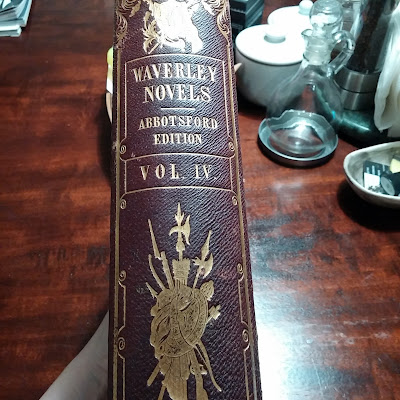 This is an early edition of Sir Walter Scott's Ivanhoe (he wrote under a pseudonym.)

Probably printed sometime in the late 1800s.  And in case you've never read Ivanhoe, it is the story of Robin Hood.  What I was to learn much later is that Sir Walter Scott started writing Ivanhoe, had no idea where he was going with his plot, dropped by Nottingham, and was like, "Holy crap!  This Robin Hood dude is awesome!  I'm going to write the second half of my book about him."  And he did.

So, long story short, yeah.  I bought it.

Now, I'm living up near The Cloisters, this medieval castle on the tip of Manhattan. 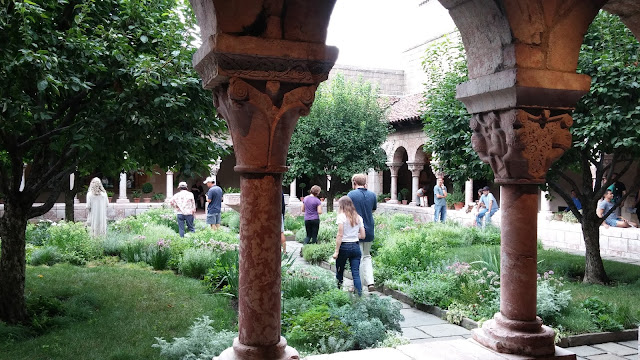 It's my favorite place to grab a cup of coffee and write. 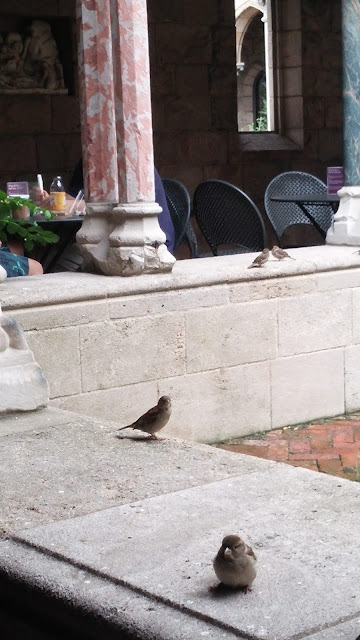 This little bird and I became very good friends.

The Cloisters is home to some of my favorite art, including this one titled:  "What Did They Do to Your Neck, Mom?  When Medieval Plastic Surgery Goes Horribly Wrong" 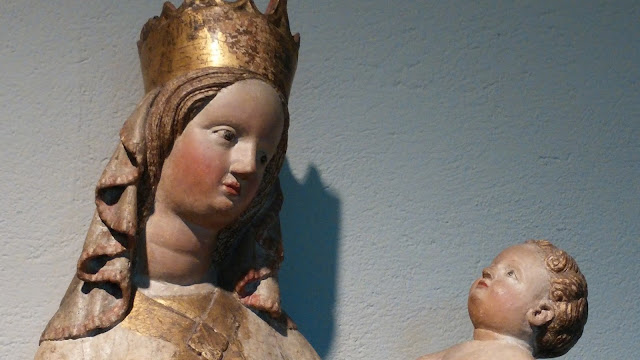 And, "I Love Classic Rock." 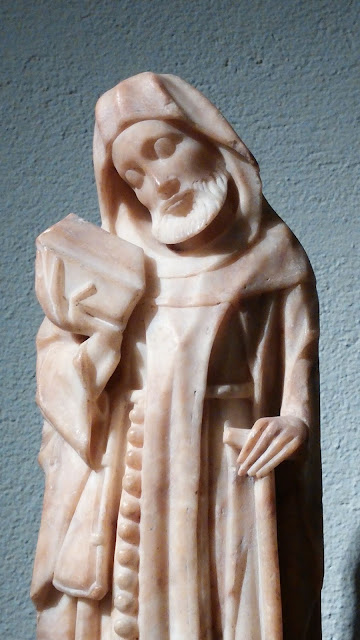 I also had my first encounter with a groundhog.  Which I legit wondered if it was an unusually sized rat or a tailless beaver running around NYC. 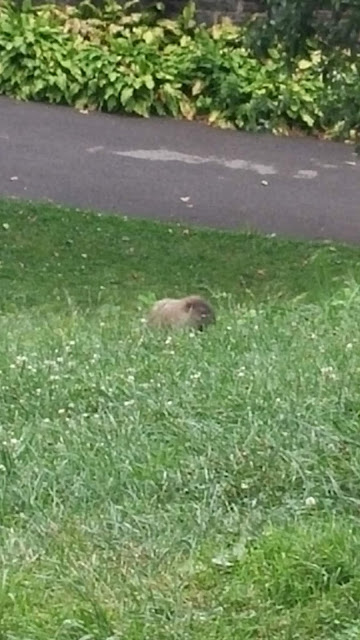 So, I'm sitting there in this medieval castle and go, "By gum!  All signs are pointing to Robin Hood!"  And there's this weird... I don't know what to call it... 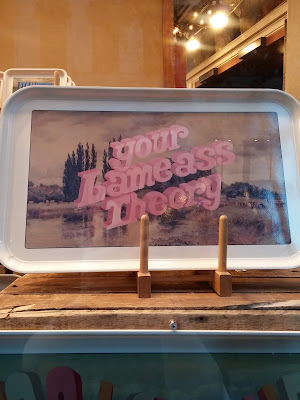 But as a writer, if you start noticing themes appearing over and over again around you, it means that the Muse is putting something out into the ether and either you grab it, or you feel like crap a year later when you discover someone else is doing the project you were "too busy" to get around to.

So, I wander into the gift shop there at The Cloisters and what do you think is sitting there on the bookshelf?  A history of King John. 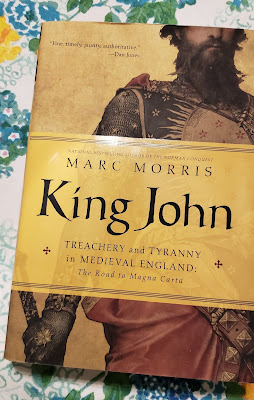 So, I buy this book, all ready to swiftly crank out the stories we all know and love about Robin Hood and King John with my own special flair, because I am Ms. Fancy Flair Pants, and hand over the brilliance I was sure would ensue to the publisher lady in like... a week or something.

But hold the frickin' phone!  I open it up to the intro and discover this passage.

Everything I knew about Robin Hood was a lie!  The cartoons!  The movies!  The television shows!  The EVERYTHING.

My world was rocked.

Folks, the frickin' Hamster Dance song still makes me a little teary because I loved Robin Hood  SO MUCH as a kid.


I realized I was not cool with this betrayal.  Up was down!  Down was up!  Everything I thought I knew was wrong!

And I needed to get to the bottom of this mystery. 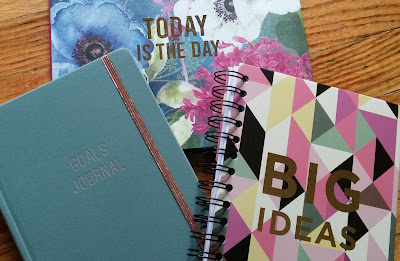 Tune in tomorrow to find out how I decide to tackle this problem in...

Complete list
Complete List
Part I - My Secret
Part II - Cleavage and Turkey Legs
Part III - The "V" Stands for WHAT??
Part IV - Into the Dusty Tomes
Part V - Into The Woods - Sherwood Forest
Part VI - Not in Snottingham
Part VII - Castles in the Sky

Sign up for my newsletter to be among the first to hear when it releases wide!