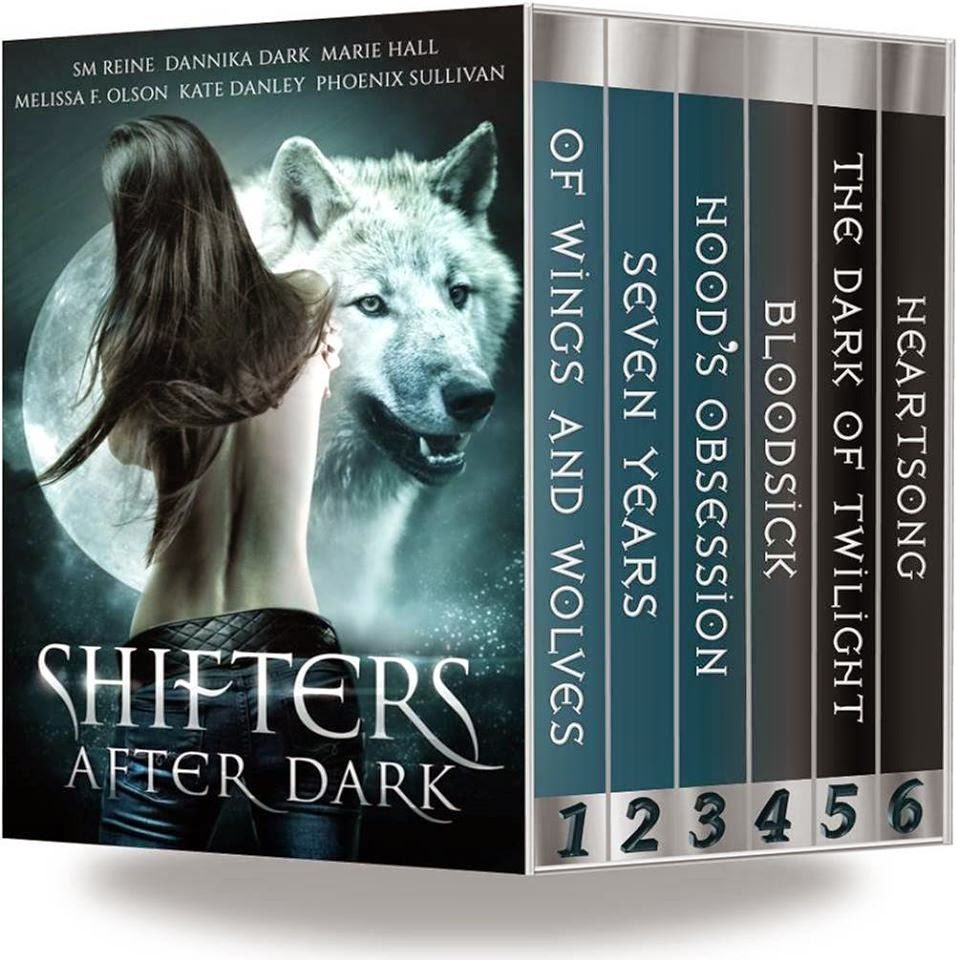 Featuring my BRAND NEW BOOK
The Dark of Twilight

(A $21.94 value)Dive into six incredible fantasy worlds by NYT and USA Today bestselling authors where shifters rule! Whether it's an action-packed urban fantasy or steamy paranormal romance, this collection delivers what you crave most. Six nail-biting stories of adventure, romance, danger, suspense, alpha males, and tough heroines... Dark secrets and imprisoned hearts await. Come unlock them!17+ due to some mature subject matter. Cliffhanger-free!SM Reine - OF WINGS AND WOLVES
Dannika Dark - SEVEN YEARS
Marie Hall - HOOD'S OBSESSION
Melissa F. Olson - BLOODSICK (Exclusive!)
Kate Danley - THE DARK OF TWILIGHT (Exclusive!)
Phoenix Sullivan - HEARTSONG (Box Exclusive!)___________OF WINGS AND WOLVES by SM ReineWhen 20-year-old Summer Gresham, a coed with a secret shapeshifting ability, is singled out for a prestigious internship, she's stunned to discover Nash Adamson emphatically requested her. A rebel angel in exile, Nash has more than a few secrets of his own. With an angel war in the making and Summer at its crux, Nash has to choose what matters most: their love, or his freedom.___________SEVEN YEARS by Dannika DarkLexi Knight hasn't seen Austin Cole since her brother's funeral seven years ago. Now a dangerous bounty hunter, Austin reveals he's also an alpha Shifter. But there's another shocking twist, putting Lexi's family in danger. Can their relationship be salvaged from the ruins of their past? Book One in a bestselling series about family, second chances, and finding that person who completes you.___________HOOD'S OBSESSION by Marie HallLilith Wolf, daughter of the Big Bad Wolf and Little Red Riding Hood, is in heat--and being handfasted to the first male in her village to tame her wolf isn't an option. So when Giles Damien comes calling, she journeys off with him to Fyre Mountain, crossing paths with an angry water dragon, a pub full of Merry Men, and rock dwarves with a taste for flesh ... and maybe falling in love. These are the fairy tales no one ever told you about...___________BLOODSICK by Melissa F. Olson (box set exclusive)Sashi's mother warned her not to get involved with werewolf problems. But Sashi, a witch who uses her magic to help cancer patients, has never made a habit of ignoring pain. When she meets an abused shapeshifter, Sashi will risk everything--including her fledgling relationship--to save a woman who can't save herself. An Old World novella from the author of Dead Spots, Trail of Dead, and Hunter's Trail.___________THE DARK OF TWILIGHT by Kate Danley - (box set exclusive)Ever since she was a child working in his kitchen, Aein always longed to join Lord Arnkell's army. When that day comes and she is sent on patrol with fellow warrior, Lars, it seems her dream has come true. But something has followed her home. When Arnkell's wedding is interrupted by a werewolf attack, the dream shifts into a nightmare... Book One in the brand-new epic fantasy series Twilight Shifters.___________HEARTSONG by Phoenix Sullivan (box set exclusive)By night, as a Gabriel Hound, the fae Brinn runs with The Wild Hunt. When she's unwittingly thralled by princes Alain and Pellinore, she wants only their blood to free her. Until they form a grudging bond that soon turns intimate. Love should be easy, but The Wild Hunt wants Brinn back, the Questing Beast wants Pel, and Alain wants the impossible--to keep them both at his side. An Arthurian-era PNR.