After a spirited day at class, I decided it was time to continue the mood and get into some high spirits... and I don't mean the emotional kind.  My favorite tour group, London Walks, was at it again with a ghost tour of the West End! 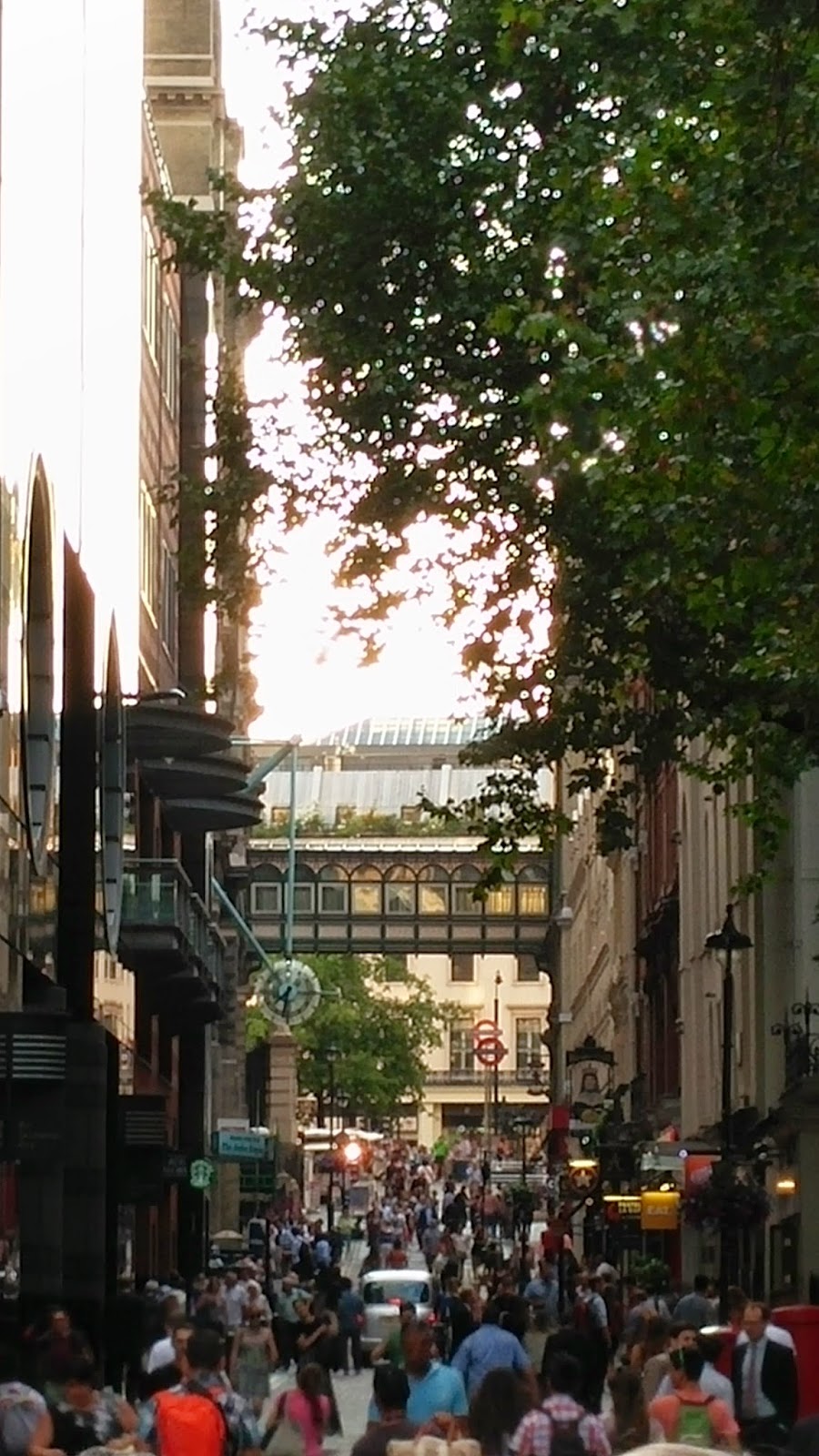 It all started over by the Embankment Tube station, which, color me a tourist, I had never stepped above ground to see.  Look!  Thriving city!  People!  We met up with our tour guide who was an absolute doll.  This guy KNEW. HIS. GHOSTS.  No "wink-wink" nudges.  No "let me give you a historical tour that happens to mention some ghosts".  This was a GHOST. TOUR. and he was ON. IT.  He knew dates.  He knew names.  He had eye witness accounts.  Just the kind of guy you want leading you into the night.

It started with a stroll down the Thames to our first stop. 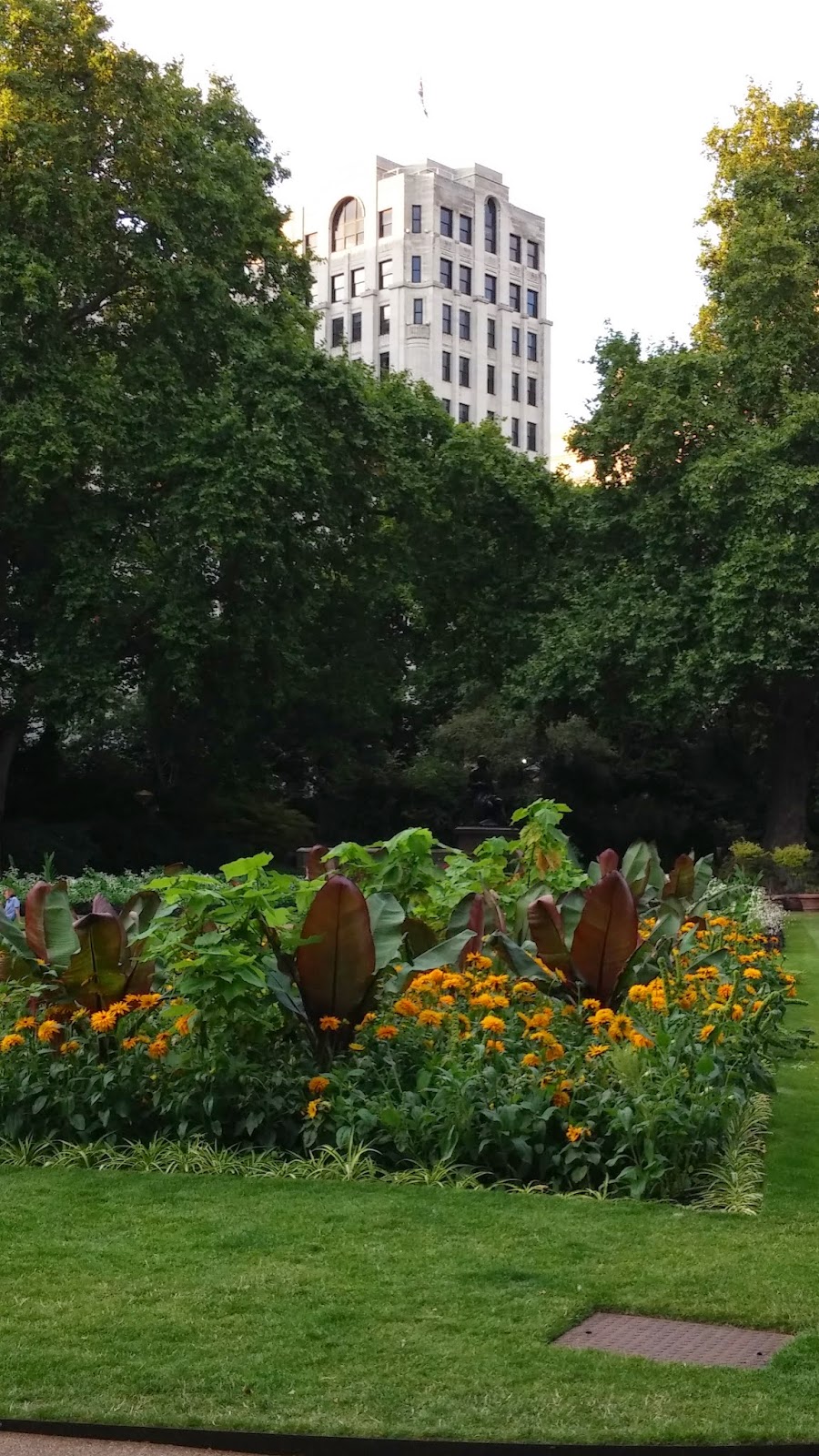 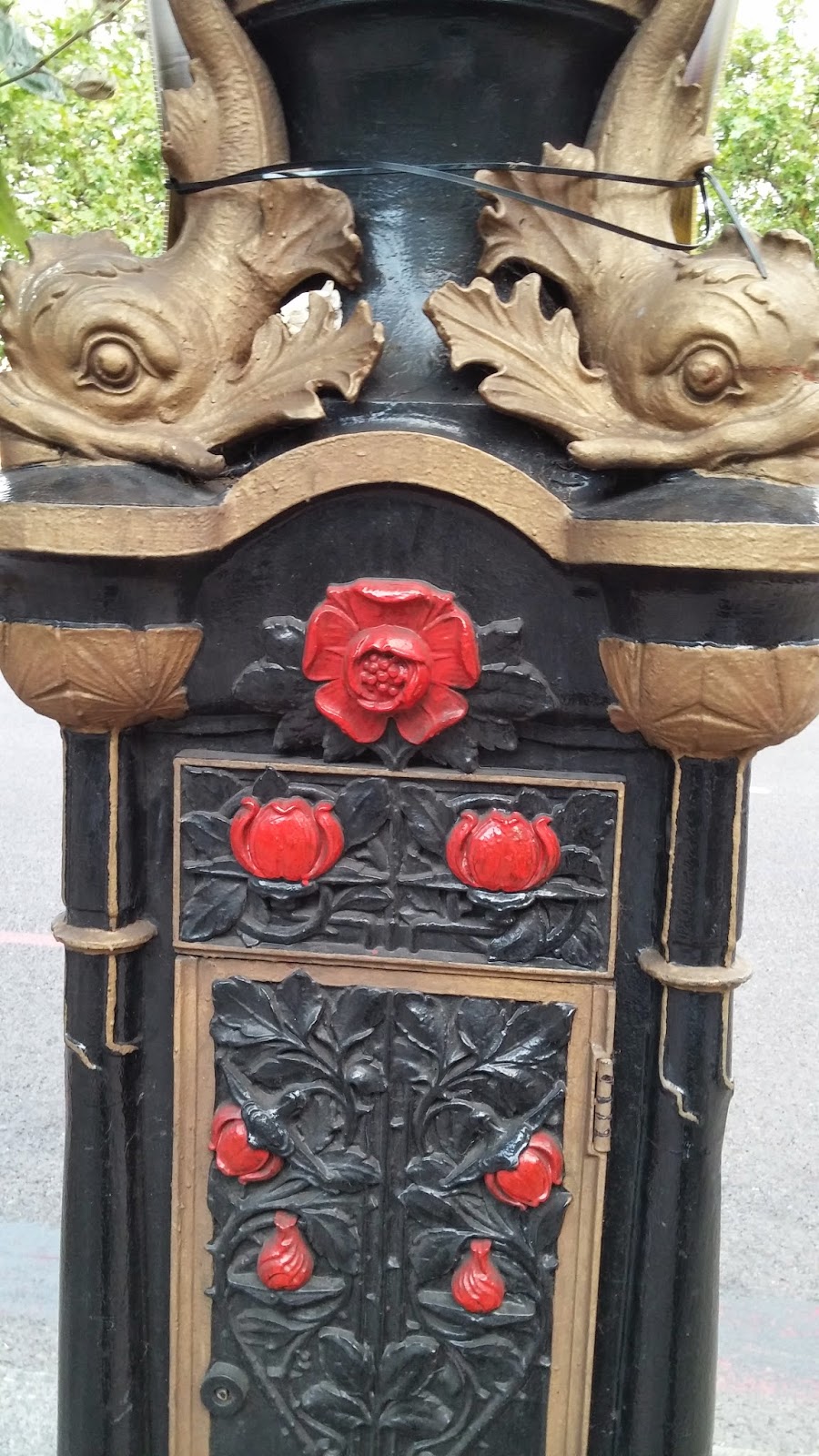 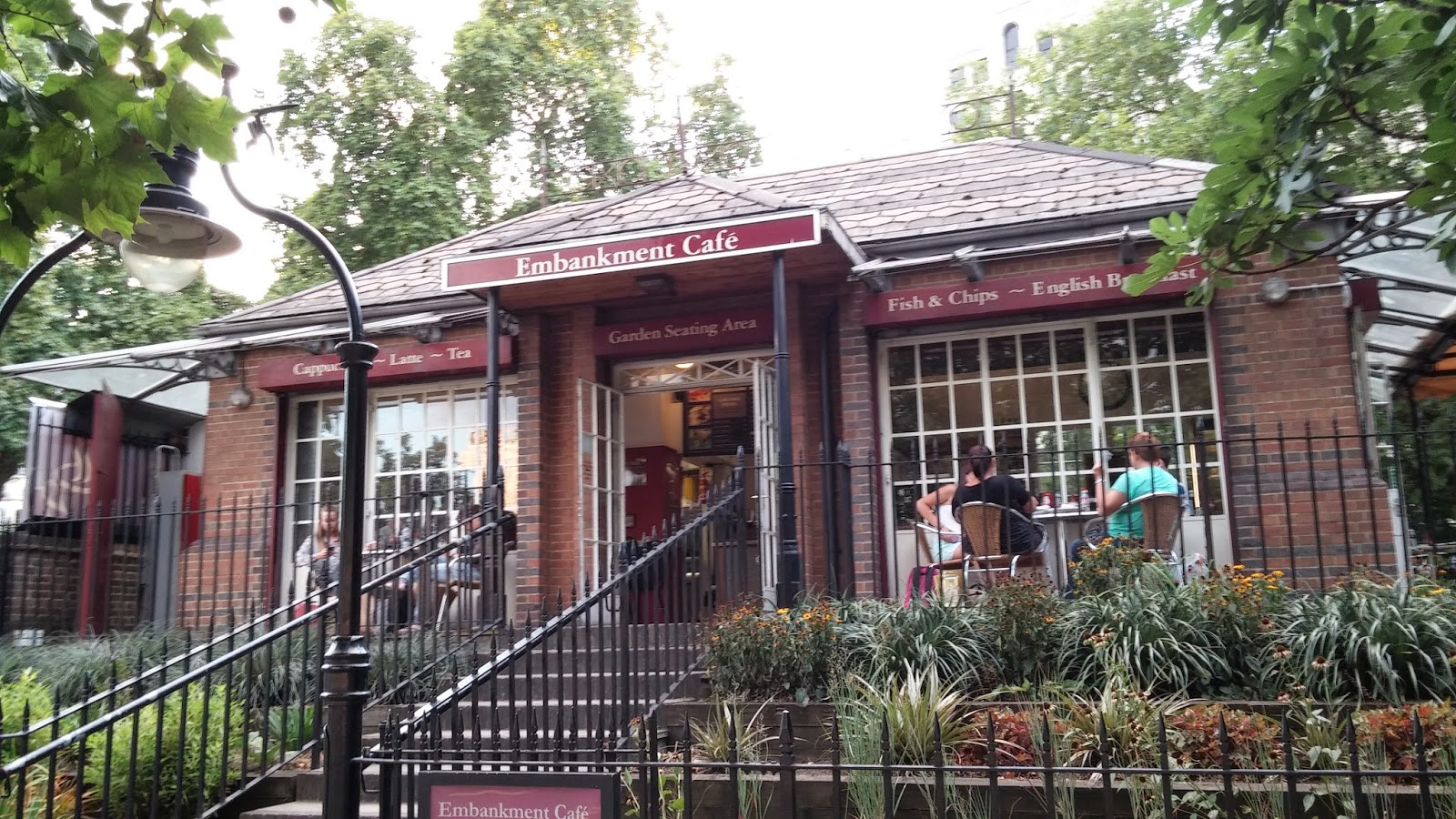 And where was our very first stop?  Cleopatra's Needle! 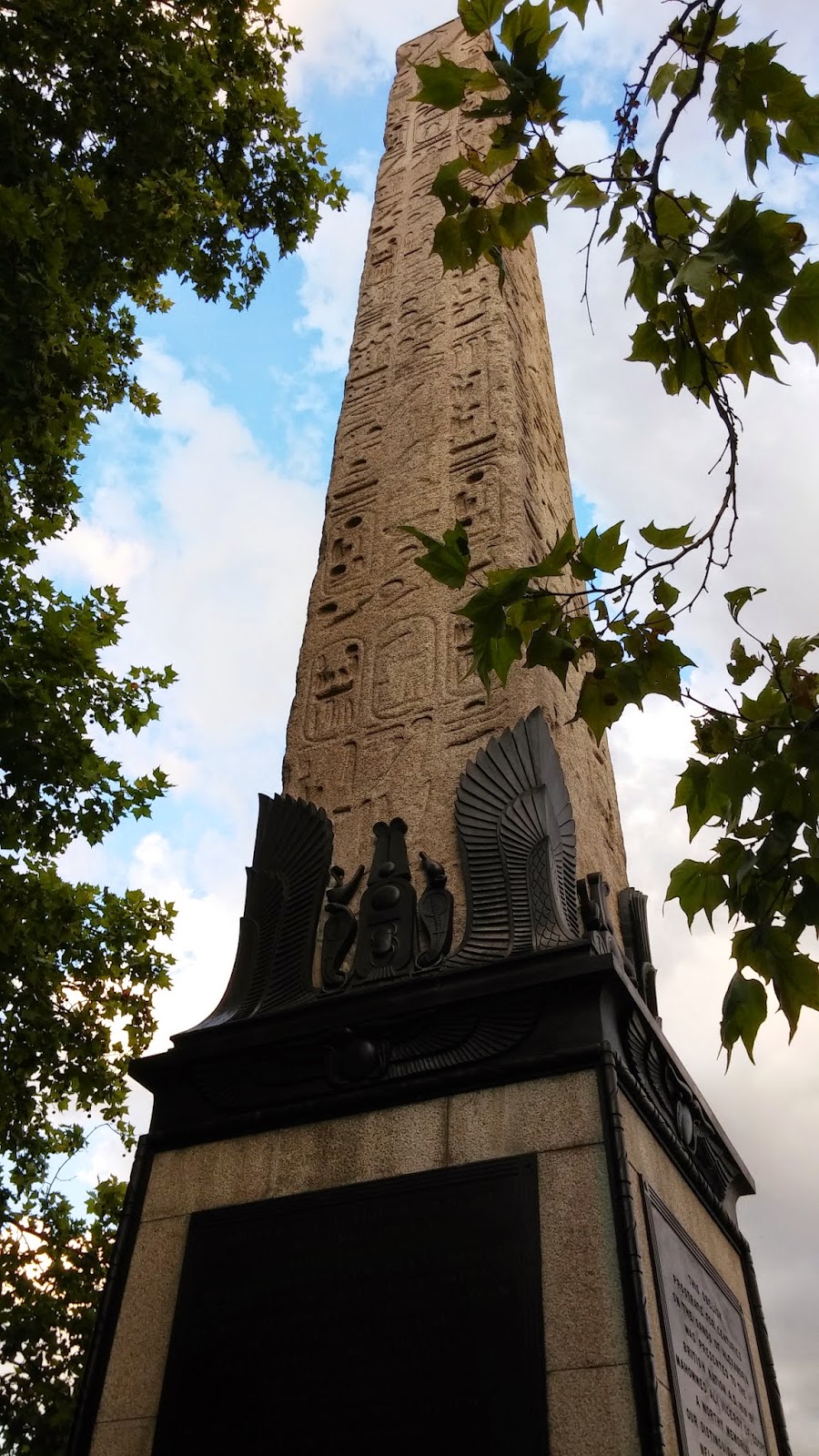 You're probably not as excited as I am.  Listen, when we were learning about acid rain in elementary school, it was all about how Cleopatra's Needle was being destroyed.  We learned all about this thing and how important it was.  And it is still here!  And I saw it!  So melt away all you want now, you historical rock dug up from the Egyptian desert, you!  I have seen you! 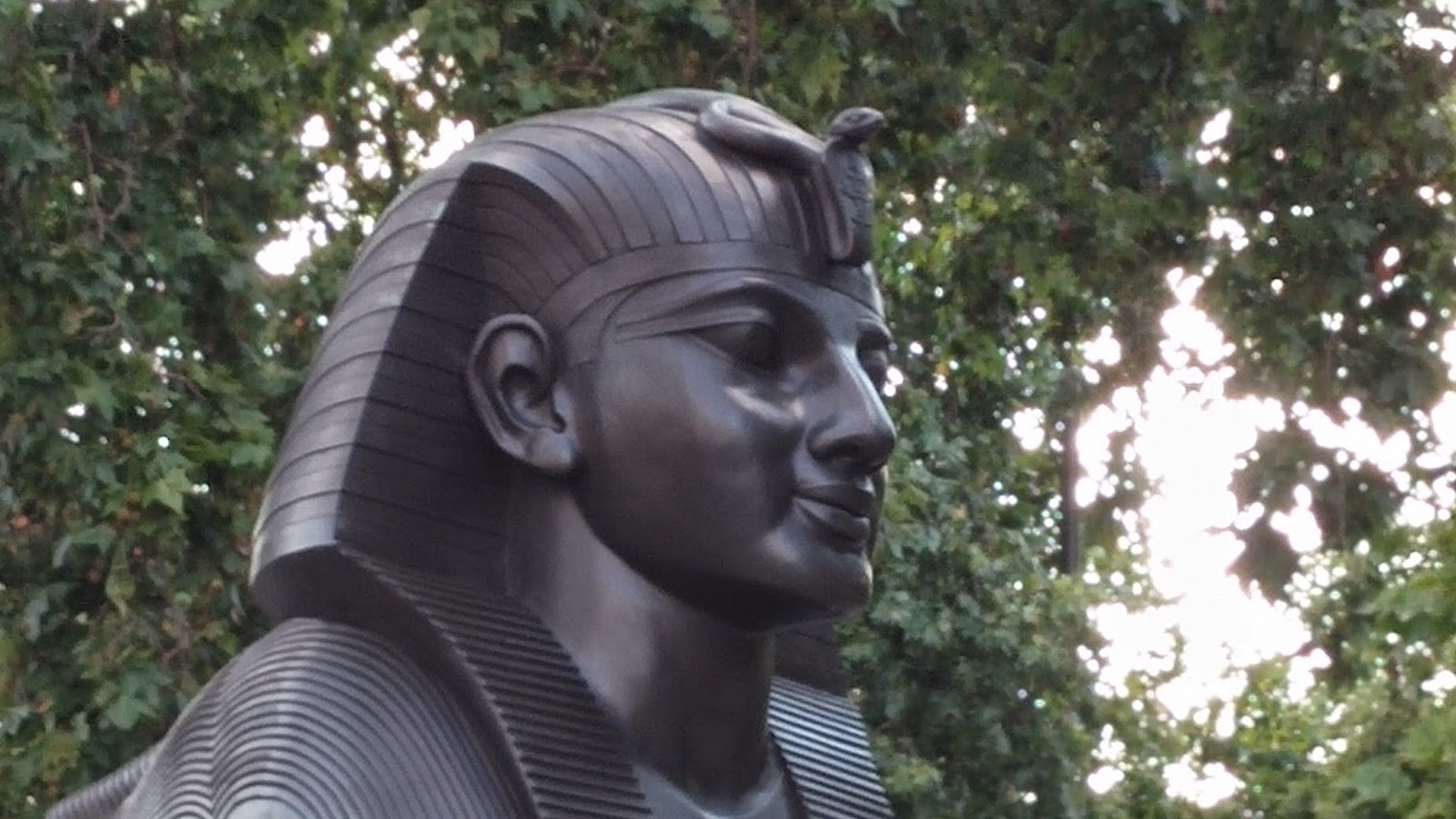 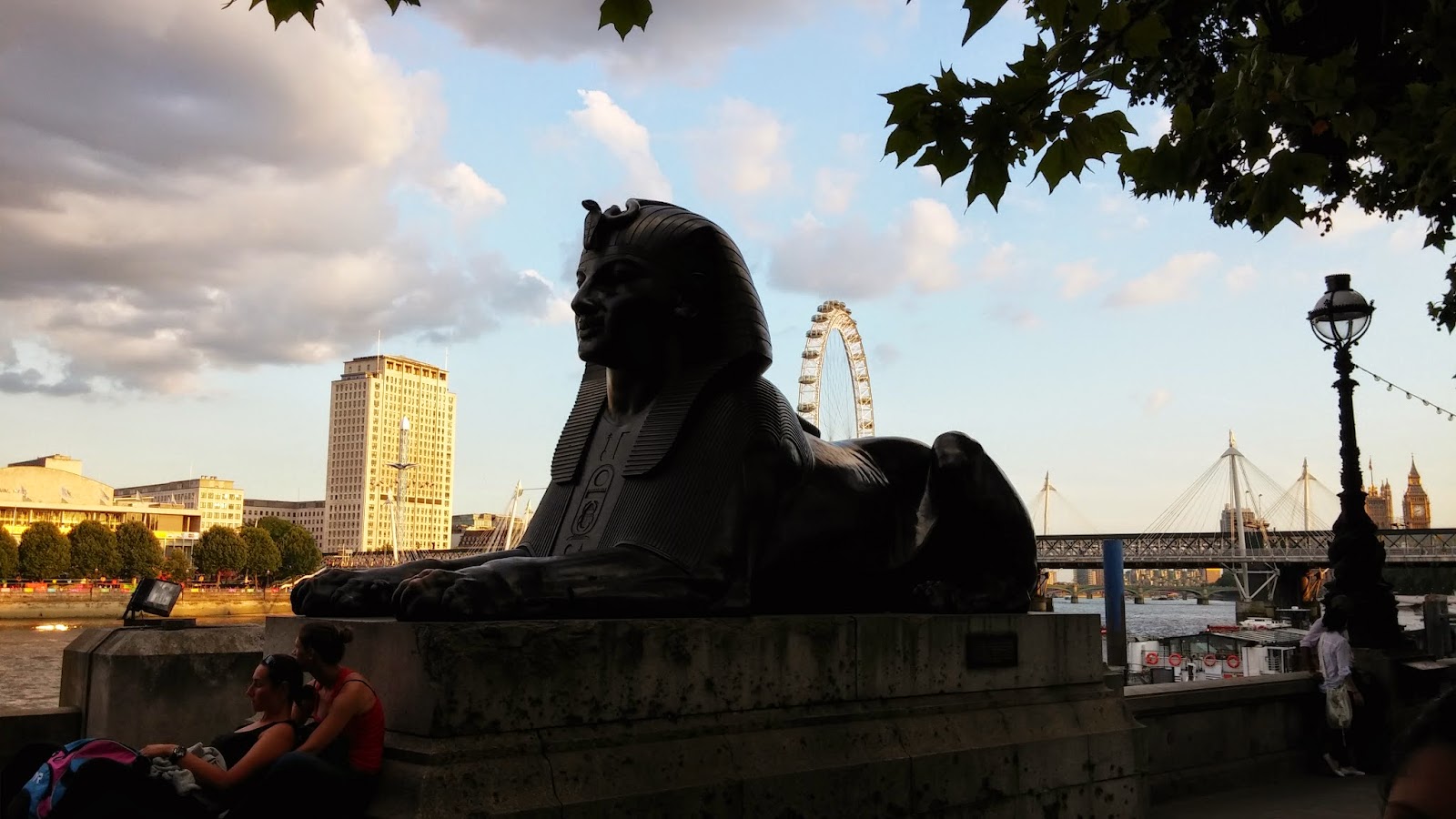 The views were also really nice. 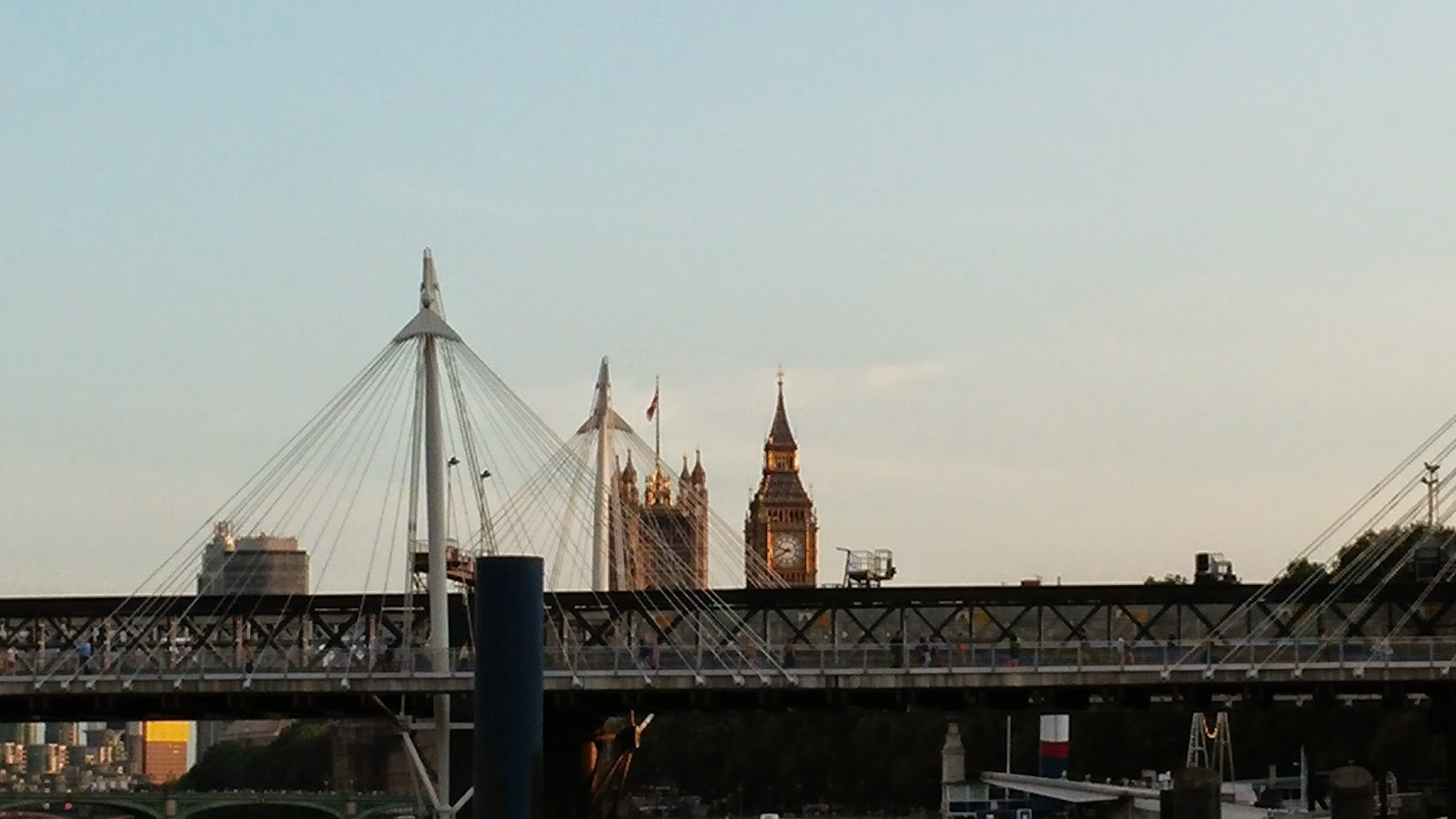 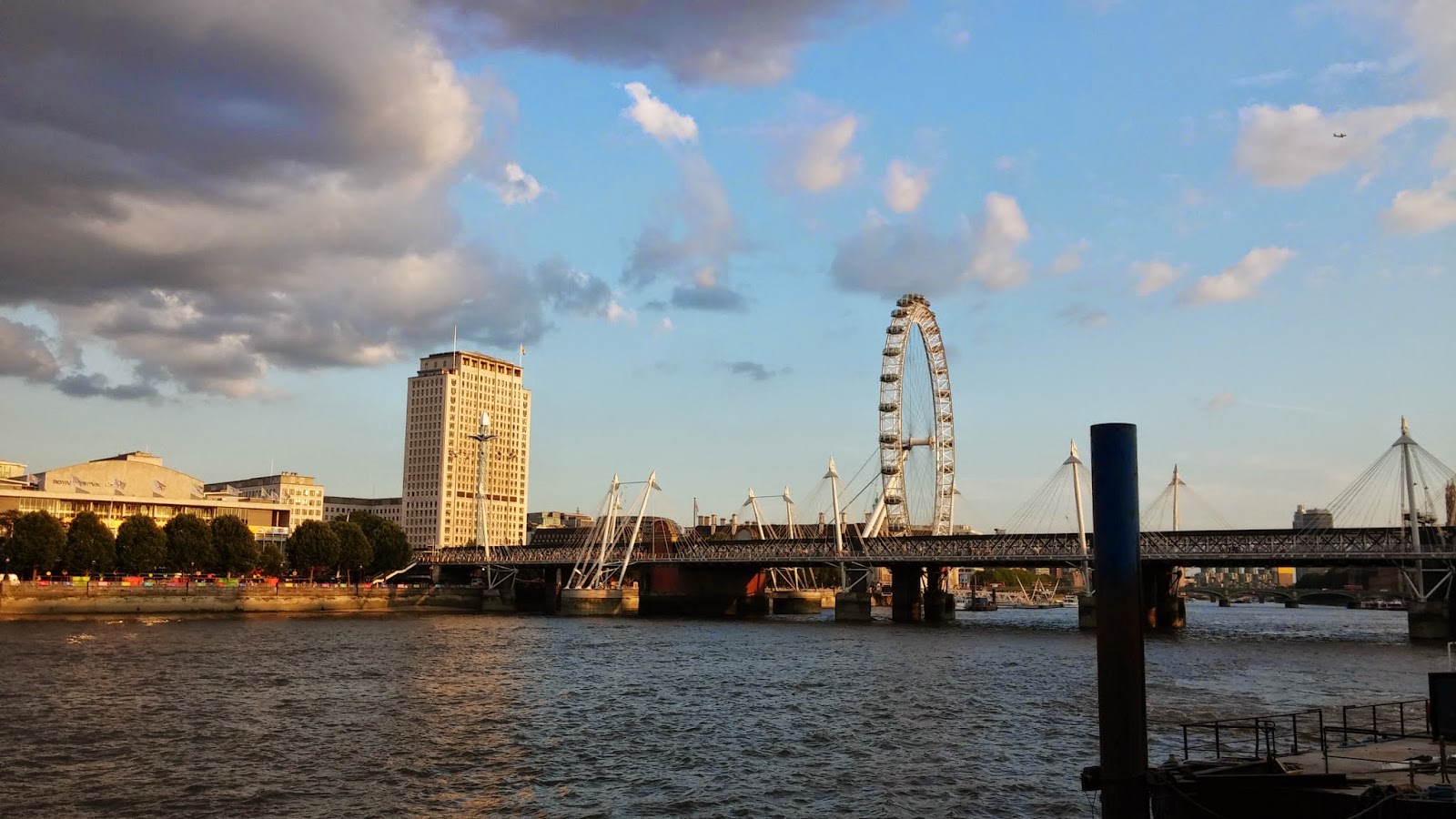 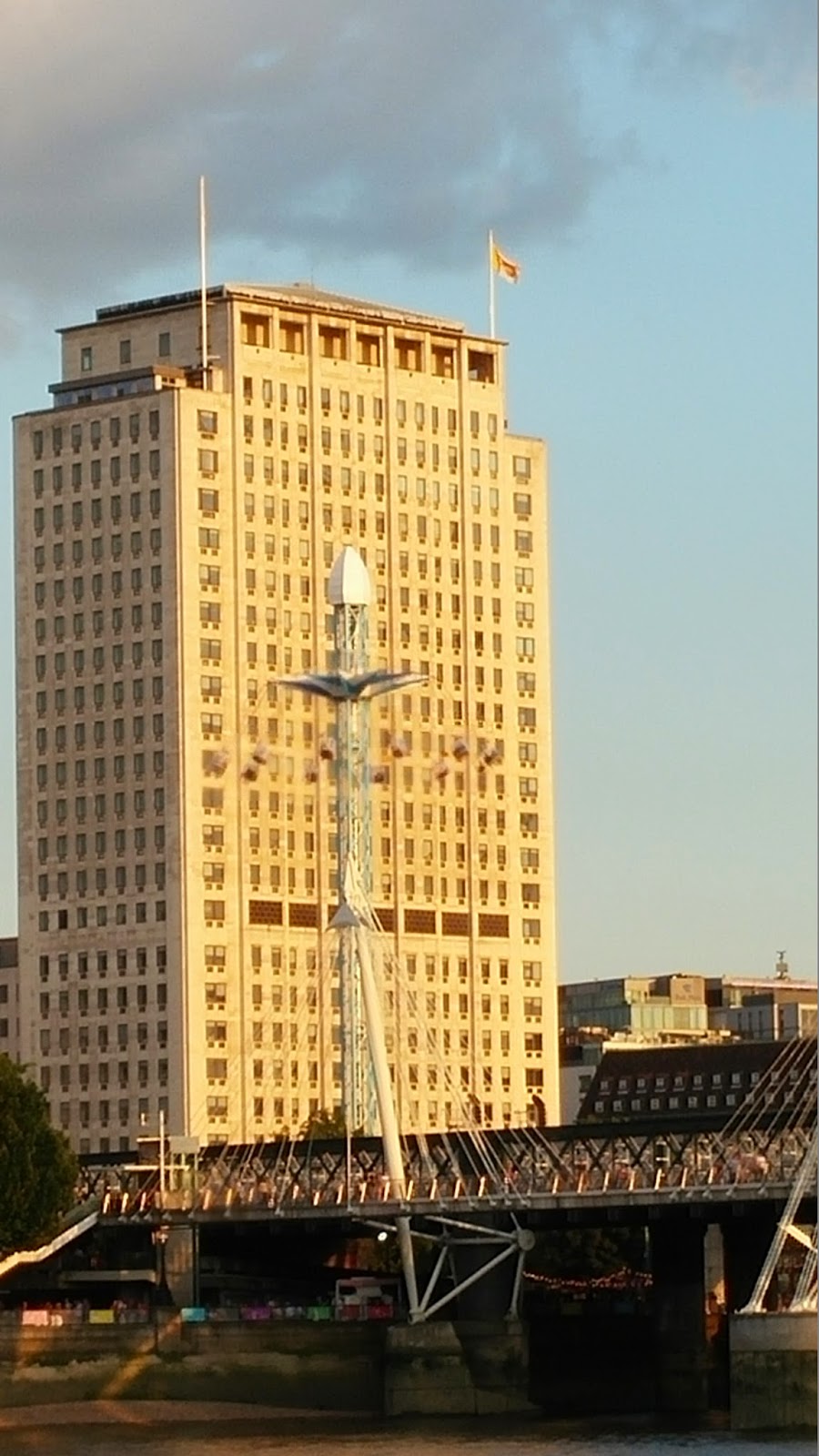 So, we learned that when a person gets a wild hare to throw themselves into the Thames, they tend to do it off of Cleopatra's Needle.  EGYPTIAN CURSE YOU ASK!?  Now you're just talking crazy.  But speaking of crazy, there was a police report from the early 1800s that a bobby was walking the bridge and a woman came running up to him saying someone was about to jump and he needed to go stop her.  Well, he hightailed it over and sure enough, there was a woman standing on the platform.  He grabbed her and saved her, but when he turned her around, SHE HAD THE SAME FACE AS THE WOMAN WHO GAVE HIM THE WARNING!  OoooooOOOOOOooooo!

We then headed up to the Savoy to learn about an old superstition.  Evidently, one night, thirteen people were seated around a table and one of the women became concerned.  She was a superstitious sort and said the first person to get up would die unnaturally.  Well, one of the fellows said that was a lot of rot, got up, and wouldn't you know, a few weeks later he was found shot dead in South Africa.  OOoooooOOO!  So, Savoy, not wanting the bad press, constructed a statue of a black cat.  They named him Caspar, and if you ever have dinner for thirteen, they will always seat Caspar at your table so you have a 14th.  Rumor has it that Winston Churchill really liked that cat and would book dinner there all the time.  The restaurant is called Caspar and that's why the topiaries in front are of cats. 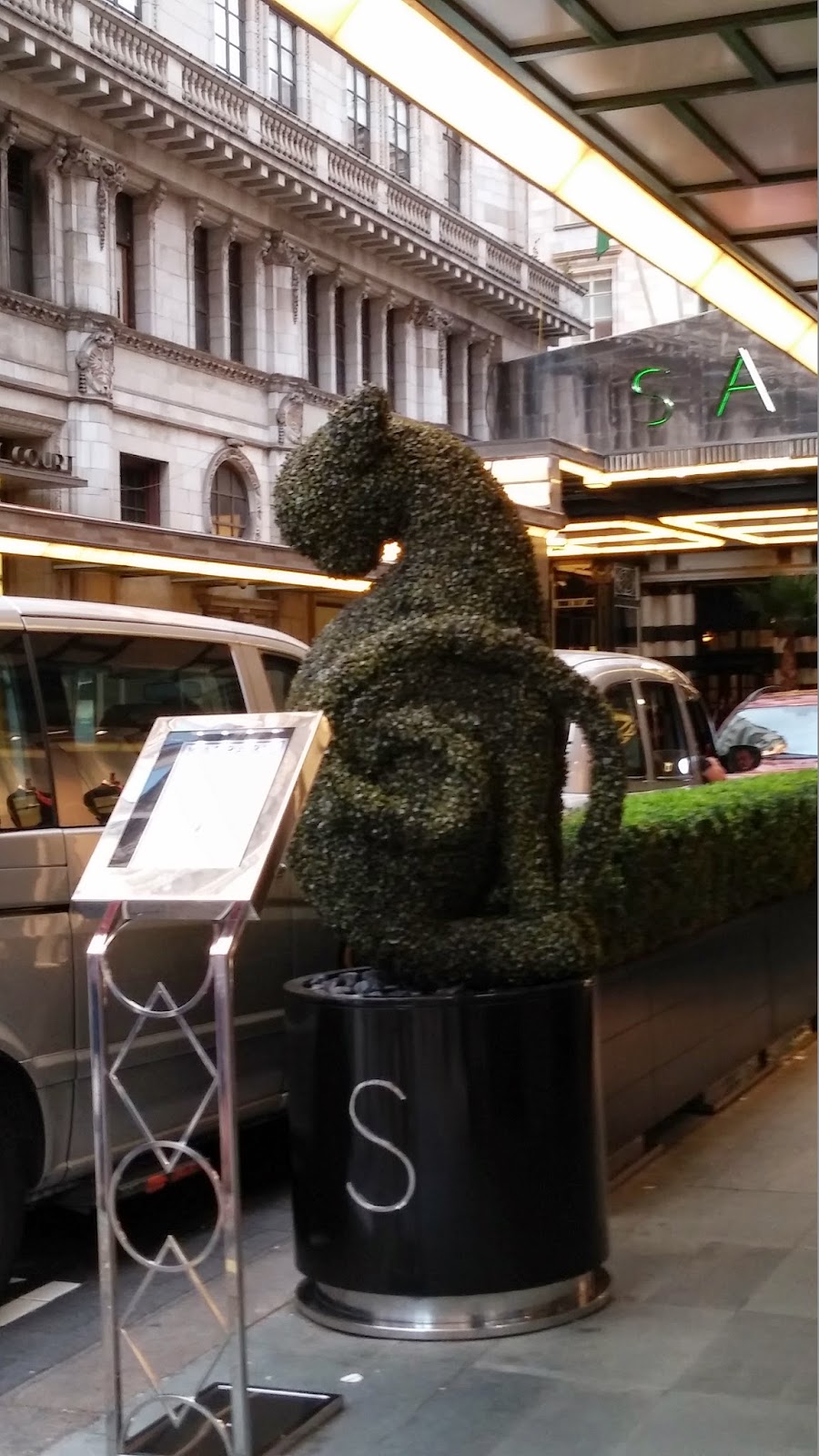 One of the hotel rooms is also supposedly haunted by an opera singer and she'll try singing you to sleep if you aren't careful. 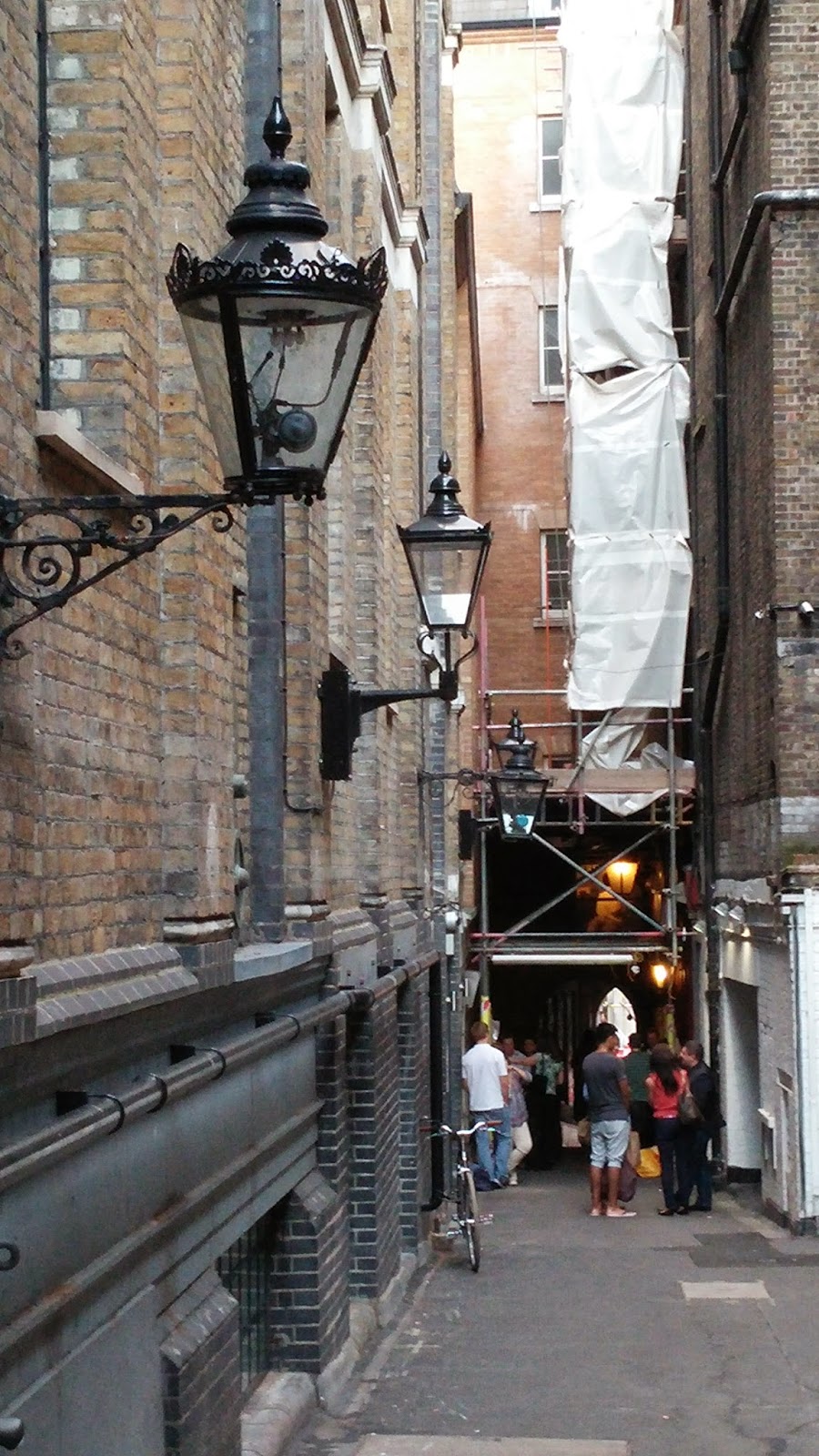 We then headed up this alleyway which flanks one of the oldest theaters on the West End.  There was a theater owner who was stabbed in the back by one of his actors.  Unfortunately, this time it was literal.  He went indoors and died in the arms of his leading lady.  There are old reports of his ghost walking through the bricked up stage door, women using that dressing room have heard him knocking, seats have flipped up one by one in the theater, and other spooky goings on. 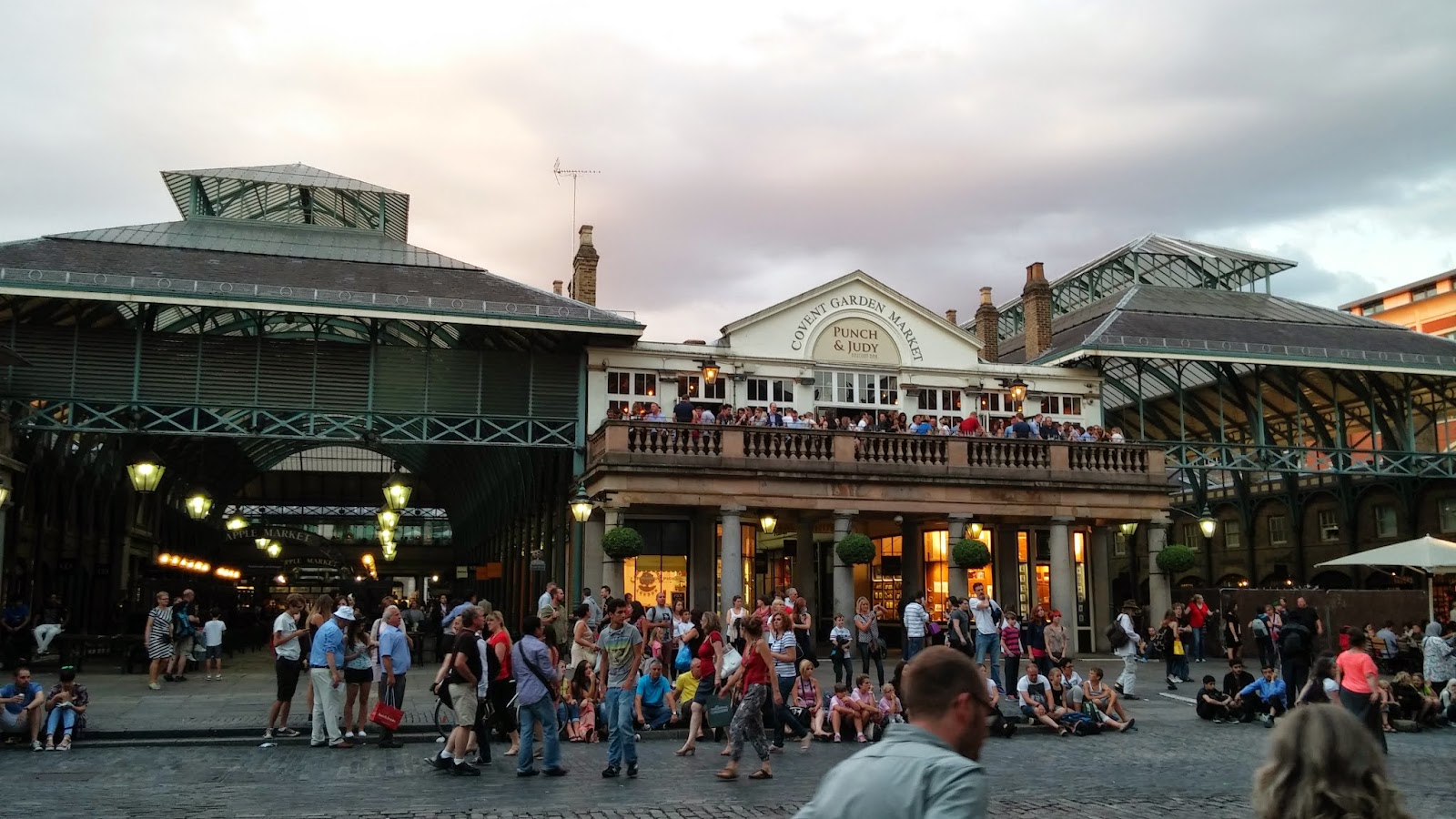 We then headed over to Covent Garden which, believe it or not, originally was a convent garden.  A young Bob Hoskins (yes, of Who Framed Roger Rabbit fame) used to work here in one of the vegetable stalls.  According to his biography, he was down in the basement when the most beautiful woman he had ever laid eyes on appeared.  He was overwhelmed with a  sense of peace and tranquility.  He went upstairs to tell his boss there was some bird hanging out in the storeroom and his boss said, "Oh!  You saw one of the nuns!  They say if you see one, you're marked to have a lucky life."

While not haunted, we snuck down a back alley and discovered THIS adorable alley.  Evidently, it was an inspirational spot for JK Rowlings as she came up with Diagon Alley. 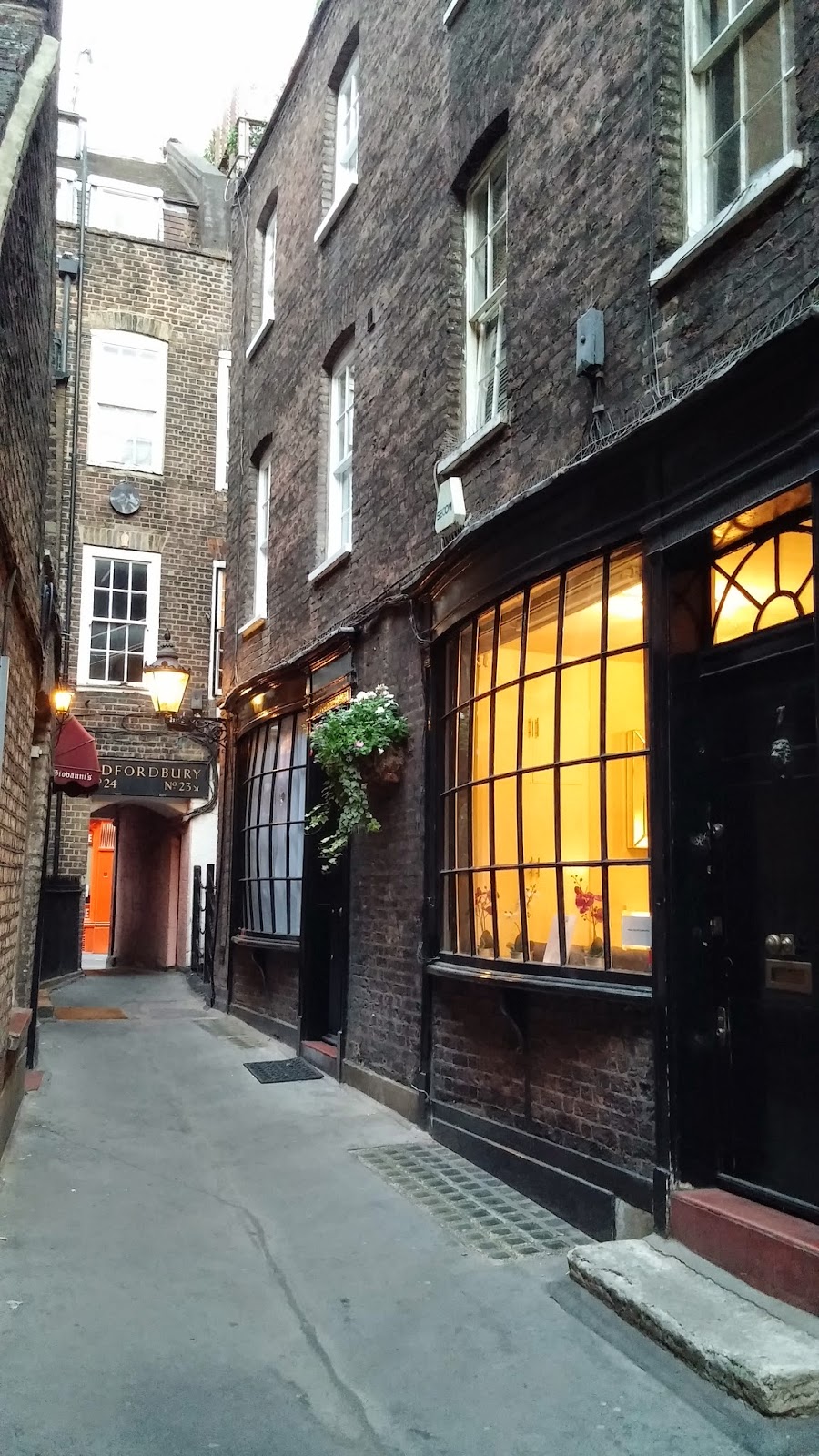 We turned the corner and heard stories about the strangling jacket which choked all the actress who tried to wear it.  We heard about those who perished in WWI who came back for a final goodbye. 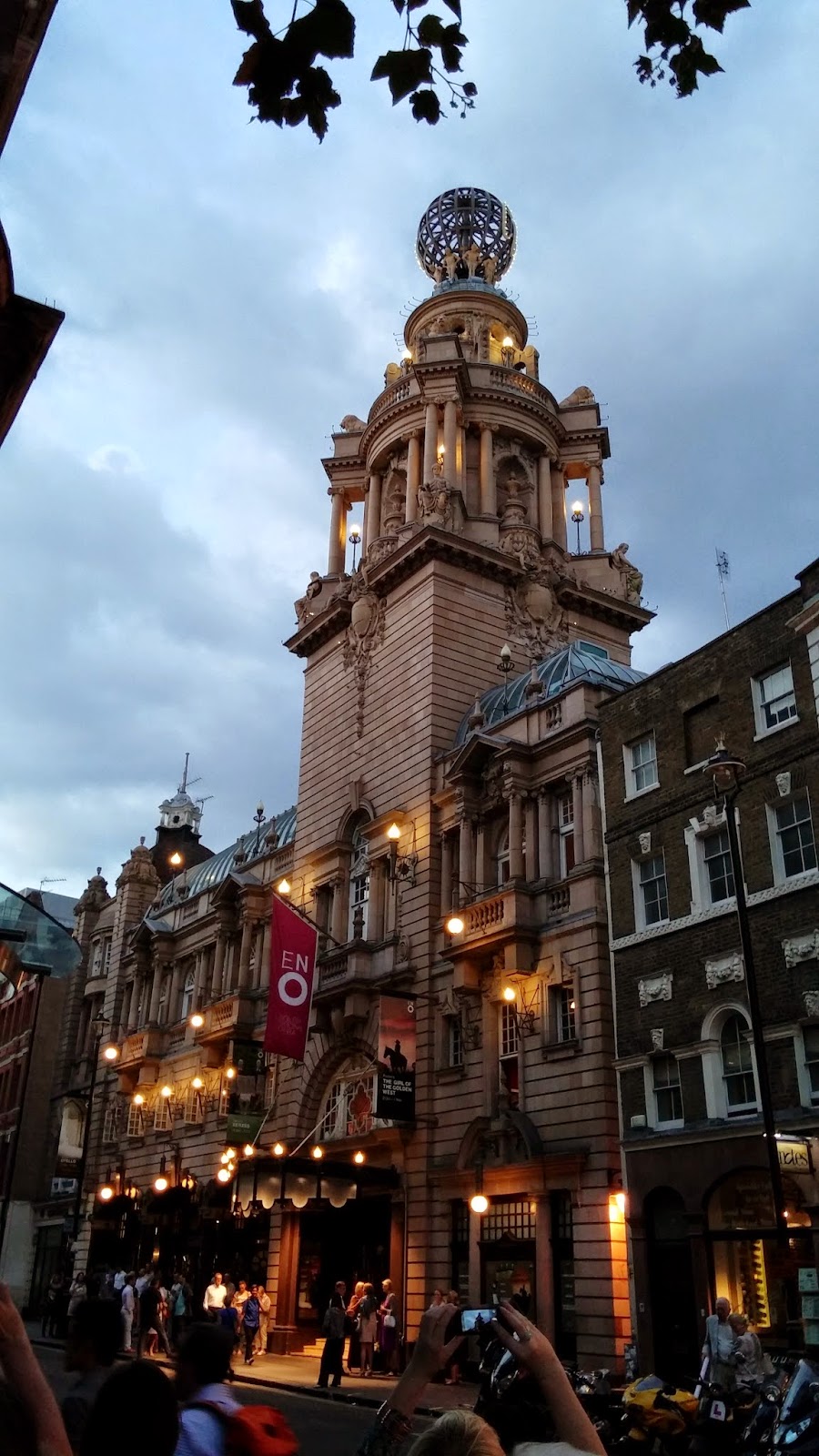 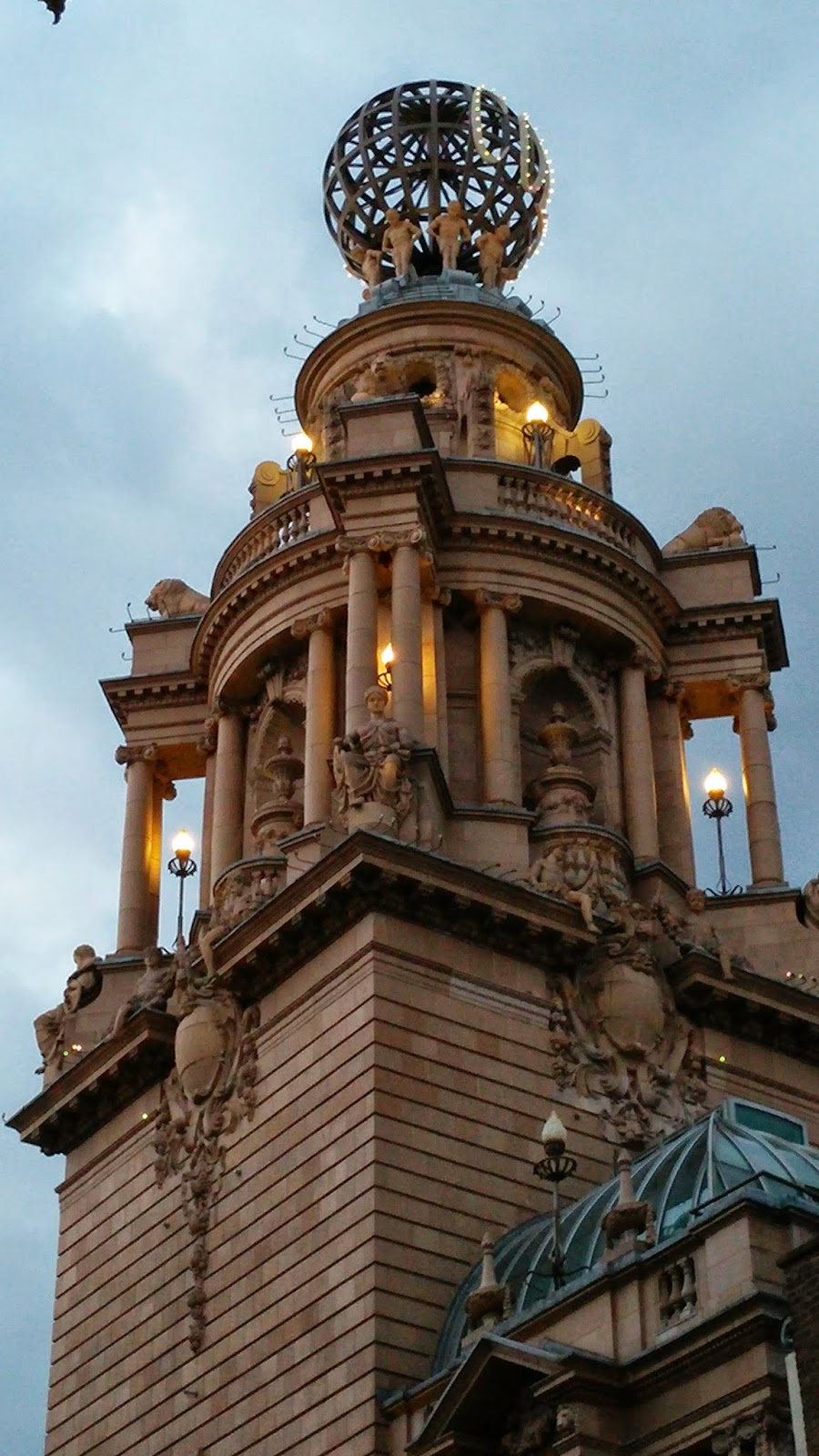 We paused in Trafalgar Square to hear about a headless king who likes to show up from time to time, as well as pause for a moment to enjoy a gorgeous night. 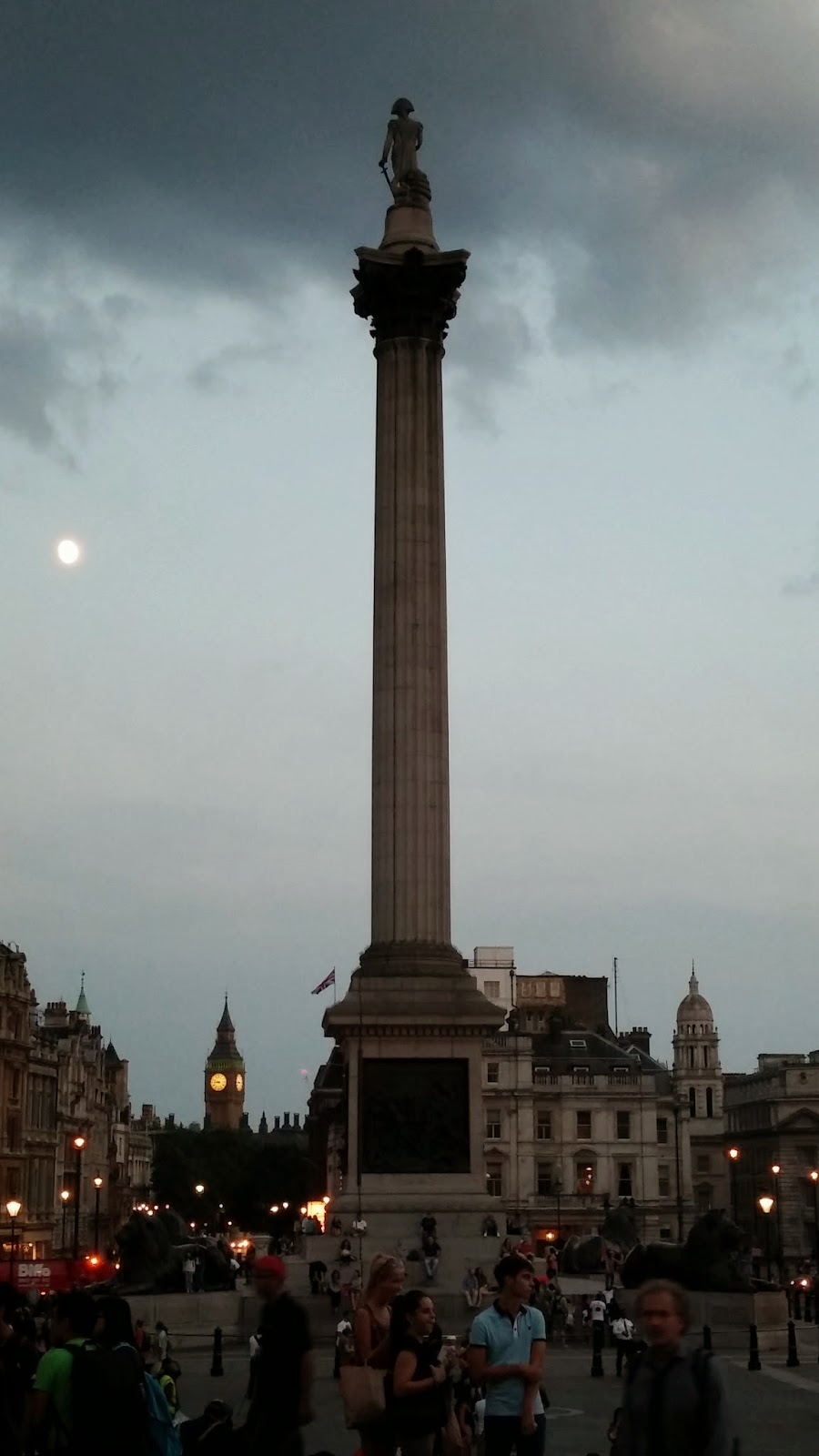 We also paused by the Royal Haymarket where Patrick Stewart himself saw a ghost standing in the wings during one performance of Waiting for Godot. 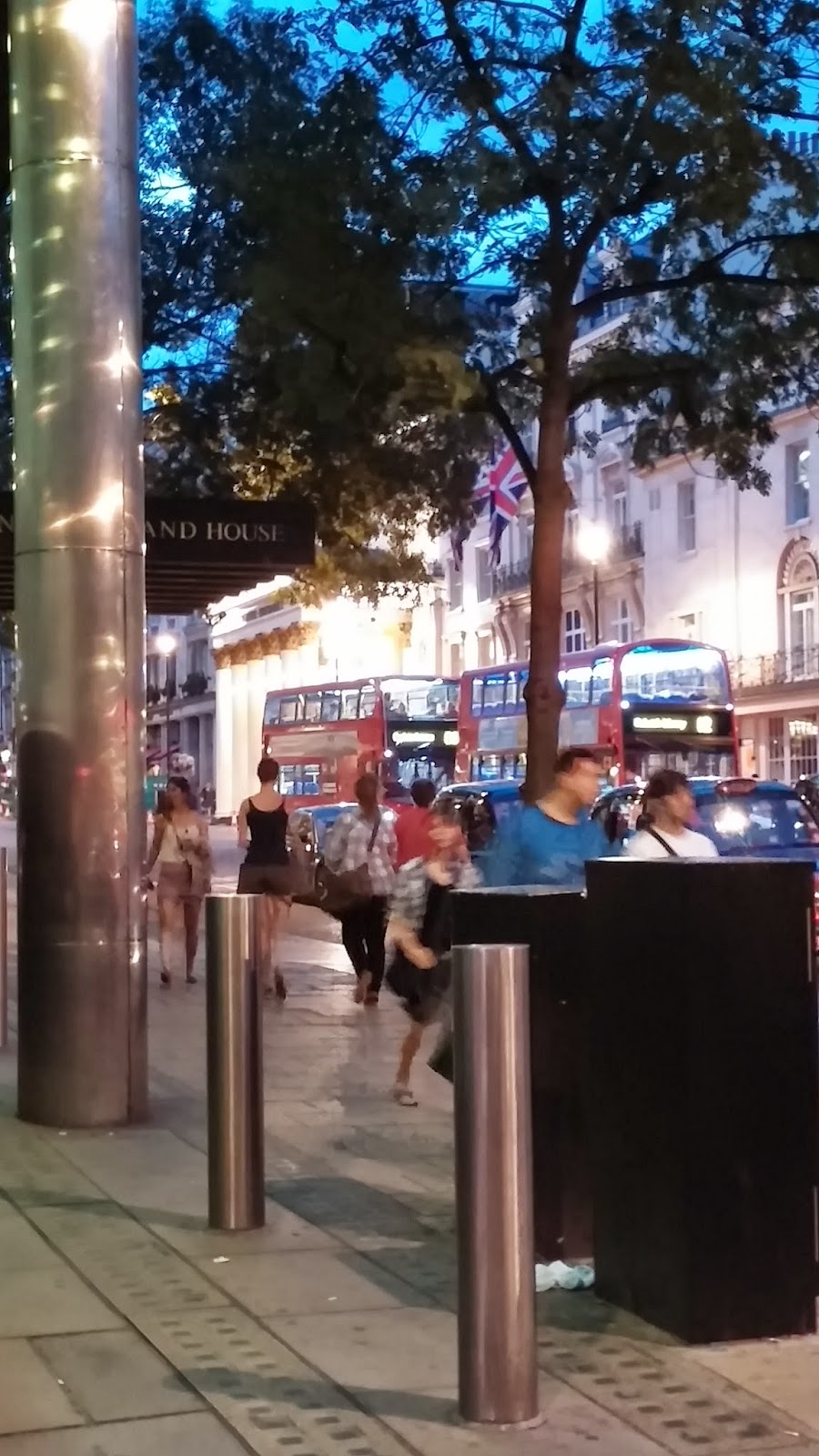 And then continued on into the schwankiest neighborhood in town where all of the ol' boys clubs used to be.  There was a little ghost dog haunting the old German embassy, and we paused to pay our respects at his grave. 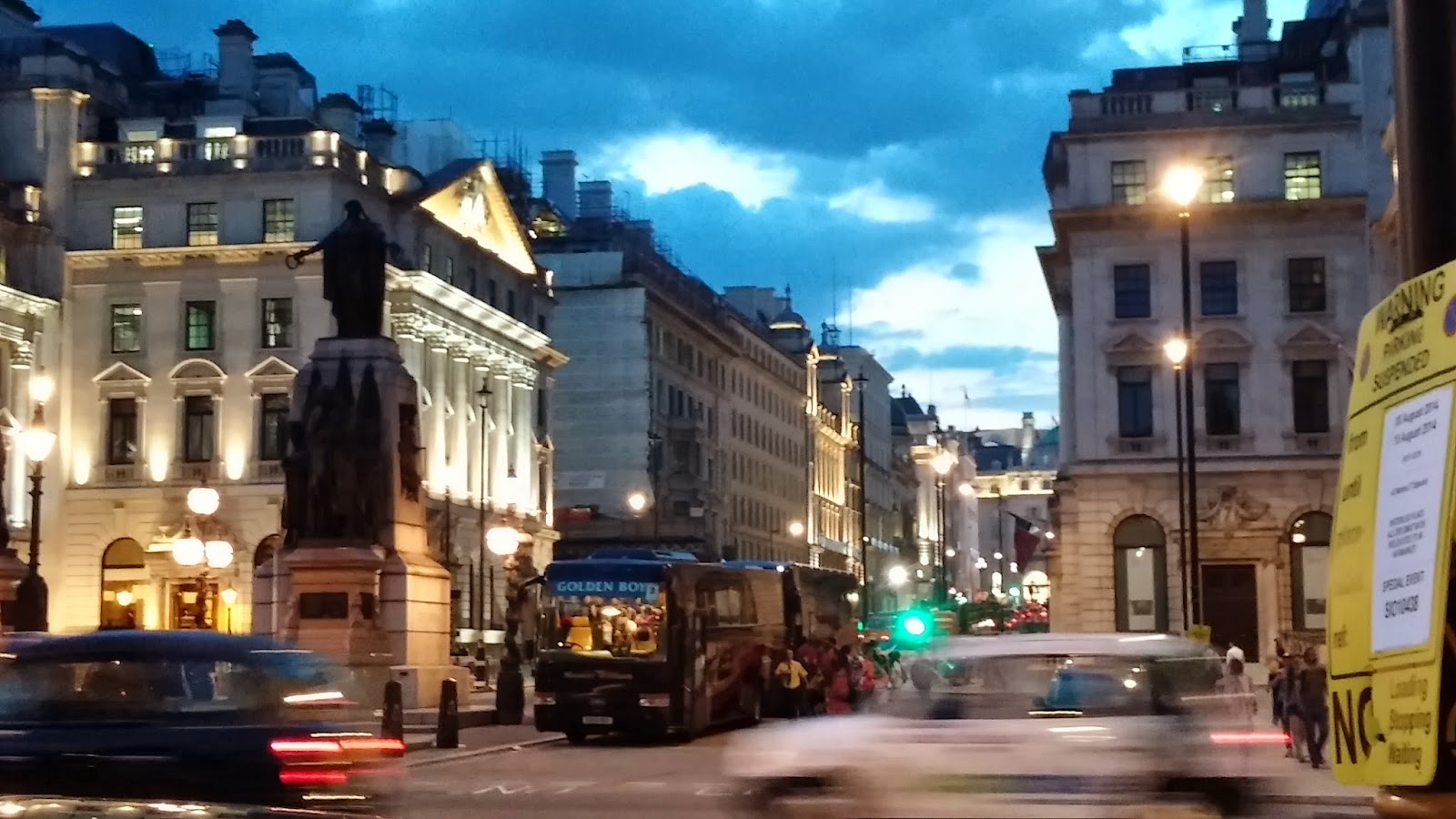 This place was an old hangout for Charles Dickens and a whole club devoted to studying the spirit world (which one can still join today). 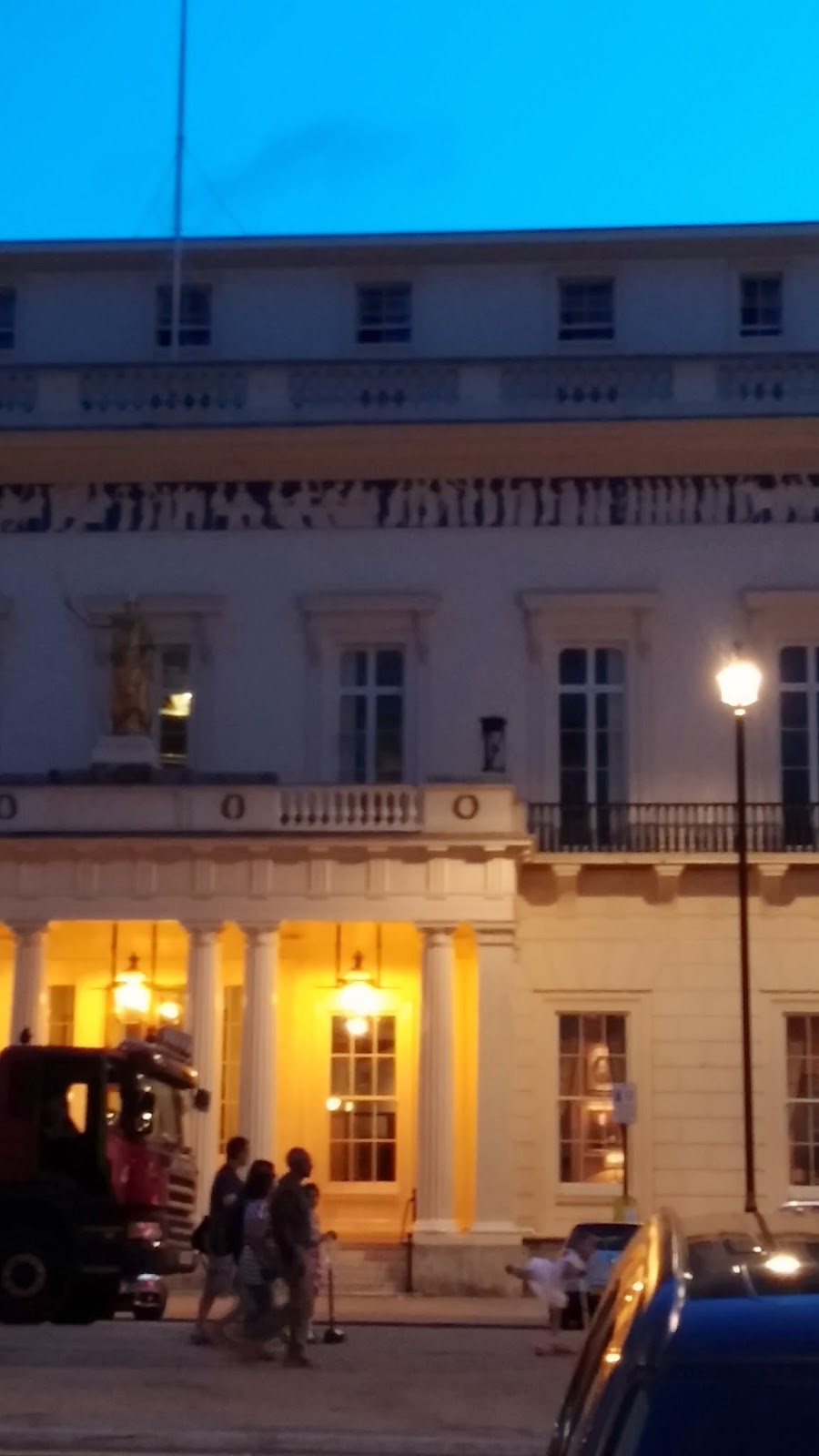 We made our way to St. James Park and had a fabulous view of Buckingham Palace at night.  We saw some ramparts where Anne Boleyn is said to walk around, although she is one of the most frequently spotted ghosts in London.  The girl gets around, if you know what I mean. 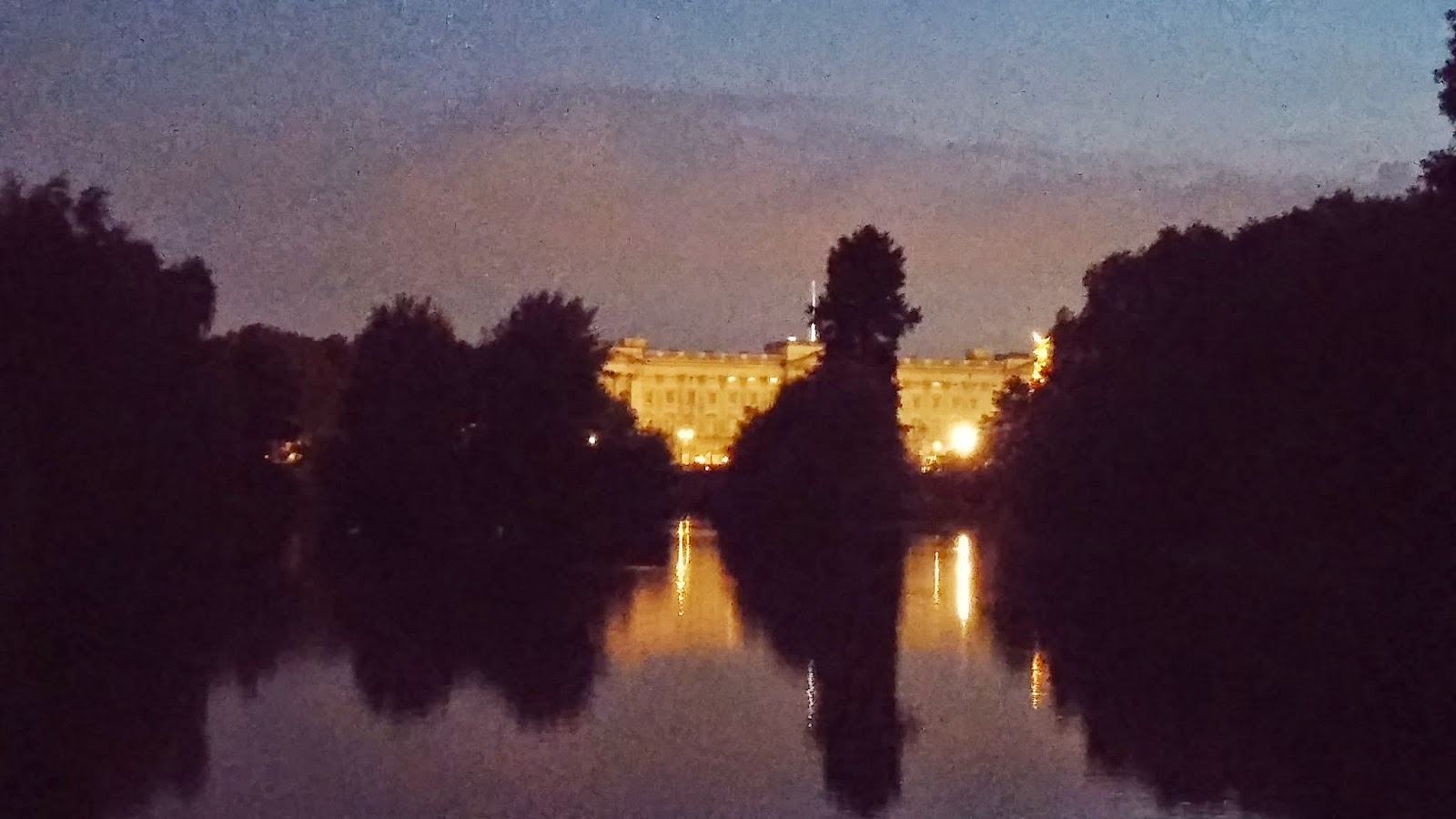 And finally, we ended up on a street where every August 1st, it is said that the ghost of Queen Anne makes an appearance. 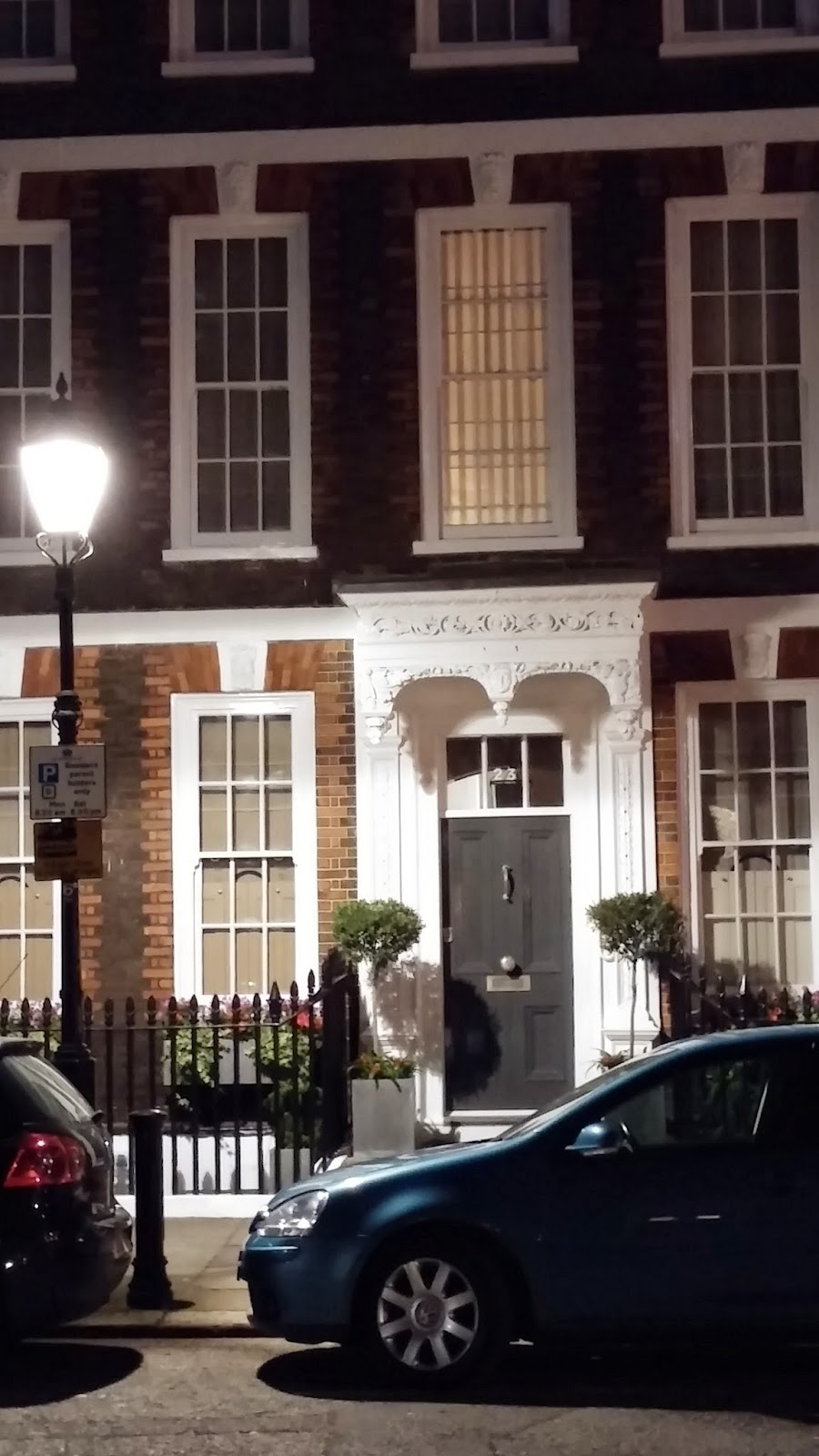 It was an absolutely wonderful night with a great tour guide, fabulous stories, and inspiring sights.  If you ever are in London, DEFINITELY check out London Walks.  This tour was a winner.  There was a metric ton more stories, but must leave you with some surprises in case you go.