Sundays are sleepy in London.  Half the city seems to abide by the "and on the seventh day you rest" school of thought and the other half seems determined to rest when they are dead.  Many of the theatres are dark (as opposed to America where they tend to take Monday nights off), so it seemed the perfect day for an outing.  The sun was shining.  The birds were chirping.  And so I looked through the list of London Walks and picked a tour of the canals of London and a stroll through Little Venice.

Blinking, I stepped out of the Tube station into the sunshine.  Oh where was the gloom and rain promised on this fair isle?  My fair skin was really hoping for a break in all this gorgeous weather.  There were a mess of people gathered round waiting for our guide, who soon showed up. 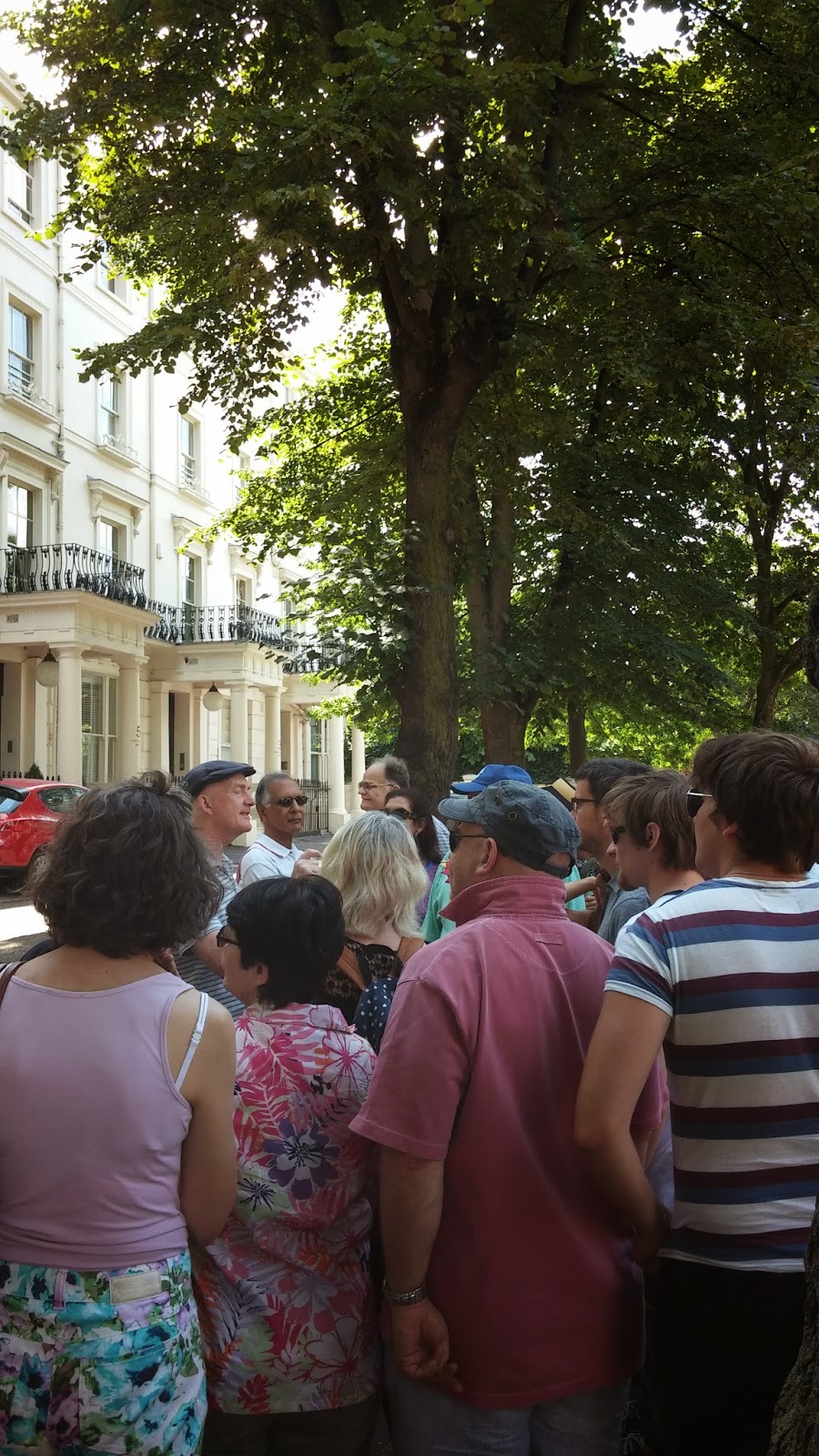 Unbeknownst to me, this part of town is where the rich and famous hang out.  Originally, though, it was where all of the high class gents kept their mistresses tucked away. 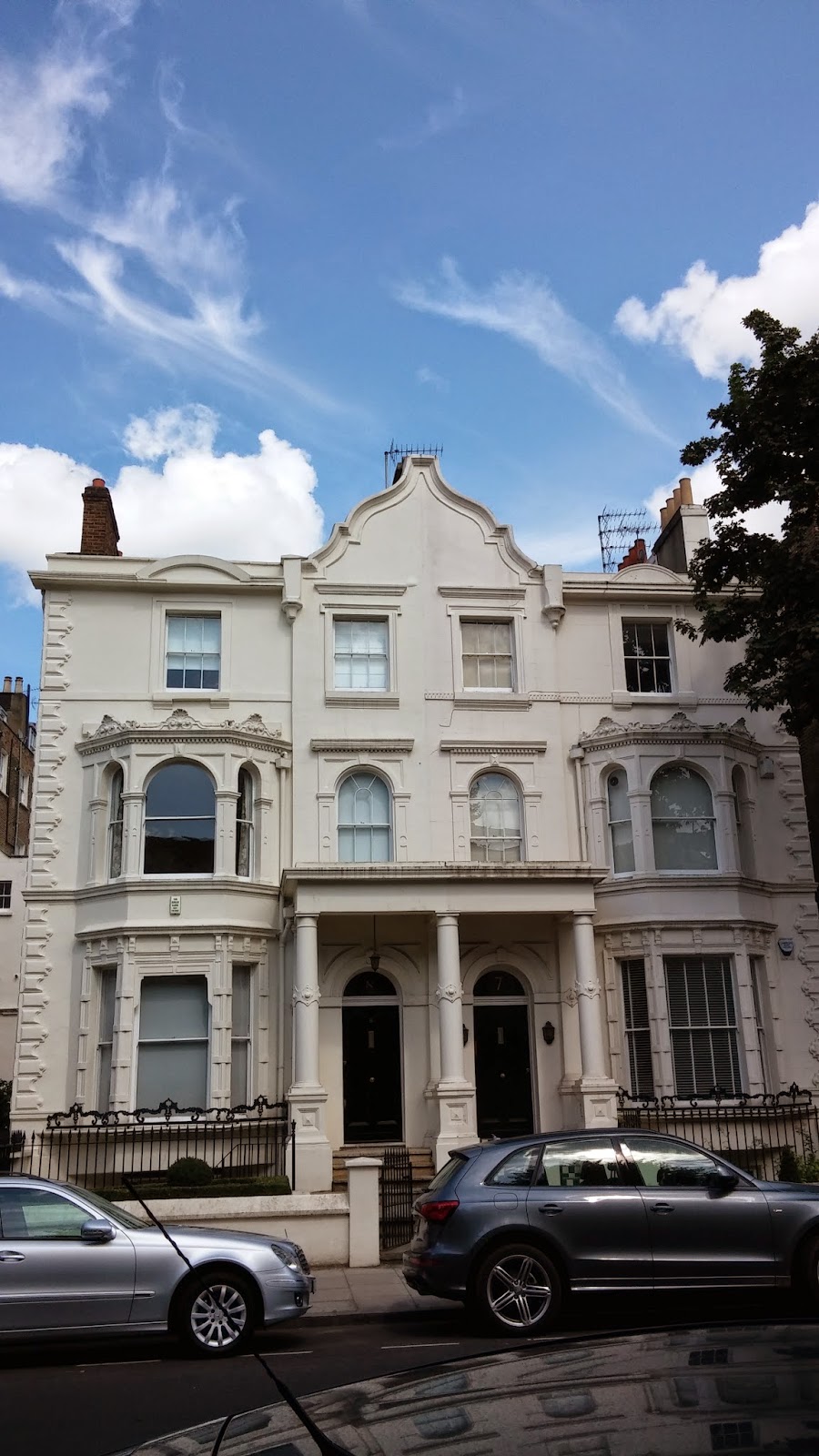 There is a requirement that all your houses be kept white stucco (which must be restuccoed every five to seven years), and your doors and railings painted black.  The going price for an average townhouse in this neighborhood is £14M.  Let me scrounge around my sofa and get some spare change from the cushions. 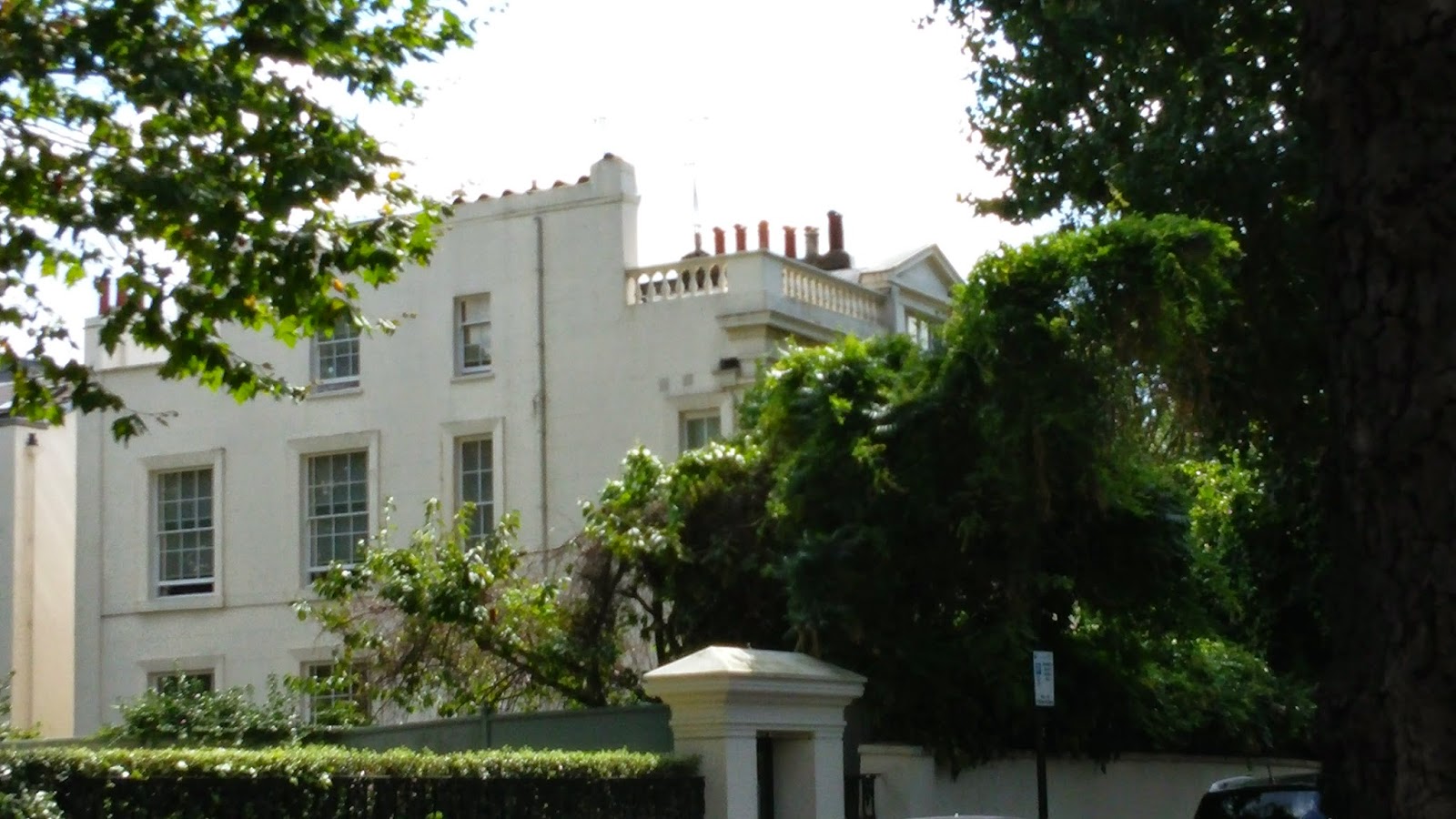 This unassuming little house was the home to Paddington Bear's creator.  During WWII, when the children were being evacuated into the country, they would often be seen sitting at a railway station with a sign hanging around their neck with their name, waiting for the appointed family to take them in.  It was said that these children were the inspiration for Paddington.  I must say, I got a little misty eyed and will never look at those books the same.

We then wandered down to Regent's Canal, a series of waterways running throughout England. 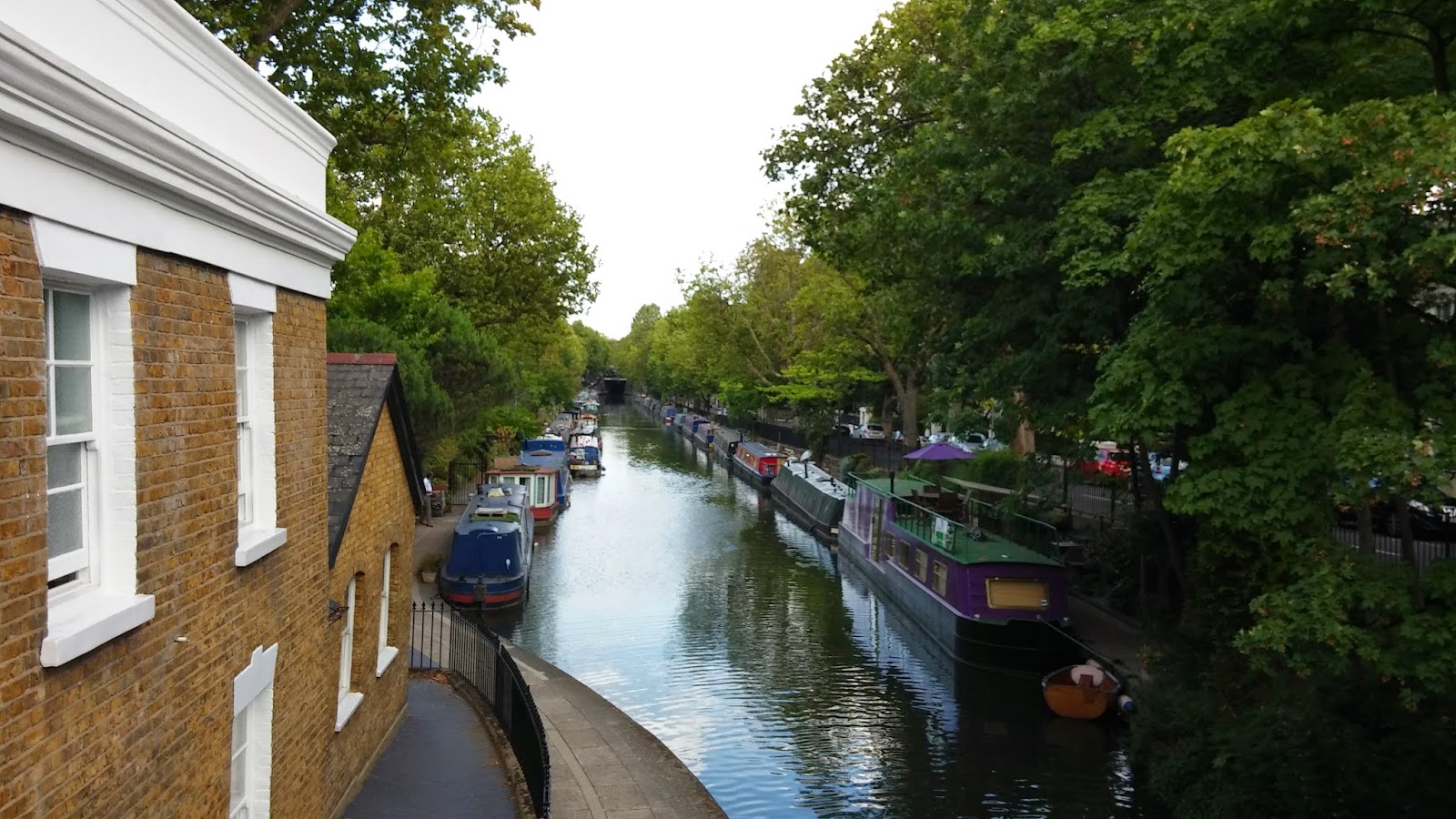 Back in the day, they figured out a horse could pull a much bigger load by water than by land.  So, they would load up the barge and the horse would walk along that side path bringing goods up and down the canal.  The canal itself is not very deep, because they didn't need to be.  Dug by a group of strapping bruisers from Ireland, they are just deep enough for a flatbottomed boat (about 5ft).  They were also shallow because horses frequently fell in.  There are ramps at regular intervals specifically for any unfortunate equine.

Then came the dawn of the railroad, rendering the canals useless... almost.  The railroads refused to carry gunpowder, so all munitions were carried throughout England via these canals, until one fateful day when a load exploded sending a boat sky high.  It crashed into a building and cut its way through four stories into the basement.  It blew up the bridge near the zoo, which fell into several of the cages setting the animals free.  Not a good day.

Today, you can rent a barge and float up and down, seeing the English countryside at a leisurely 4mph (speed set by the speed of the horses). 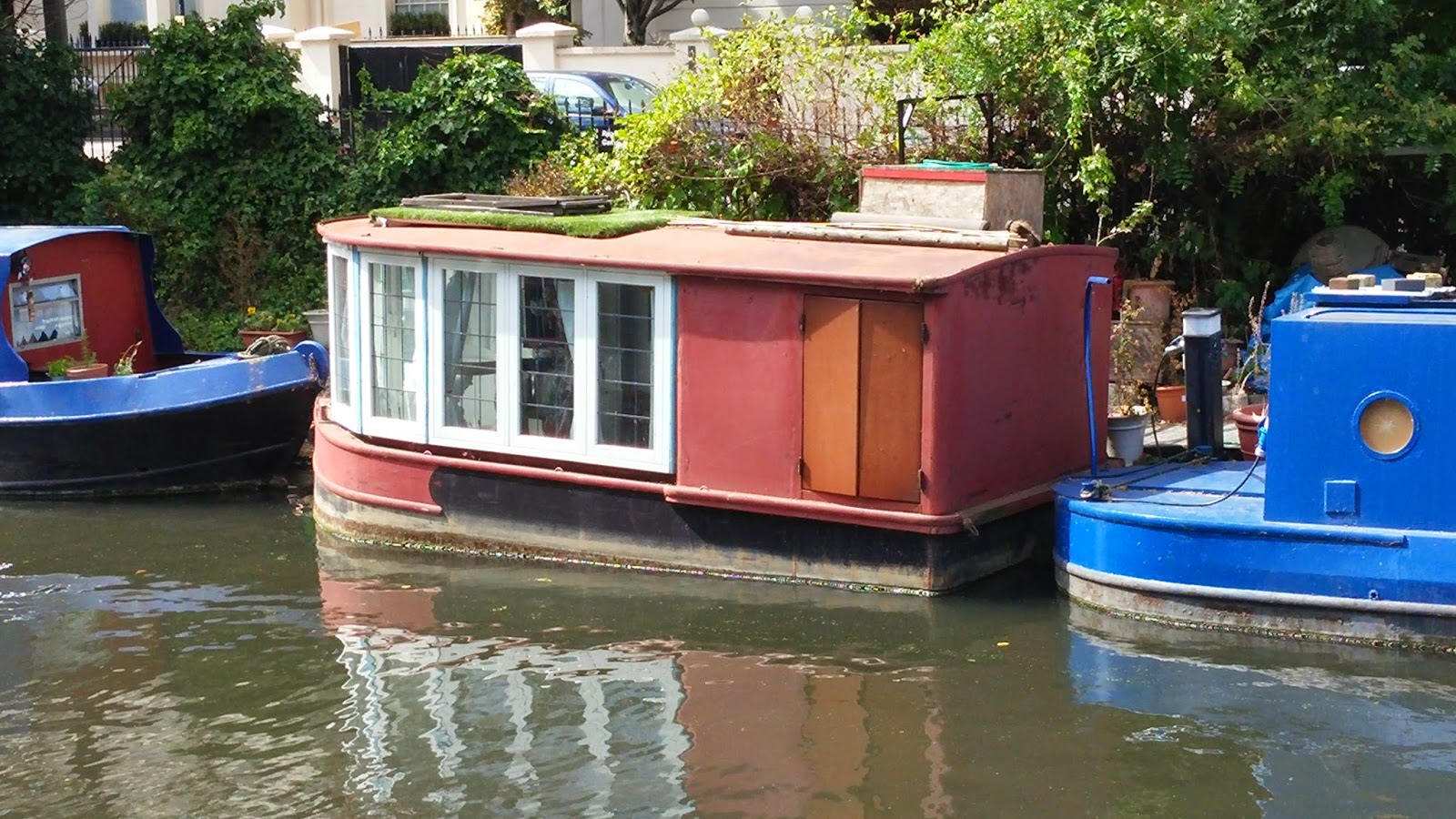 The canals were just a few decades ago the "rough" parts of town.  Many communities filled them in with concrete.  But it came to light that people enjoy living by water.  After the success of the Camden Locks neighborhood, many other cities tried to replicate their model and now some of the most picturesque areas are along these canals. 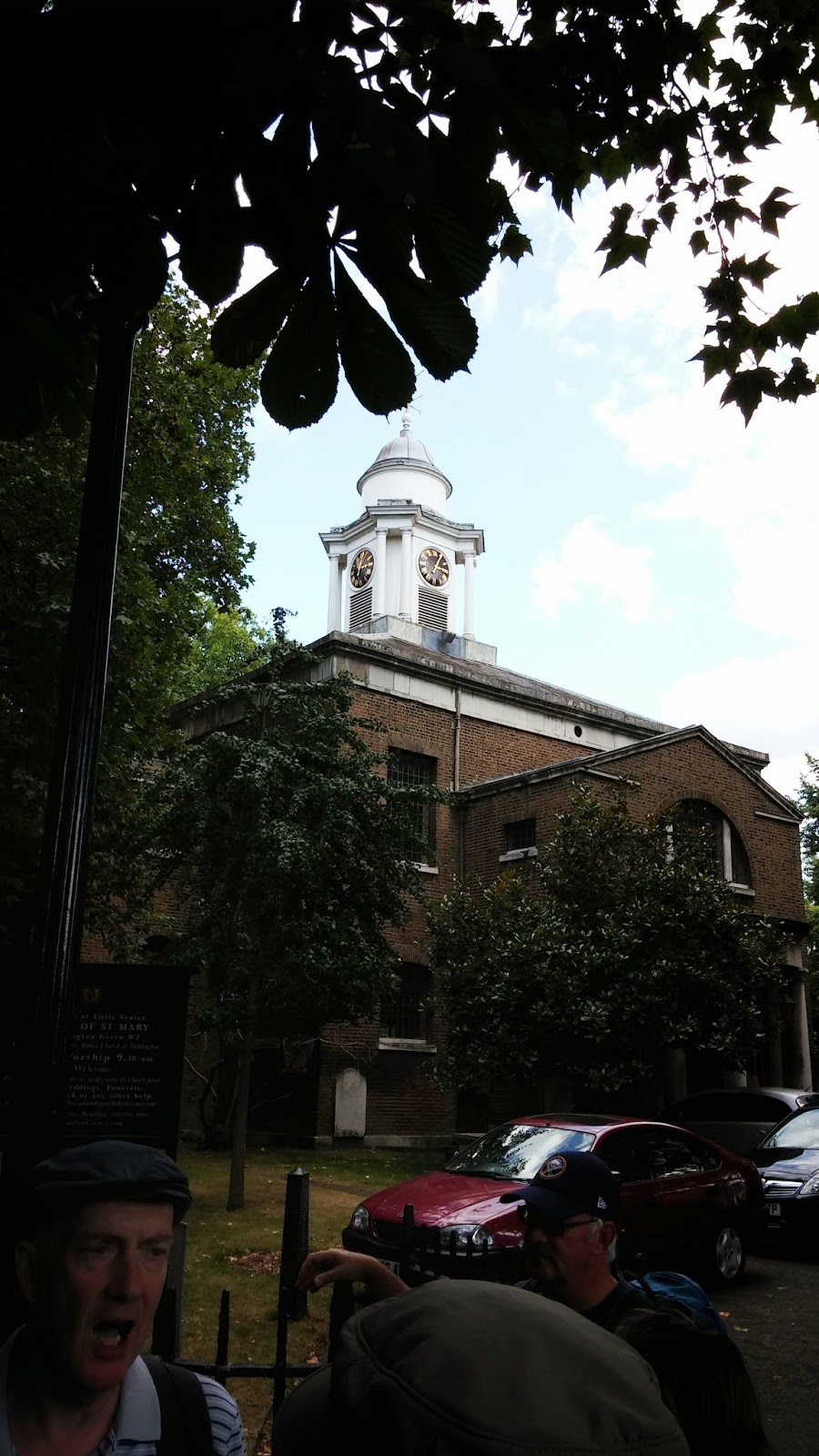 We left the waterways and headed off to St. Mary's.  This specific iteration has been around since 1791, but we were told that a church has been standing on this ground since the 12th century.

Just around the corner was a statue of a woman in a chair.

We were informed that this was the very first statue of a non-royal/non-goddess woman in all of London.  The statue was of actress Sarah Siddeons.  The outpouring over her death was so great, they built the statue in her honor.  She is buried at St. Mary's. 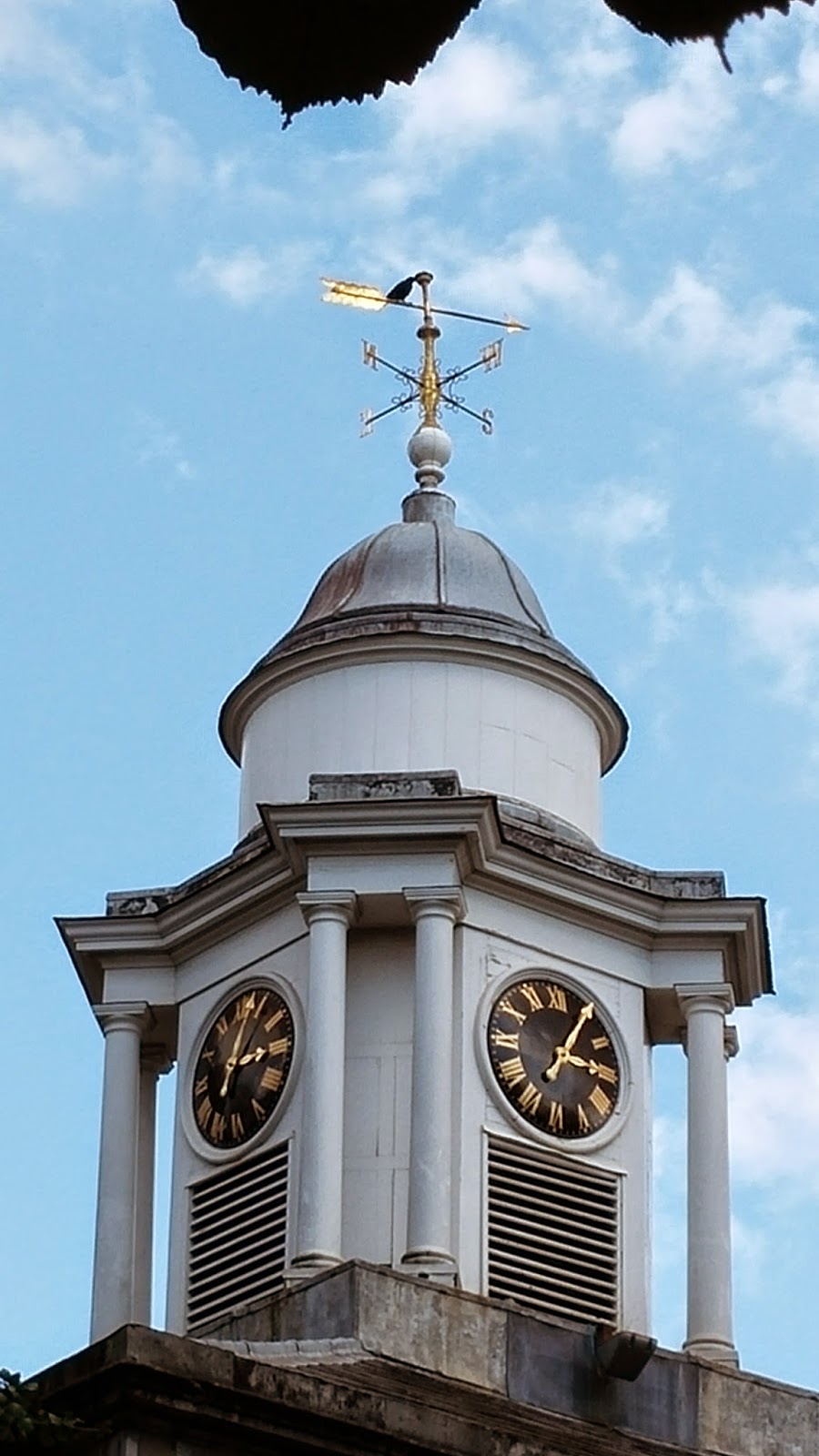 We returned back to the canals and stood on the banks of where three of the canals meet up. 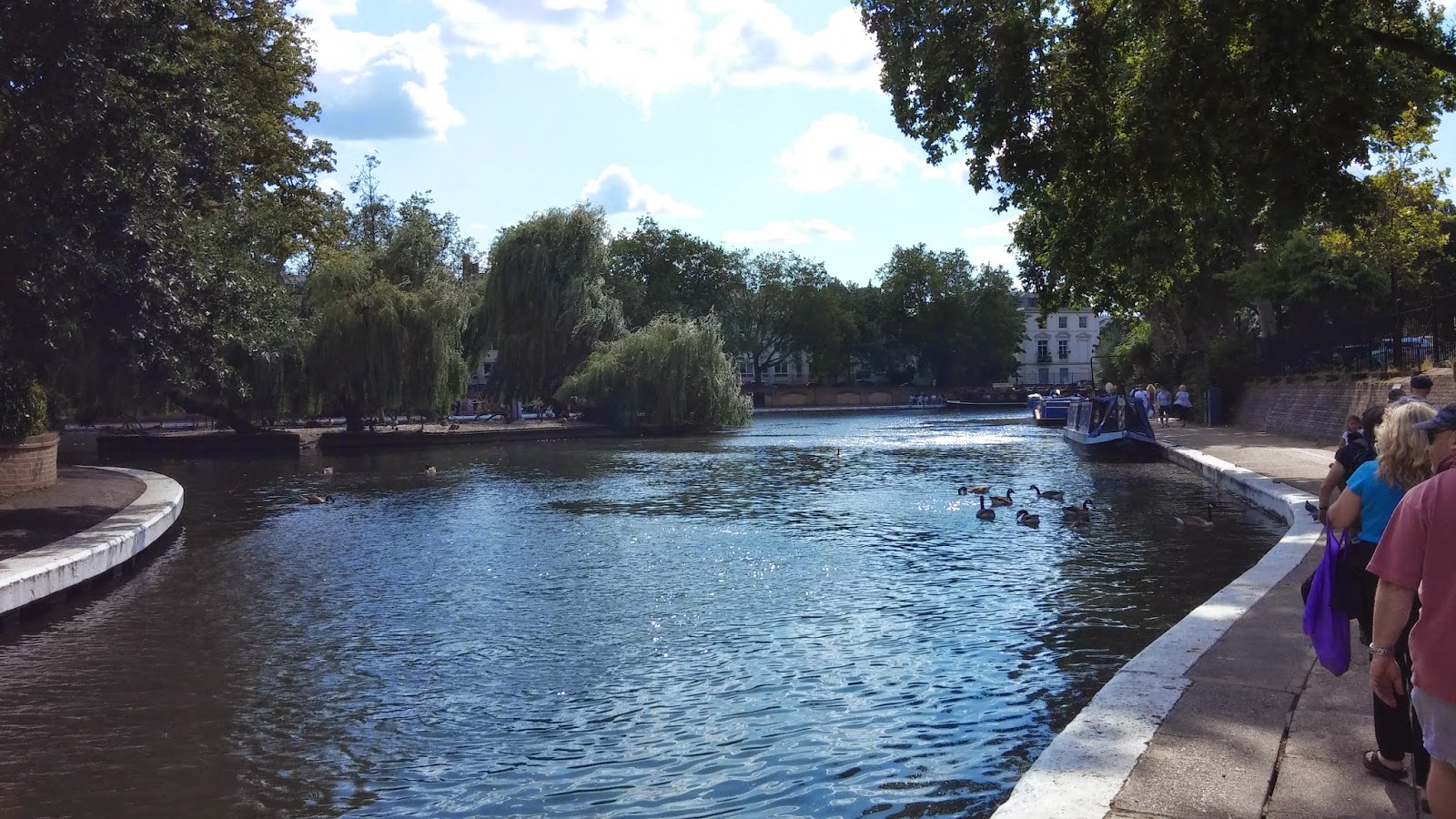 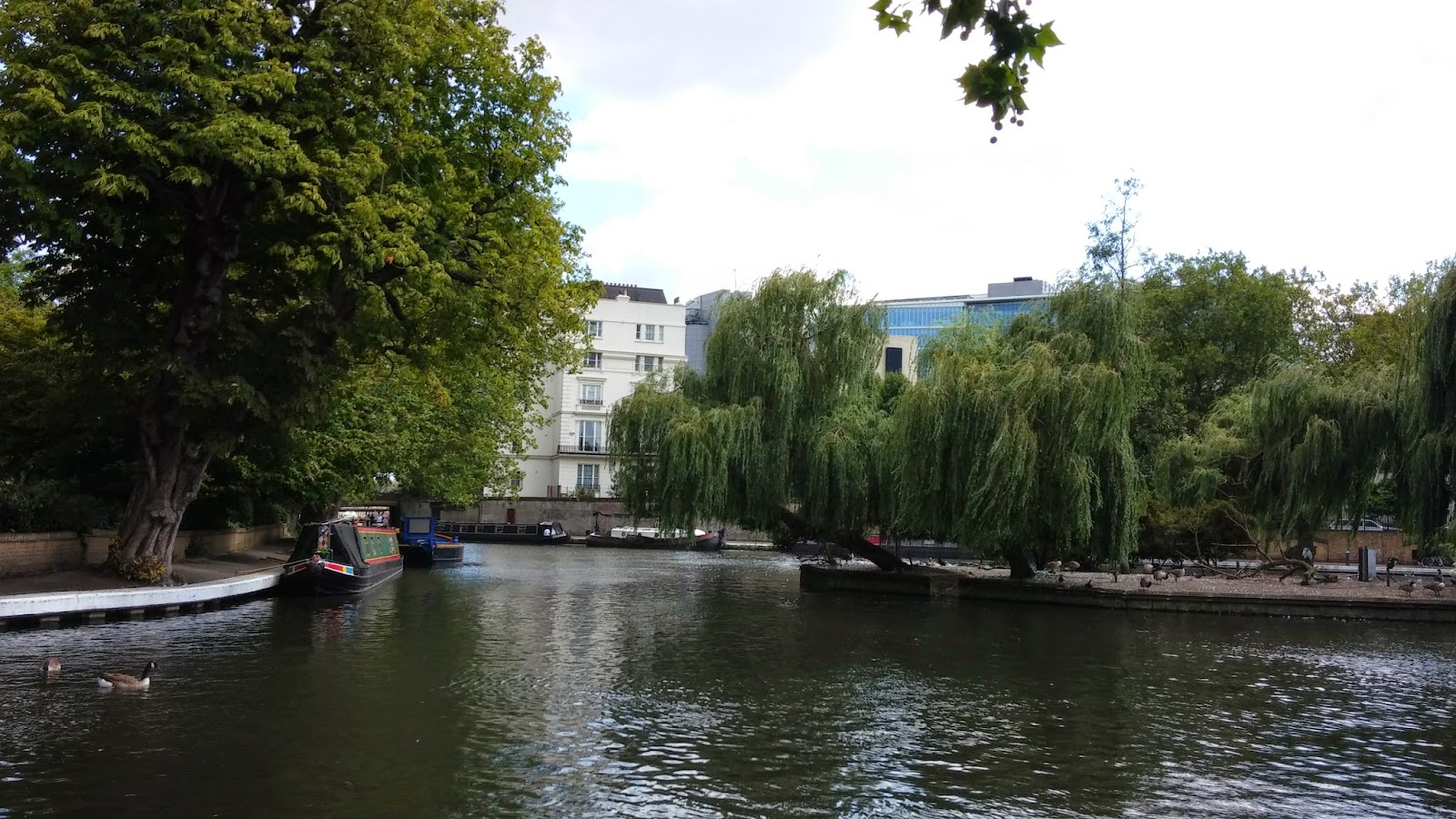 Robert Browning lived on the banks of the canal and is rumored to have planted all the trees on that little island to the right. 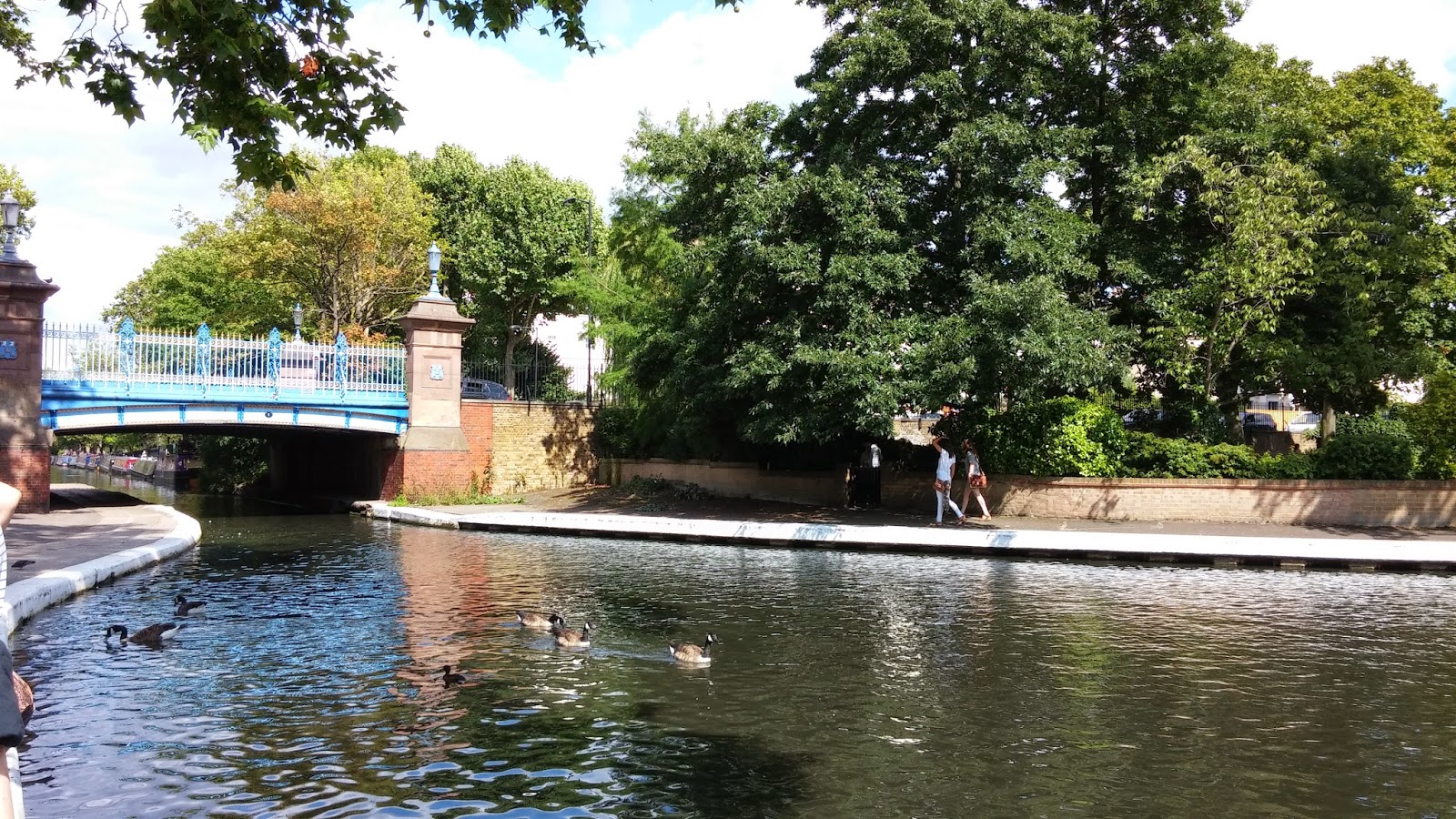 We continued along the tow path and headed back up to the street. 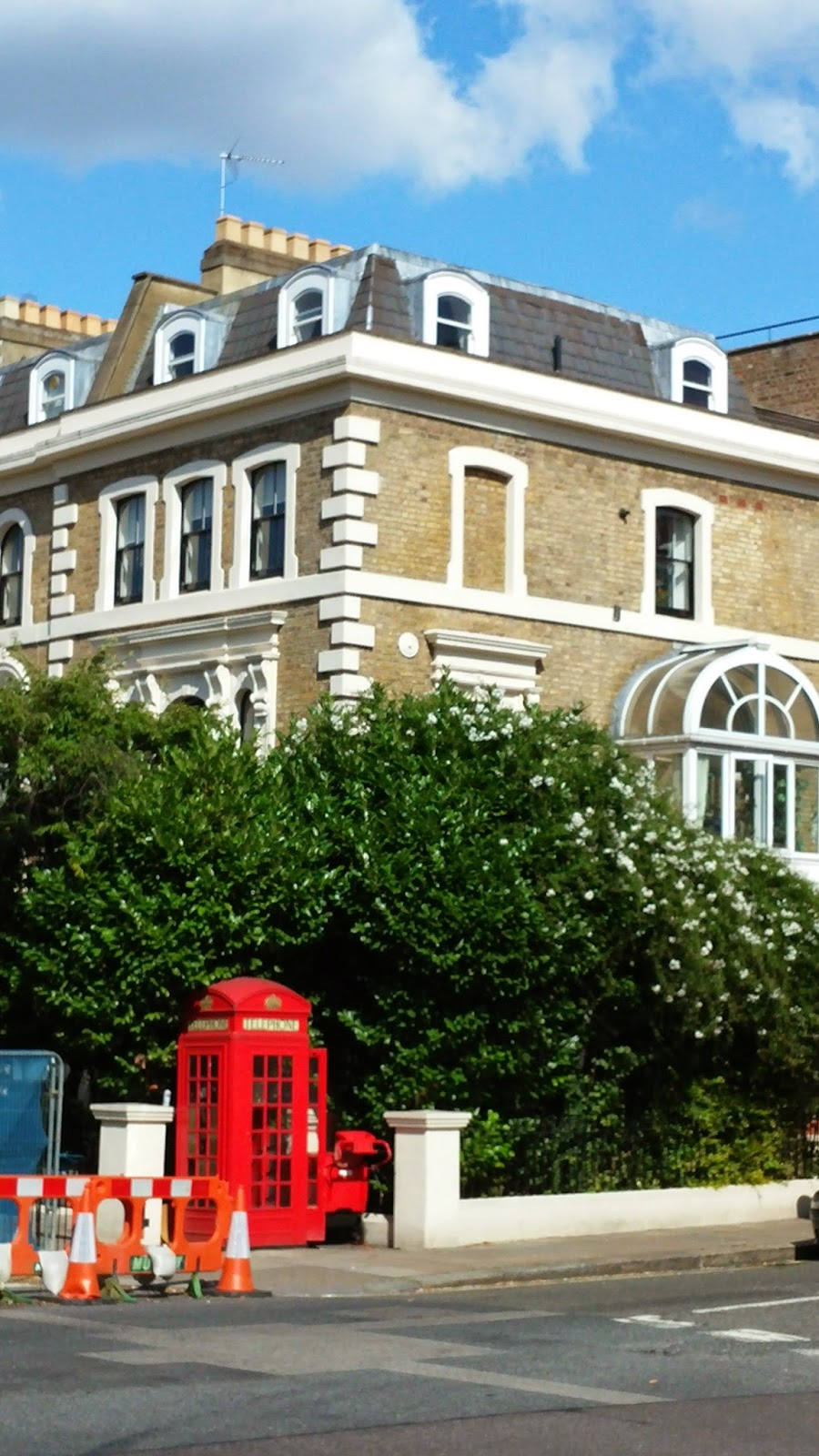 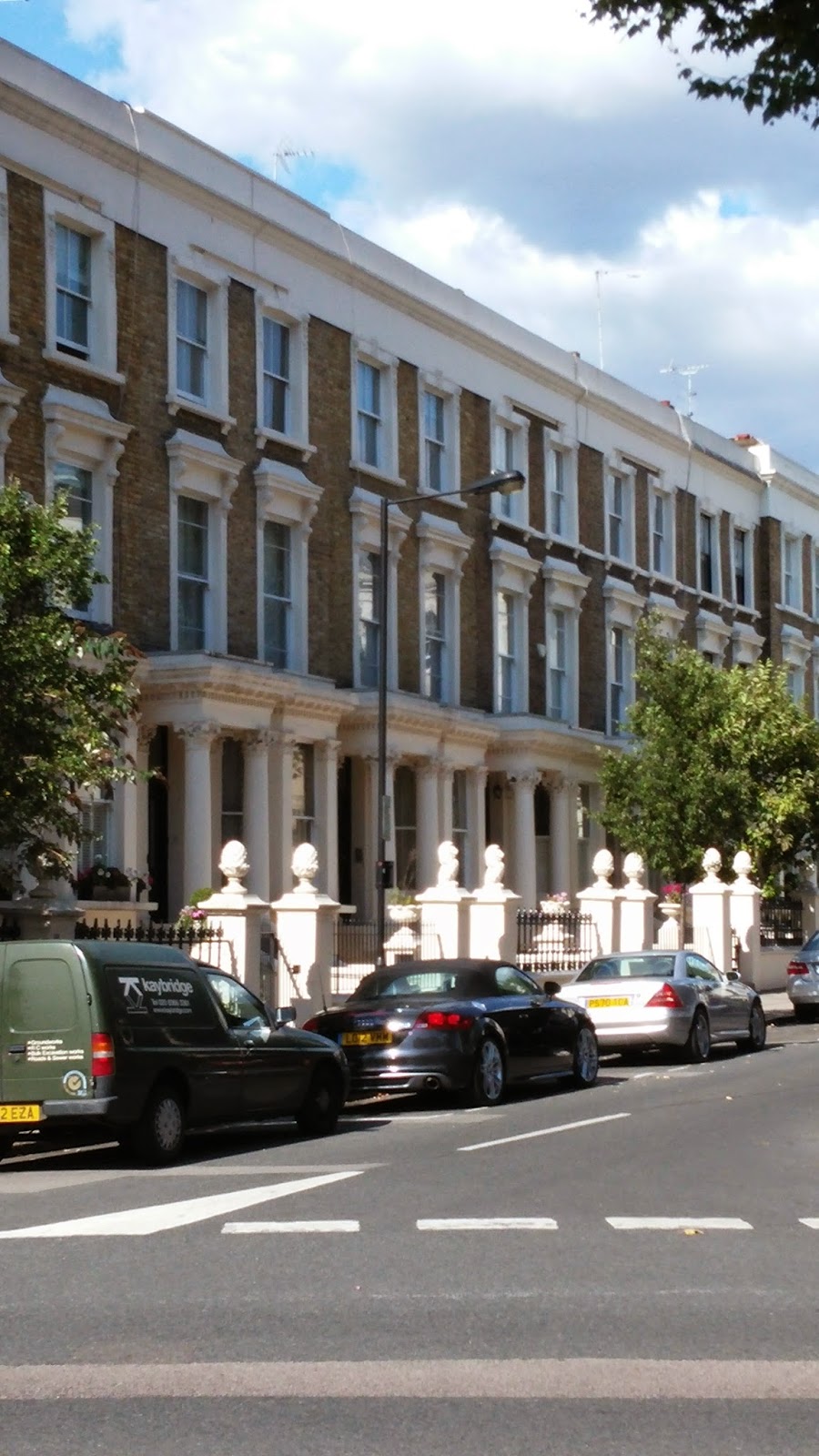 To have pineapple shaped statuary in front of your house was to indicate great wealth.  Pineapples were so rare and so expensive, you could actually rent them back in the day for your table.  You would not be allowed to eat it, but would often invite your friends over to gaze upon the wonder of this glorious fruit. 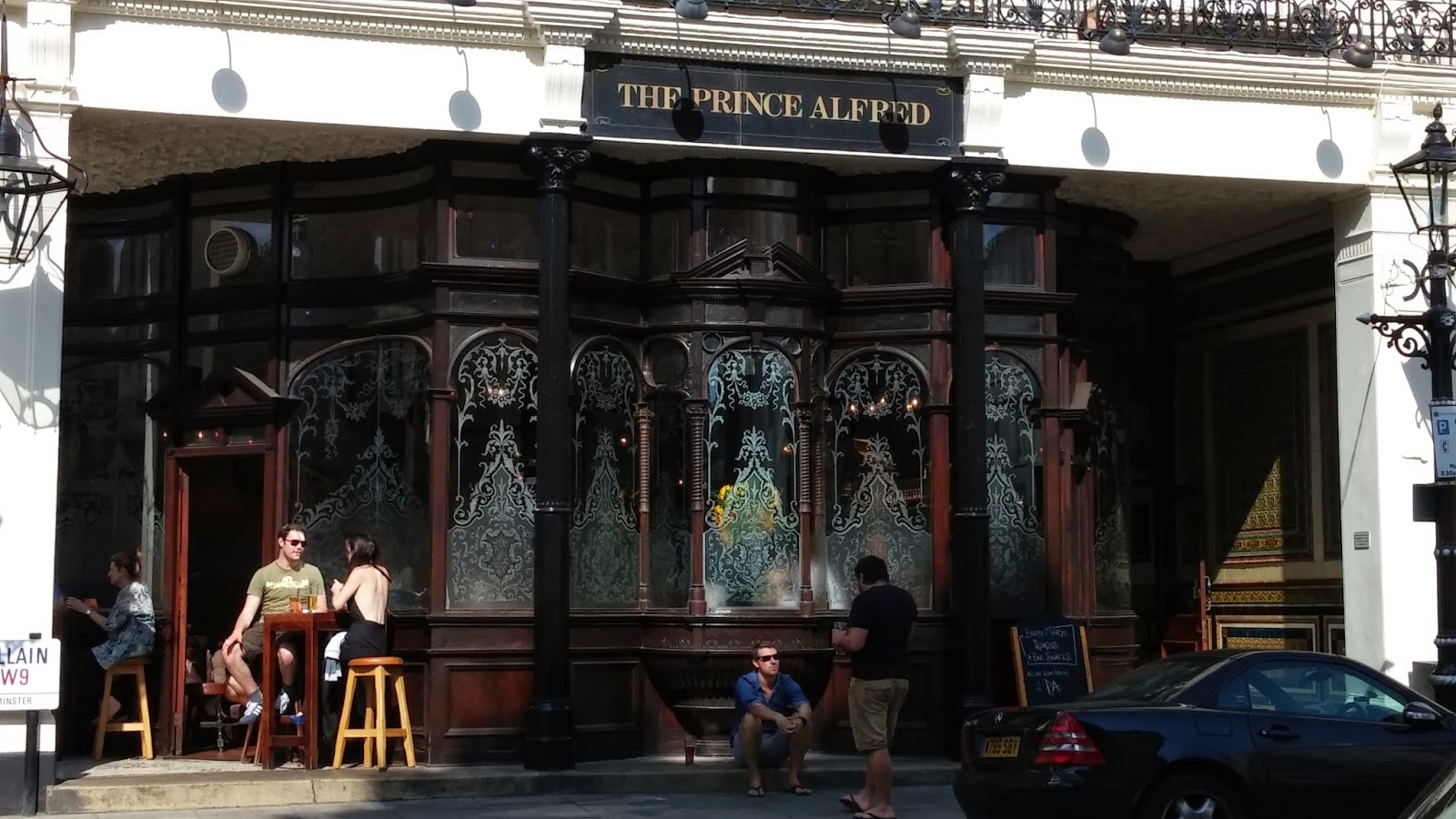 This pub is on my "get back and check out" list.  The interior is original carved oak and features "snob screens".  You can close yourself into your booth so as not to have any lookers-on.  I thought the curved etched glass was absolutely exquisite.

We finally ended up at this lovely hotel.  It was, at one point, a maternity ward where Alan Turing was born. 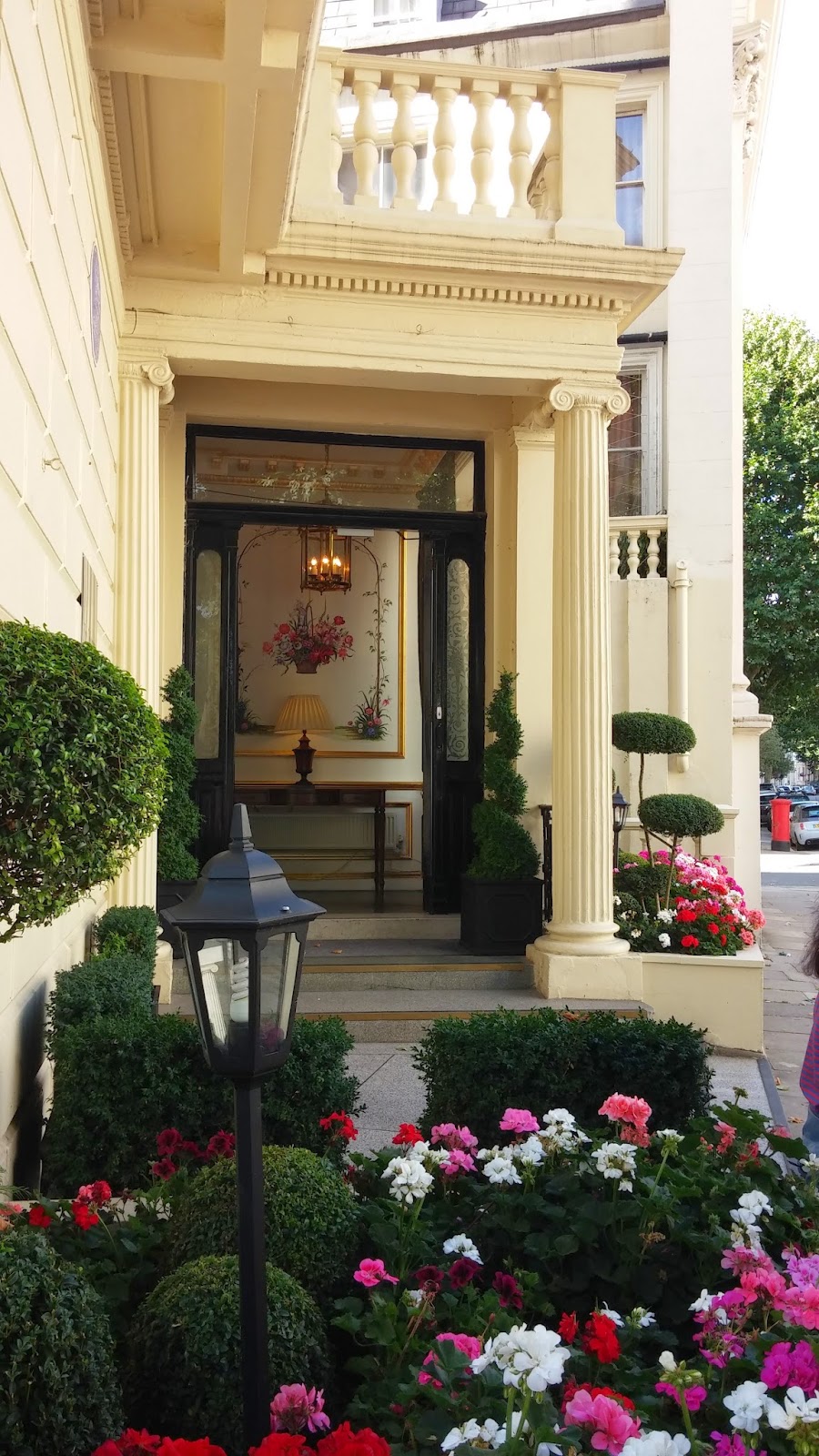 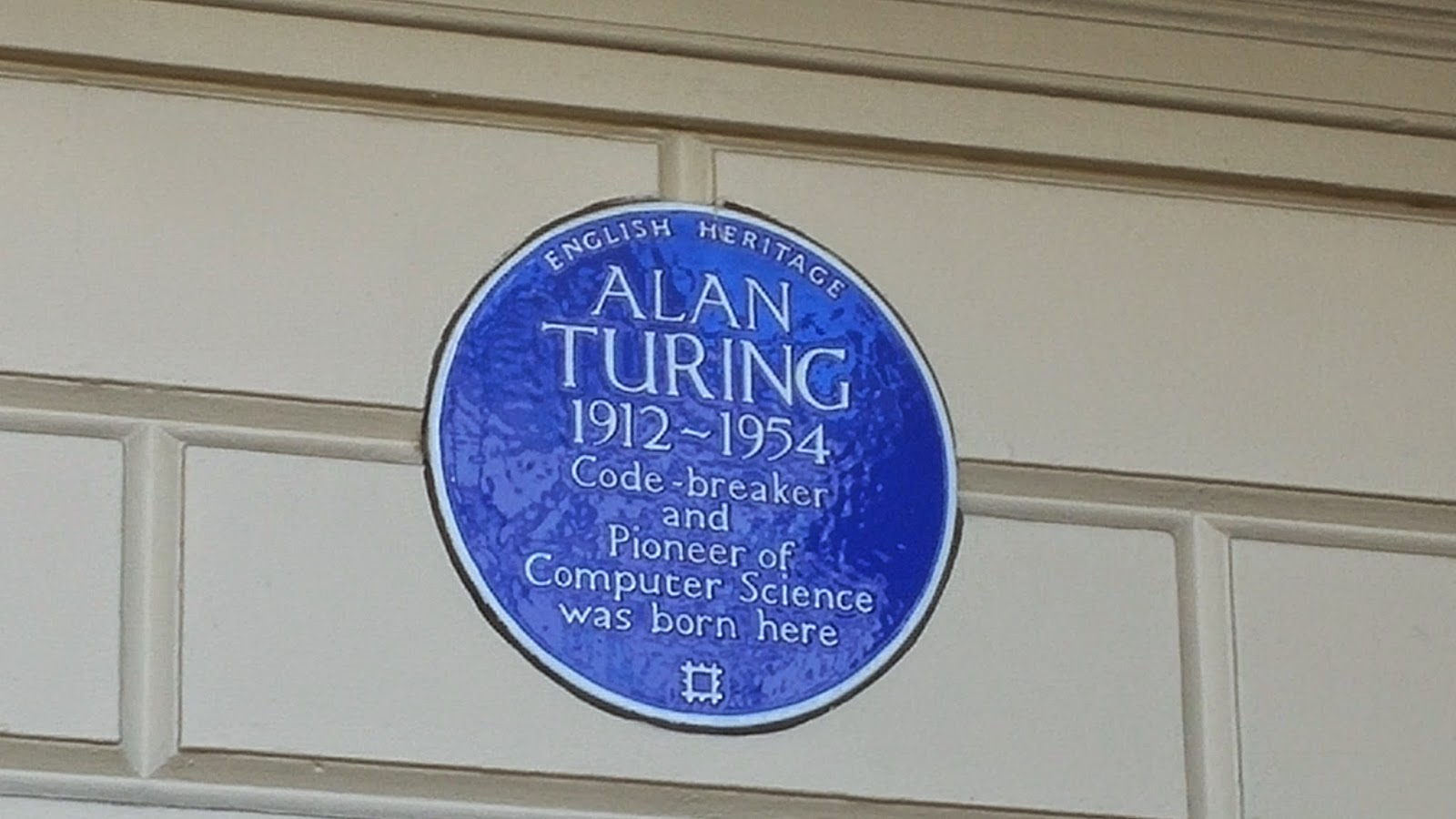 Alan Turing was the man responsible for cracking the Enigma code and he and his team at Bletchly Circle were credited by Winston Churchill for winning the war.  Sadly, in the years that followed, his apartment was burgled by a male ex-lover.  When he reported it to the police, they did not pursue the burglar, they turned on Alan for his homosexuality, and forced him to endure chemical castration.  It drove him mad and he died at age 42.  Just recently, the criminal charges against him were dropped and an official apology issued for the treatment of this international hero.
Posted by Kate Danley at 12:50 AM