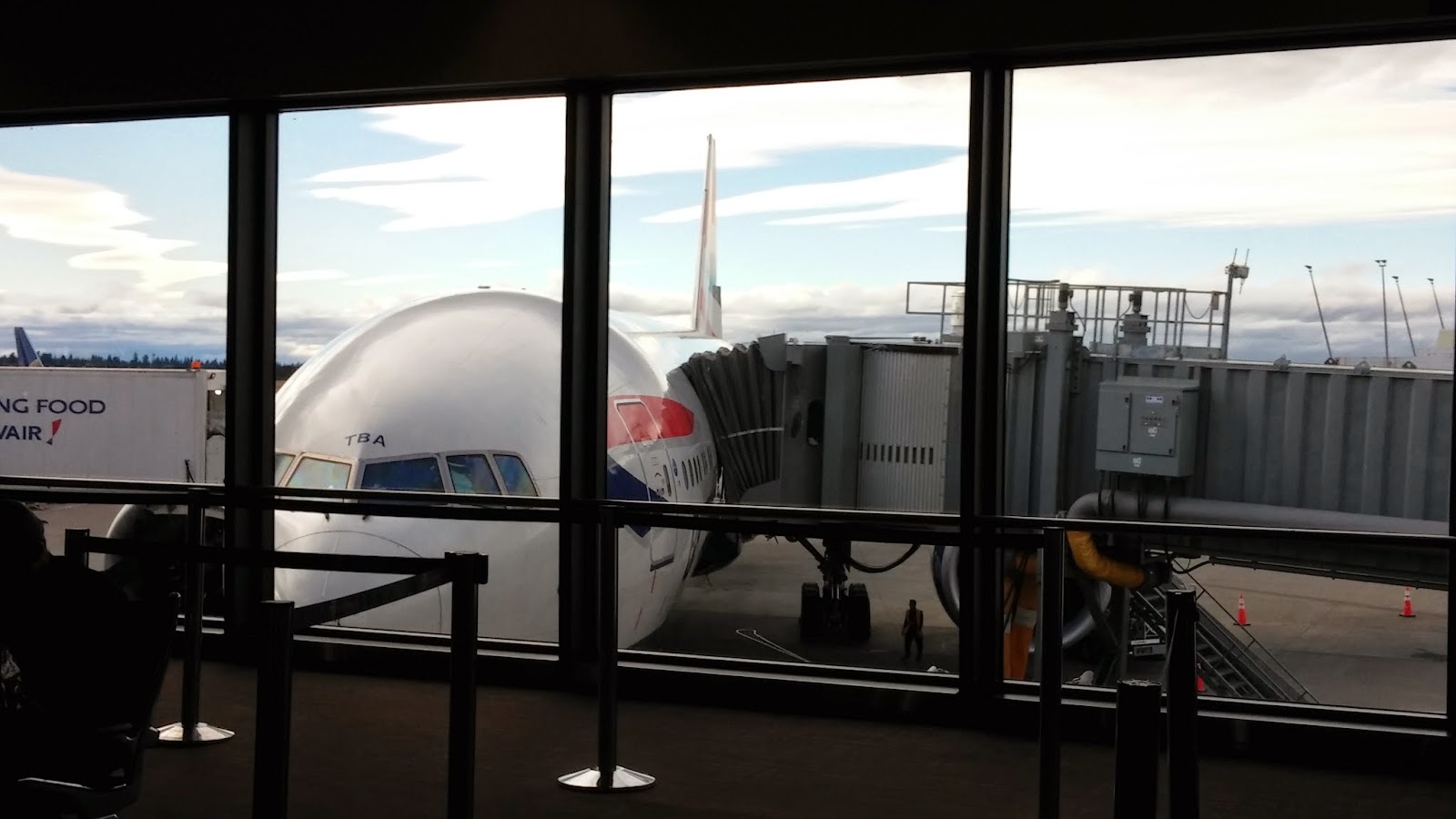 I boarded the Boeing 777 Dreamliner (how apropos) and headed out of dodge.  I thought I was just upgrading to the "don't stick my knees into my ears" leg room section (really, spend whatever you have to in order to get out of the cattle section on these long flights.  You think it is going to be okay.  It is not.  Any. Money. It. Takes.), but turns out I upgraded to the fancy not-quite-business class.  How precious is that moment when a flight attendant offers you a lukewarm cup of water before take-off.  Behold!  I am world class!

I was seated next to a large man who was taking full advantage of the complimentary wine and, evidently, from the amount of shifting he felt necessary, had shorts on that were binding in unpleasant places.  Around about hour four, he decided to move next to his girlfriend... wife... someone across the aisle who had an entire row to herself.  He made sure to apologize for moving, though, and reassure me that it wasn't me.

There was a moment at takeoff as we lifted off.  The entire gray city was swallowed by a cloud, then white nothingness, and then the sun burned through and we were above.  As we flew, the sun was a the right place to create circular rainbows that followed us.

I have done this enough to be prepared, but British Airway gave me a free goodie bag of flight awesomeness.  Soon, I was swaddled in my complimentary flight blanket, complimentary ear plugs, complimentary socks, my neoprene sleep mask, the perfect neck pillow, and inflatable footrest.  I wondered that an airline seat could actually recline 45 degrees (I wondered especially as the guy in front of me reclined to 45 degrees).  I watched some TV.  I ate some real food on real dishes that actually can break.  I slept.  I slept through breakfast.  The cheery attendant did a stellar job pretending that she was only too happy to bring me some coffee as I finally emerged from my cocoon.

Heathrow was a dream getting out of, the lines short, the customs agent surprisingly chatty and welcoming... I think it was because everyone was so grateful to be indoors in a place with air conditioning.  Good lord!  I arrived in the middle of "muggy" season.  Never have I sweated so much!  The sweat and the sleep deprivation led me to make poor choices on the Tube.  The walking.  So much unnecessary walking.  With a big bag for my five week trip.

Finally, I arrived at the student housing.  A very dear girl at the front desk who was probably born when I was graduating collage had to explain to me twice how to figure out where my room was.  Hi!  I'm old and get confused easily!  The room itself was darling, but the one window opens about three inches (I'm sure so that anyone bigger than three inches around can't leap to their death while in the midst of heat exhaustion jet-lagged madness).  I tried to lie down, but, now this is going to sound crazy, but there are people in a city and they like to talk and drive cars.  I dutifully put on my shower shoes to rinse off the travel crud, but forgot my shampoo and suddenly it was TOO MUCH!

I had reserved a hotel room ages ago (non-refundable, of course) in case there was some problem with the housing, and I decided why not go use a real shower.  So, it was off to South Kennsington!

I spotted a pigeon that looked like he could have been carved from marble. 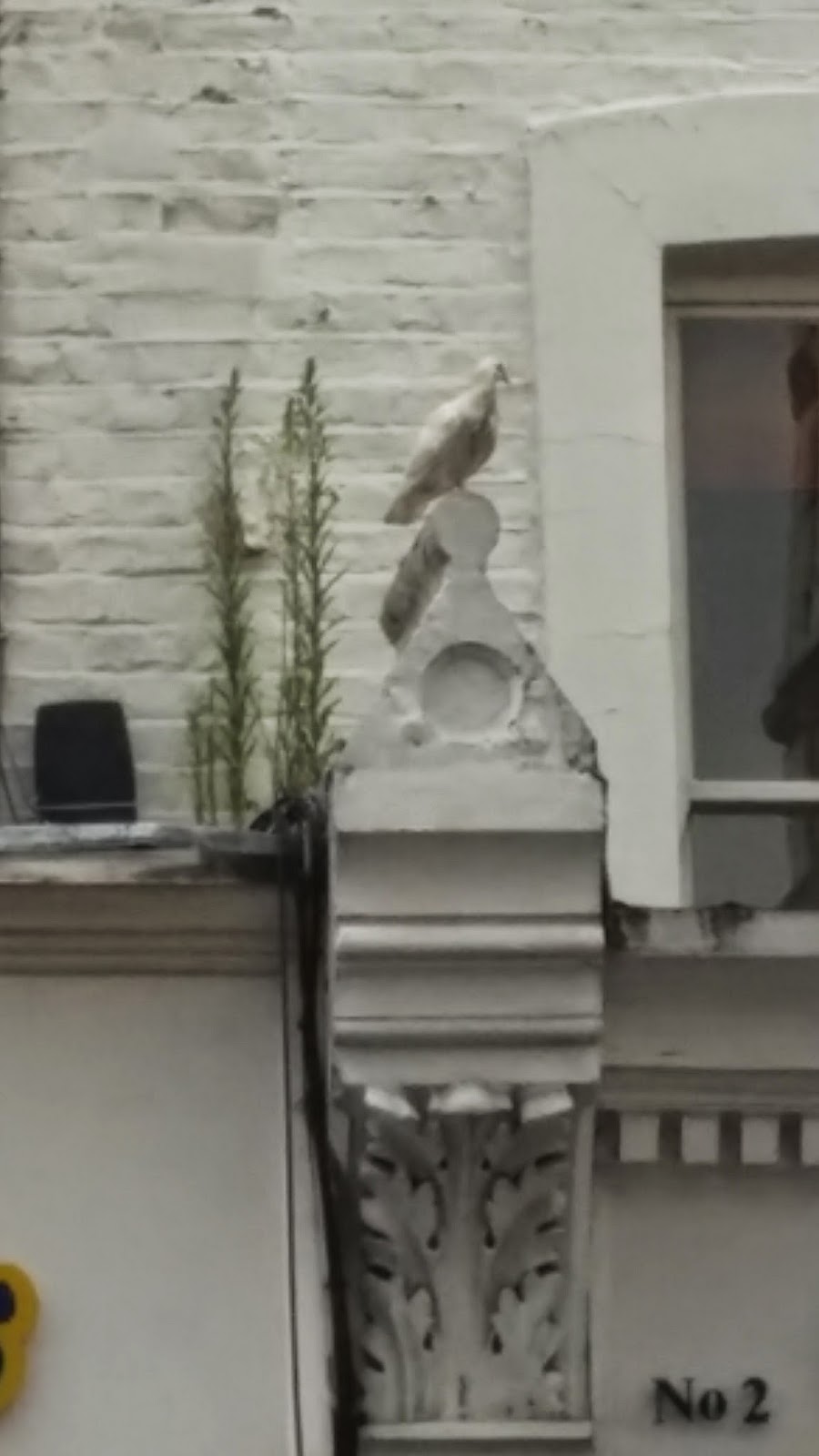 I wandered around lost for a bit, but finally made it to my little hotel.  It had been described as having "character".  Character means "no air conditioning".  But at least this window opens a whole 24 inches. 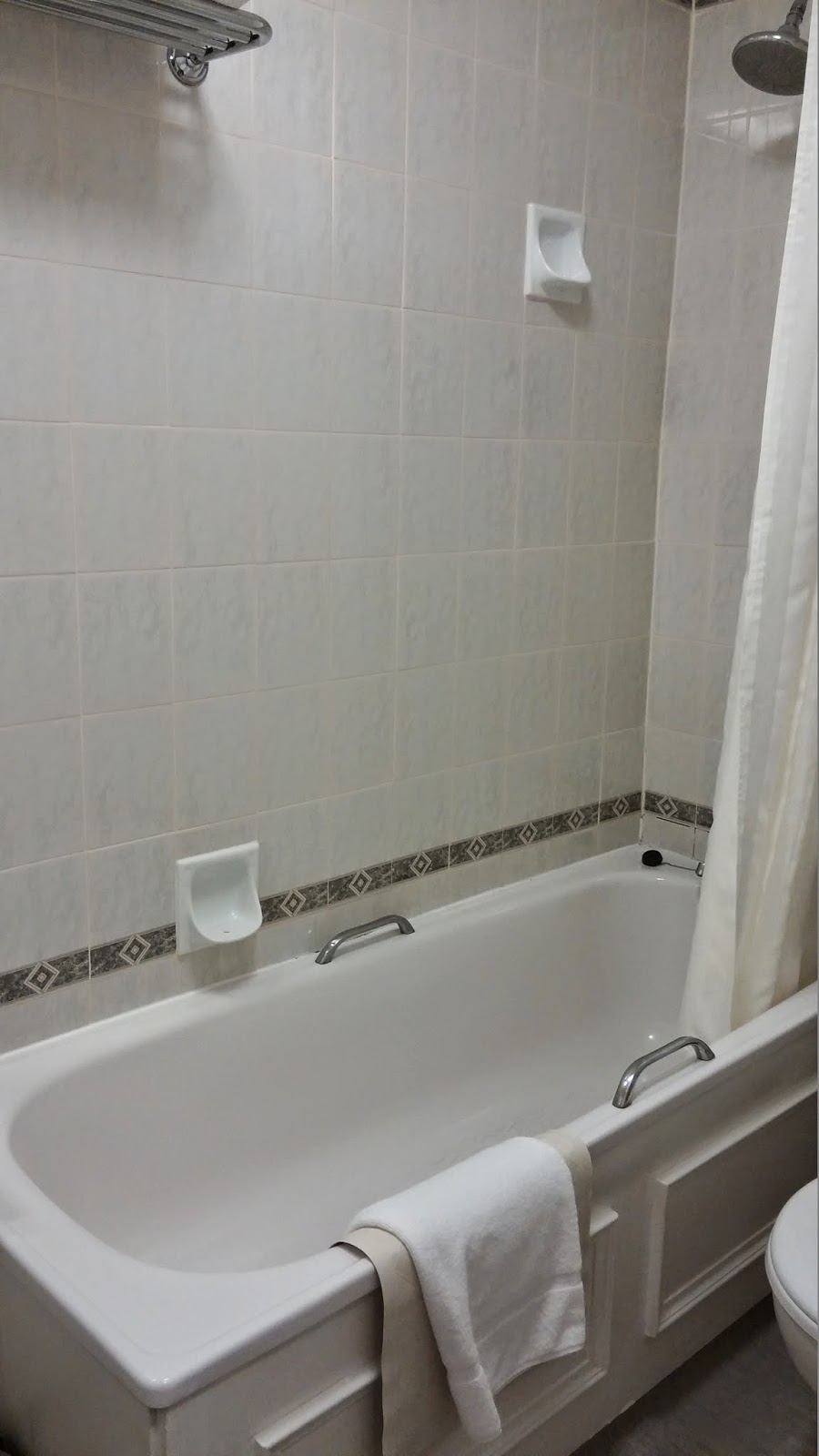 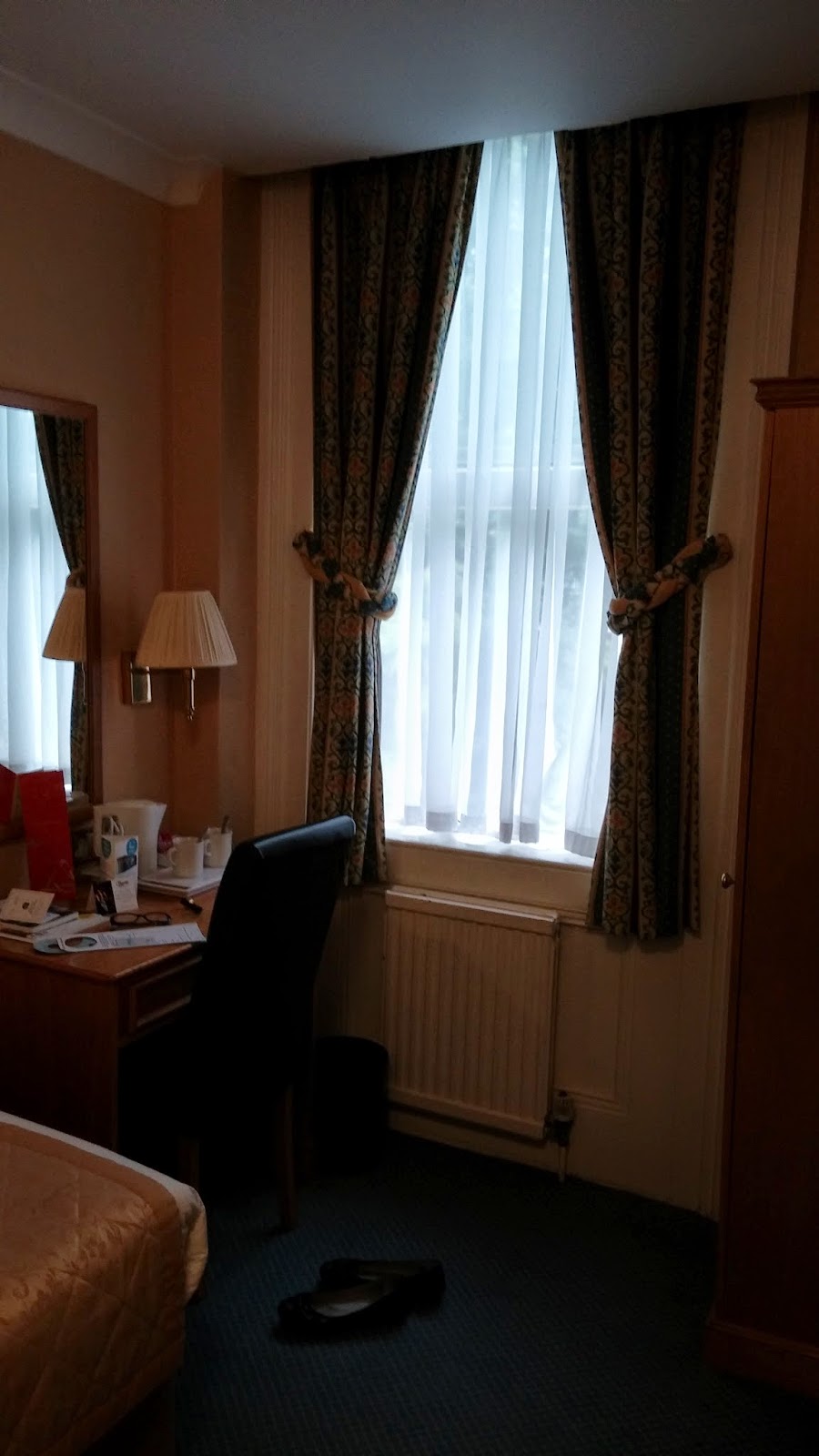 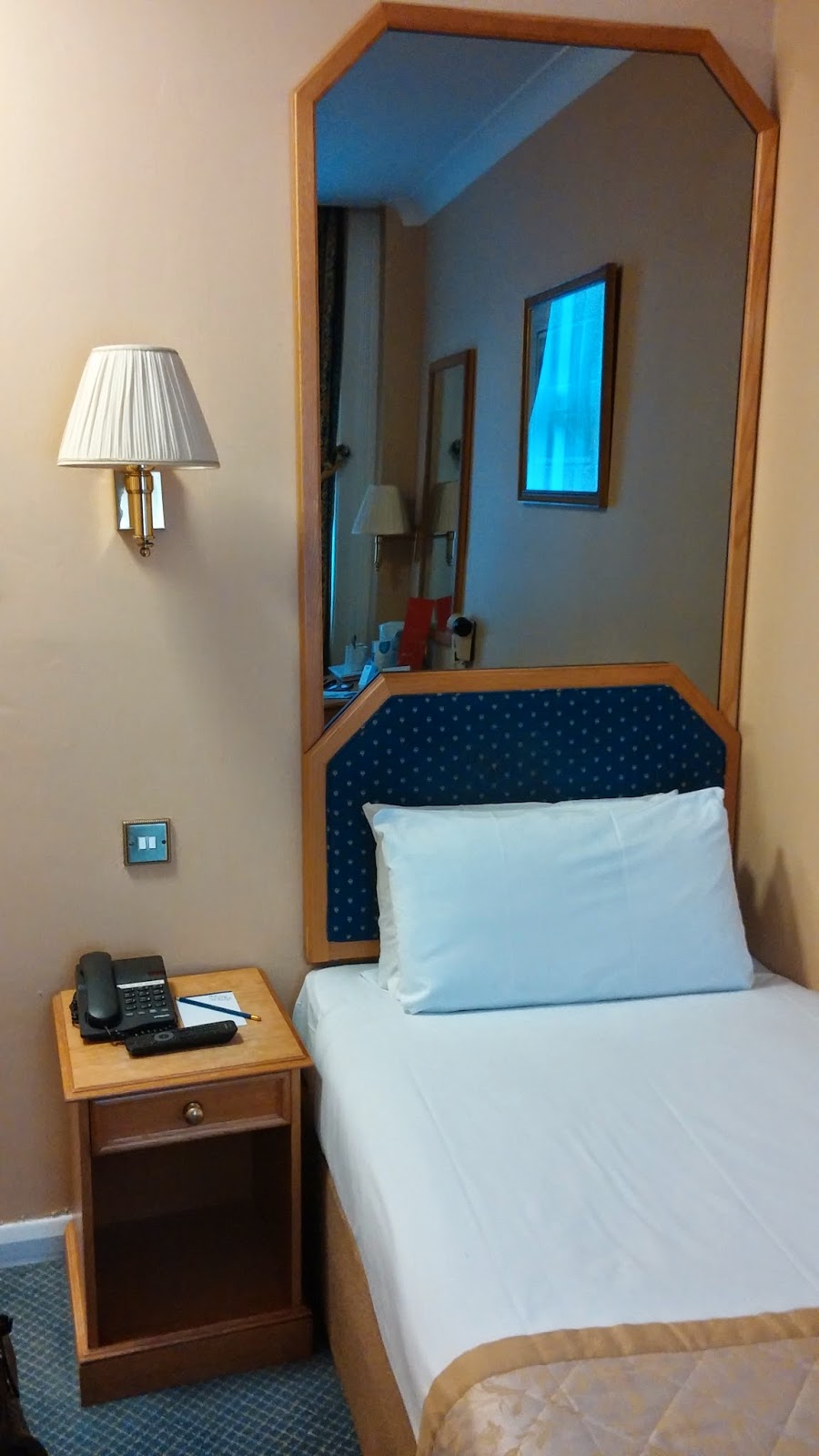 And the view was lovely. 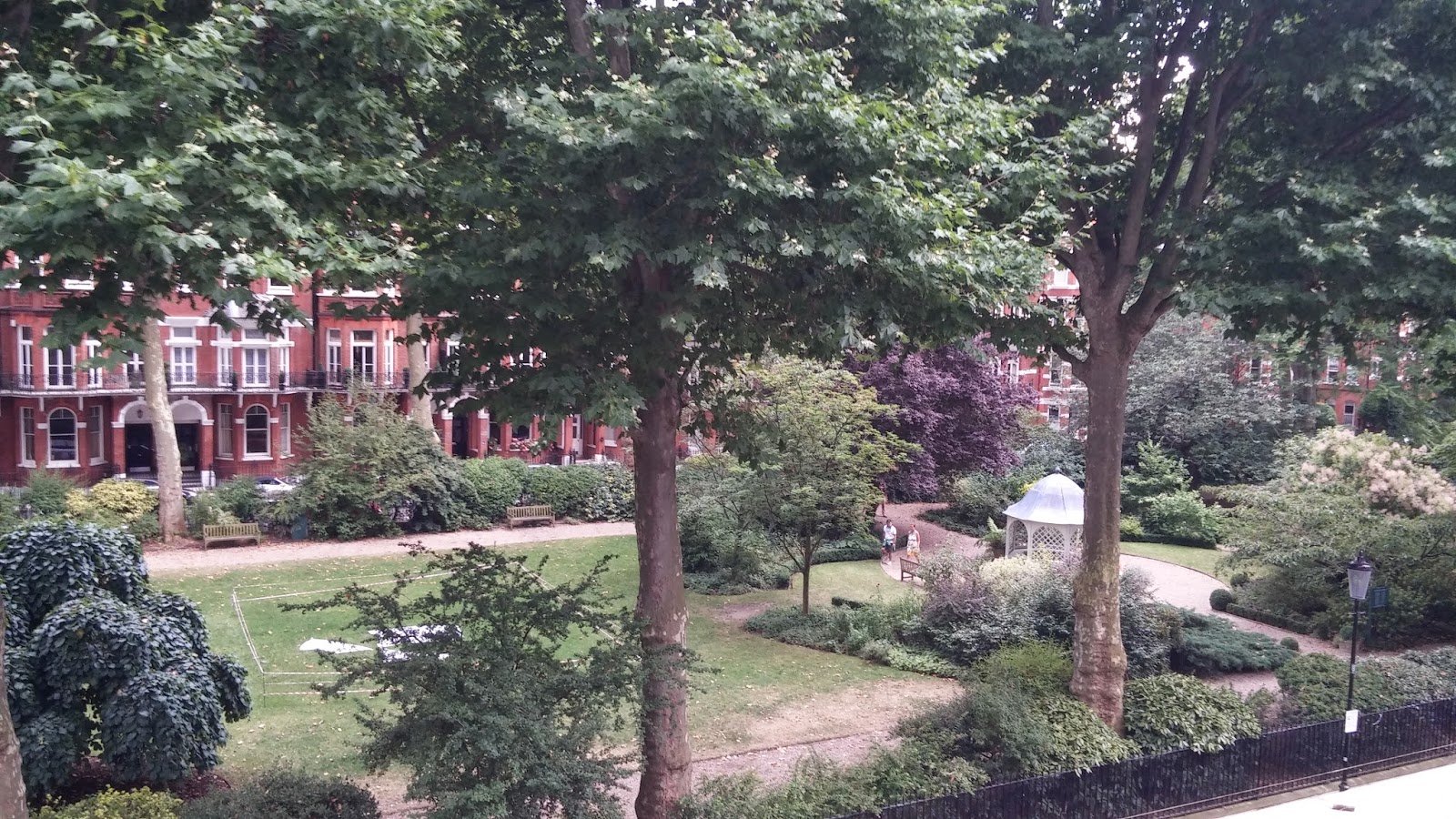 I brewed myself a little packet of instant coffee, and all started to be right in the world. 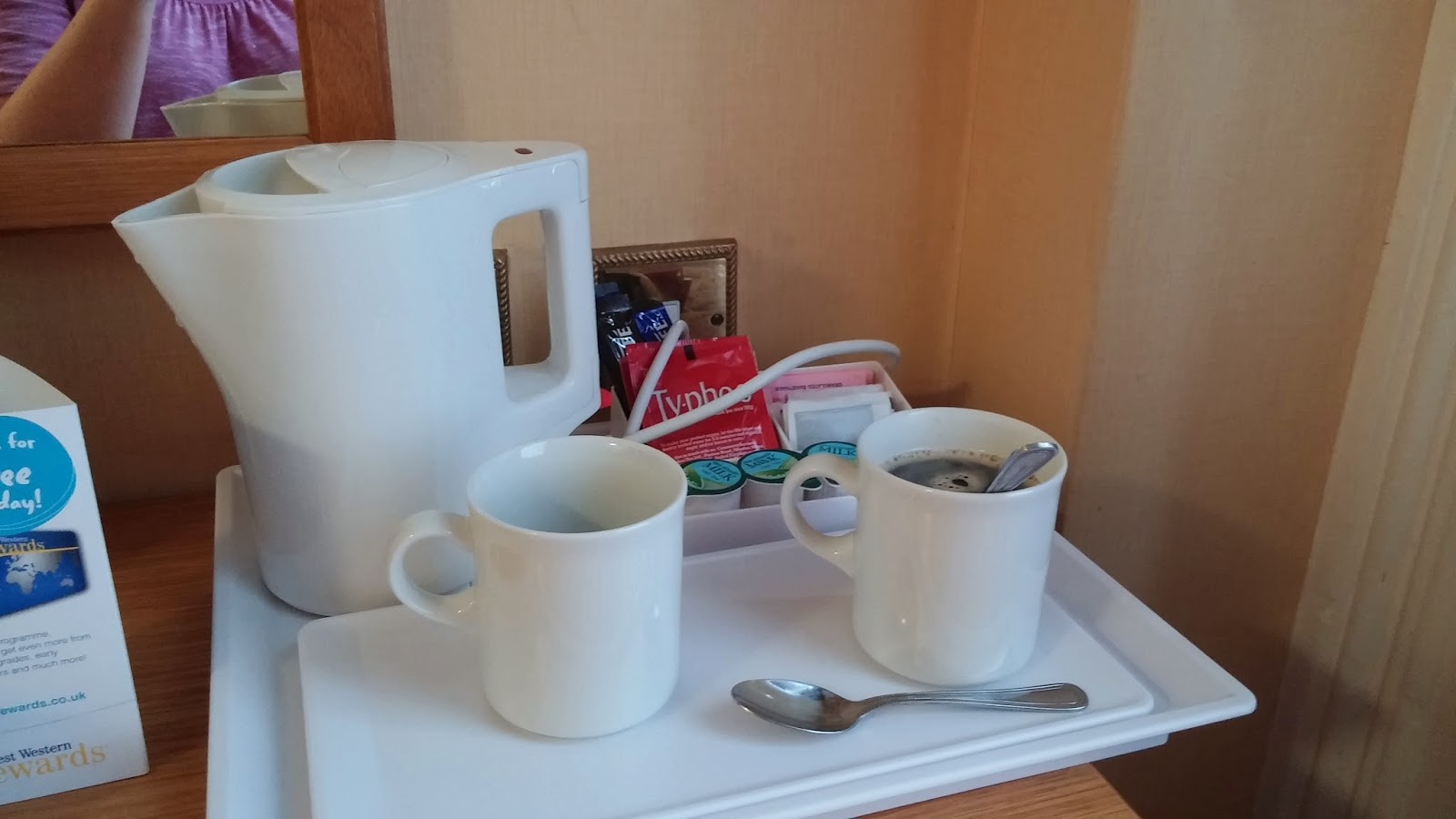 The shower and all its water pressure was glorious.  I napped a bit.  I watched new Top Gear episodes.  I walked down to grab some take away dinner, but everything closed at 6pm and it was 6:03 pm.  I ended up in this chain sandwich shop called Greggs with some of the most delicious looking pastries I've ever seen. 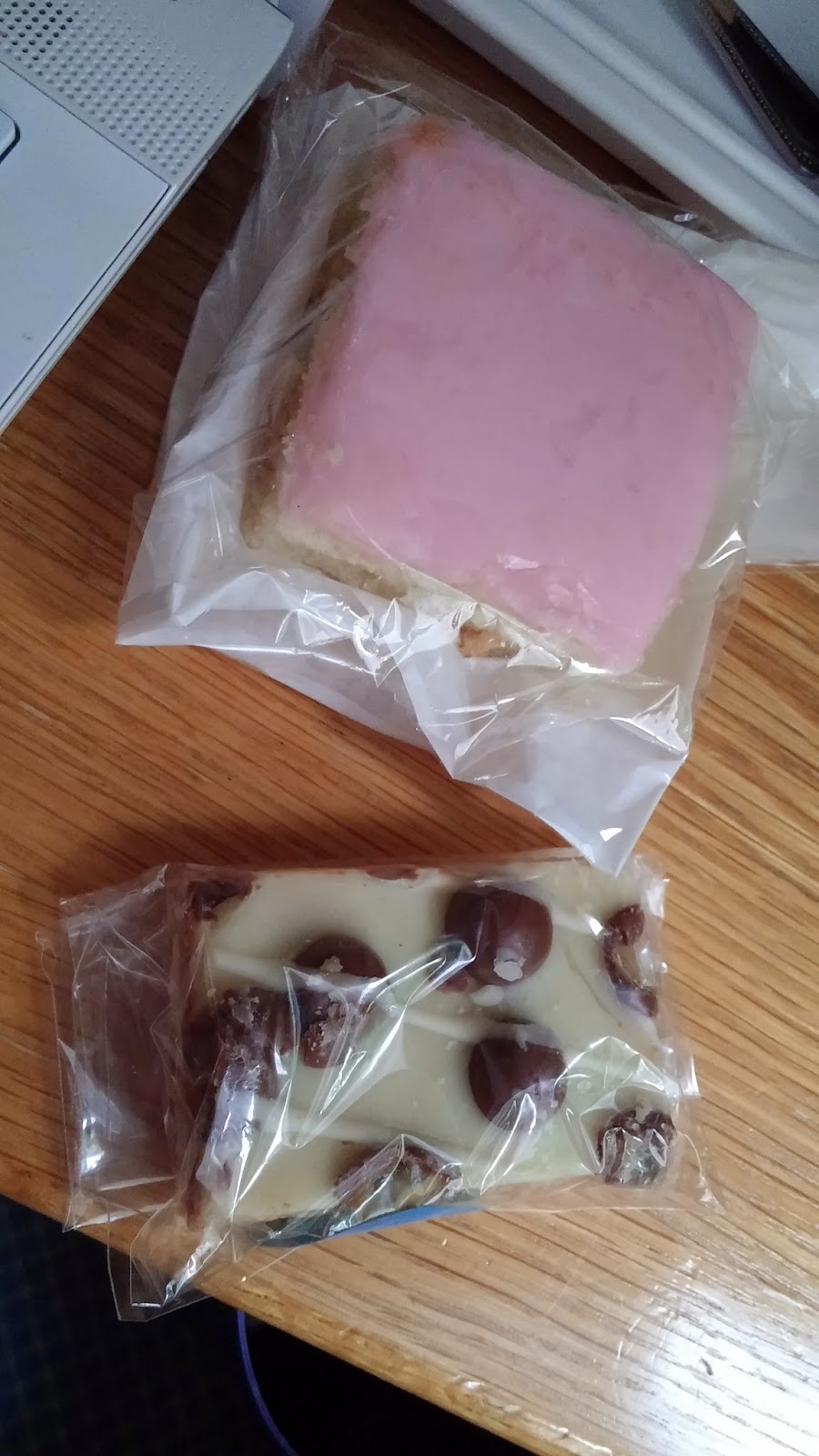 (the one with the dots was a shortbread cookie with maple-esque frosting and chocolate covered toffee balls.  The pink one was sugar cake iced with sugar.)

I sat in my little room watching British quiz shoes and trying to stay cool.  Watched some families play ping-pong in the park across the square.  Oh, the sleep thing really didn't happen, between the sweating and the trash collection.  But there was a moment around 2AM as a great wind came through and rustled the leaves on the giant trees outside the window. 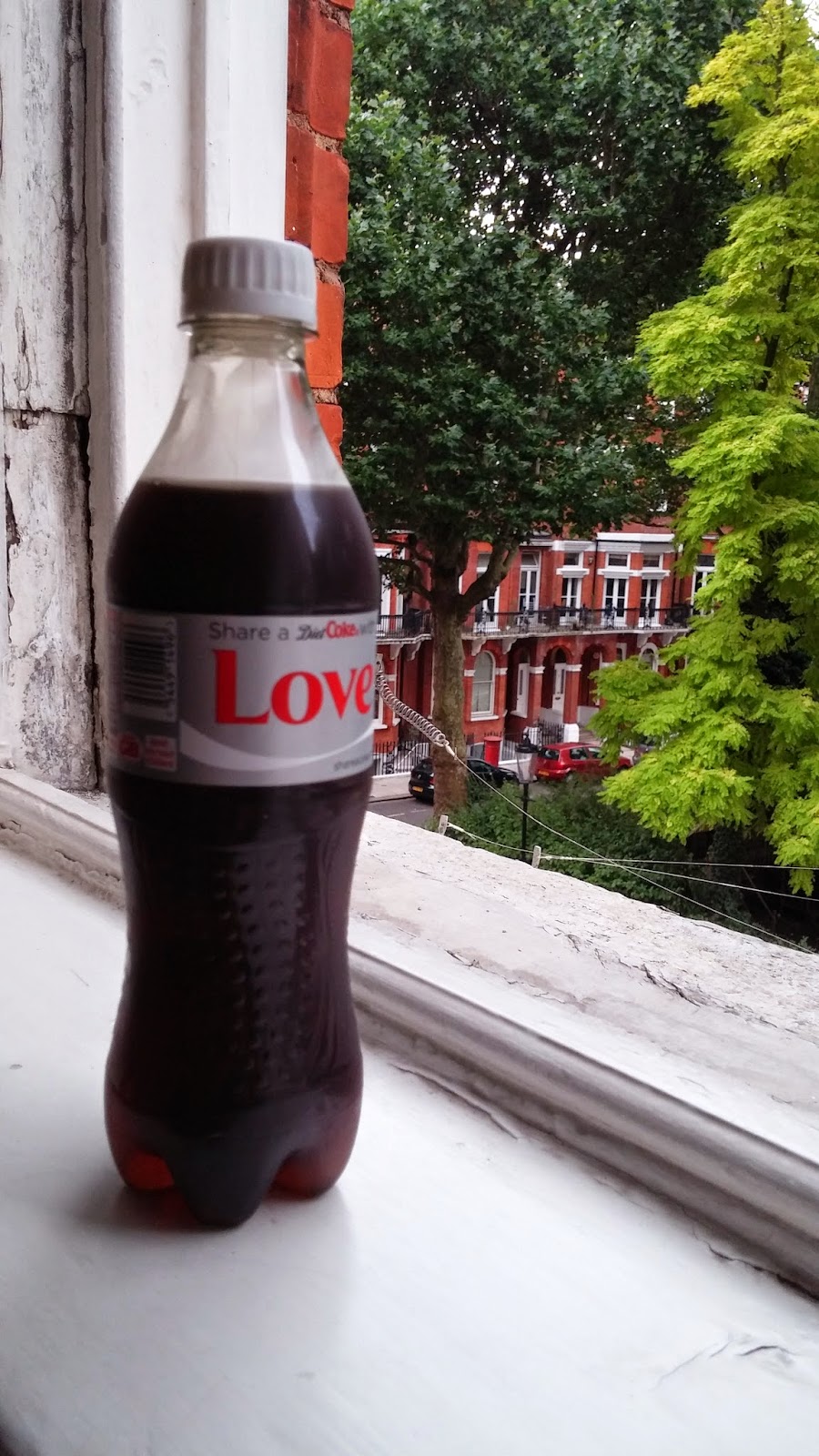 Today, we start the adventure...

P.S.  There is an old saying, "Pennies from heaven."  A friend told me that when someone you love has passed away, sometimes they will reach out by leaving pennies for you.  I know... I know... but for whatever reason, after my grandma passed, we started finding pennies in the strangest spots, at moments when we were thinking of her.  As I was in the airport getting ready to depart for this trip, I heard a "cling!" and felt something under my foot.  Mind you, there was no one around me.  I had cleared out all my change from my purse before I left.  But I lifted my foot and there was a penny.  I guess Grandma decided to come along for the ride. 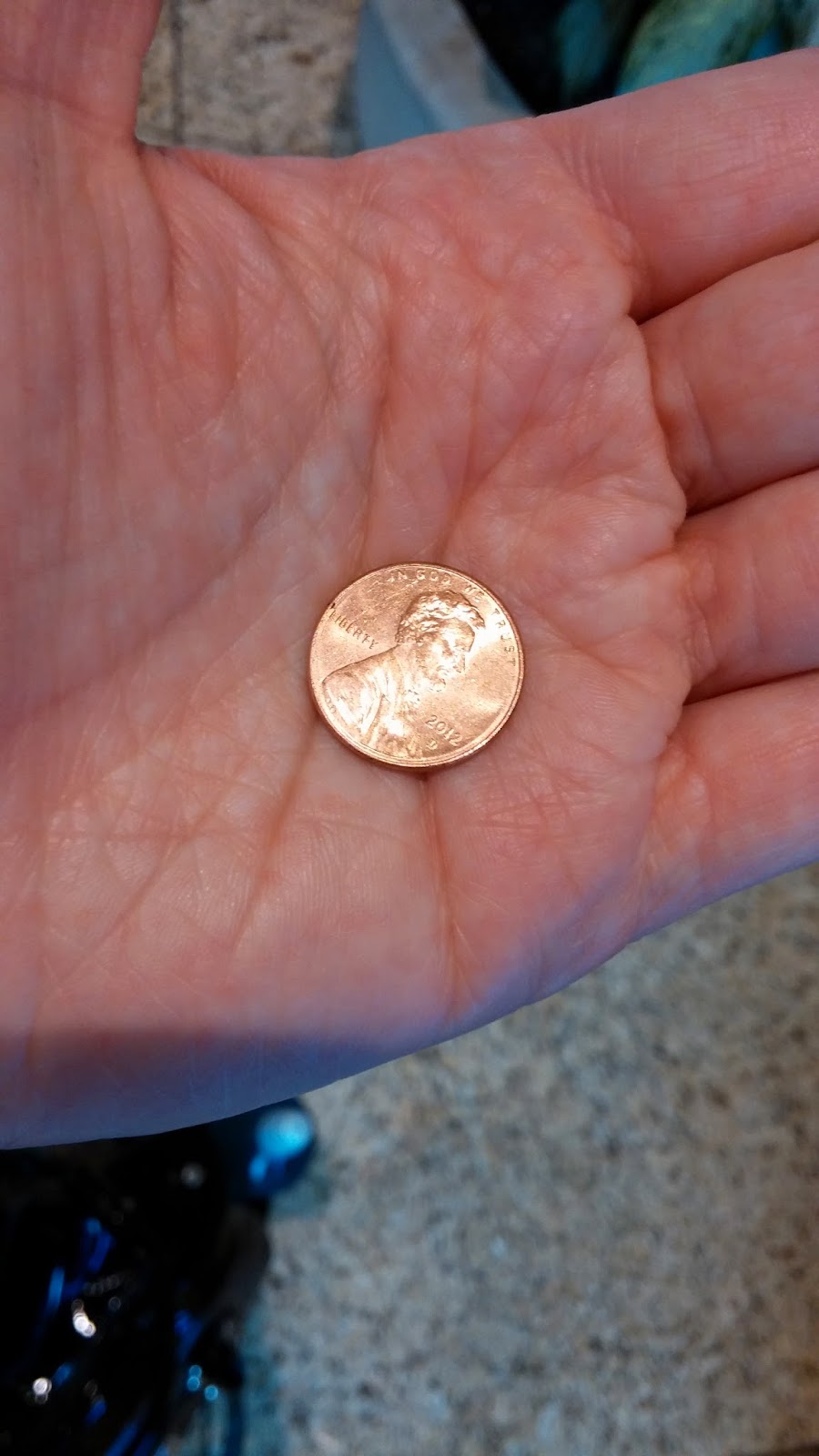