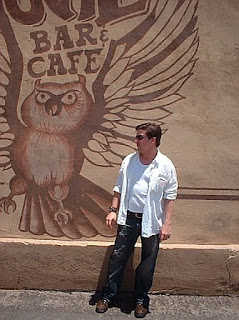 Happy September, loyal readers!  Today marks the start of a really fun new blog exchange.  As you know, I am a proud author with 47North and once a month I'll be interviewing other 47North authors for your reading pleasure.  This month, I'm host to Jason Sheehan, brain father of A Private Little War.

Why did you write A Private Little War?
I wish I had some great answer to this—like because I wanted to make the world a better place or because I was instructed to by the flowers on my wallpaper. But the true answer is simply that I couldn’t stop. I probably start ten times as many stories as I finish. Sometimes they last a paragraph. Sometimes they last a hundred pages. Some never make it past a fragment of a line. But every now and then I get into one that I just can’t let go of, and A Private Little War was one of those.

What is it about this project that makes you happy or proud?
That I wrote exactly the story I wanted to write. The decisions I made during its construction—from choosing to write about such broken and often loathsome human beings to an authorial insistence that even the worst men deserve to have their stories told to the story’s crashing, bloody and, ultimately, unavoidable ending—might not have been wise or, you know, marketable, but they were mine. I’m sure that more people might like the book if I’d thrown in a few pretty vampires or car chases, but I’m proud that I stuck by my guns and happy that a fair number of people seem to be appreciating a war story that’s not all gung-ho and shiny.

On a lighter and less author-y note, the story has biplanes in it. And because I’m a total geek for weird hi-tech/lo-tech mash-ups, I’m insanely proud of the fact that I managed to write a story that has biplanes and spaceships existing side-by-side in a rational and not-completely-bonkers universe.

What was one of the first books to inspire your interest in this genre?
It wasn’t one book, but all science fiction books written from about 1960 through 1989. My father was a huge science fiction fan. He read just about anything that had spaceships or ray guns or big, slobbery aliens on the cover and always had a big stack of paperbacks on his nightstand that I spent most of my formative years raiding. Through him, I was exposed to some of the best and all of the worst scifi ever written, and every single one of them had something to do with me eventually becoming the writer I am.

Who influenced your voice as a writer?
Oh, man… There were so many. But in no particular order, I’ll say Hunter Thompson for the wildness. Faulkner for the richness. Hemingway for the terseness of a plain-spoken thought. William Gibson for the poetry of colliding histories. And Hubert Selby Jr. for finding the beauty in ugly things. Michael Herr taught me to tell the truth even when I’m making things up. And Ray Bradbury told me it was okay to sometimes just write stories about dinosaurs.

How did you learn how to write? How did you develop your style?
I thought I knew how to write when I was doing it as a hobby. I really learned how to write when I had to do it to pay the rent. So much of what I do now comes from the night after I talked my way into my first serious newspaper job—the moment when I had to sit down and actually write something that I knew people were going to be reading a few days later and the feeling of abject terror that this realization inspired in me.

What is your process when you begin a new project?
Just write, baby. Just sit down and do it and hope like hell that it’s going somewhere useful or interesting. The beginnings of things are my favorite parts—the point at which the stakes are lowest and the potential for awesomeness most untarnished.

What are some writing tips or tricks that work for you?
I dunno. Does drinking count as a trick?
Oh, and also: Edit as you go. I read somewhere once that William Gibson edits the entire novel every day. Every time he sits down to add some fresh words, he first goes back and edits everything that he’s already done. Now that is just plain batshit crazy, but I am a big proponent of backing up a few pages every day and taking a fresh look at the ground most recently covered. It gives me a bit of a running start, and most days I need that.

What is one of the happiest moments in your writing career?
When Hugh Howey, author of the Wool series, bonafide super-genius DIY author person and one of my favorite modern scifi writers, wrote that he liked A Private Little War. He said, among other things, “You'll want to wear boots and a flak jacket when you read this book. It's everything I love about hard science fiction and war stories, all wrapped up in one.”

And no, I didn’t even have to look that up. I’ve memorized it, and have seriously considered getting it tattooed on my chest. Or maybe taking my agent out, getting him drunk and making him tattoo it on his chest, which might be a lot funnier the next morning.

What advice do you have for people who want to become writers?
Never listen to writers offering advice on writing. Except for maybe Chuck Wendig. Look him up and thank me later.

What upcoming projects are you working on?
I’m currently in the middle of a serialized novel for 47North called Tales From The Radiation Age which is just all full of giant robots and blimps and gooey biotechnology and spies and weirdness and dinosaurs—because when I said I learned that from Ray Bradbury, I wasn’t lying.

What is your favorite pen to write with?
A black, fine point Uniball or a plain blue Bic. I’ve always found the fancy pens too heavy or too…fraught.

Favorite beverage while writing?
Green tea and Bulleit bourbon. Not together, though.

Leather bound editions or paperbacks with a great pulp fiction covers?
Paperbacks. Books are meant to be read and loved and carried around and thrown in backpacks and loaned and borrowed and read again. They die a little when you put them on a shelf—which is the natural habitat of the leather bound edition.

Tell us about your favorite teacher and how he or she influenced you.
I had a teacher when I was maybe a sophomore in high school who saw me reading On The Road, took it away from me, gave me a copy of Last Exit To Brooklyn and told me not to tell my parents about it. I can’t remember his name, but I would like to buy that man a beer.

What is your favorite quote about writing?
“Fiction is a bridge to the truth that journalism can’t reach.” --Hunter Thompson.
Posted by Kate Danley at 4:39 AM