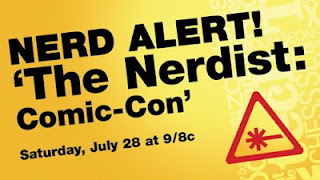 So sound the Super Awesome Alarm!  Screw the Olympics!  If you have BBC America, my buddy Ryan Winn (DC Inker - You know his work from the New 52 Batwing and Detective Comics) is the guest artist on The Nerdist  - Comic-Con Edition airing this Saturday.

I was there at the taping with the always adorable Giddy Girlie who kindly allowed me to tag along and pretend like I was part of the cool kids.  It was completely frickin' surreal.  I laughed so hard my face hurt.  I felt all warm and gushy the next day about the whole Nerdist crew because they were SO AWESOME.  And I laughed SO HARD. You know how when you play a game with a little kid and they laugh and laugh and laugh and then every time you see them, they want to play THAT EXACT SAME GAME and recreate THAT EXACT MOMENT every time you see them?  It's like that.  All I want to do is hang out at The Nerdist studio.  FOREVER.  Even being STUMBLING wiped out after nerdly overload at Comic-Con, those guys were firing on all cylinders.  Their brains are SO QUICK.  God, there was so much they aren't going to be able to show on national television... mostly involving Torchwood's Captain Jack and a sonic screwdriver remote control...