Today's interview leading up to the big Tax Day Free Fantasy giveaway is with author MeiLin Miranda. She'll be offering up Lovers and Beloveds for FREE on April 17th, which was named one of the "TOP SIX BEST INDIE NOVELS 2010" by the Fantasy Book Critic blog. Very fancy! So get to know the inside scoop on this prolific writer! Want more interviews? I'll be hosting another tomorrow.  Additionally, a bunch of the participating authors are running interviews, too! So check them out! 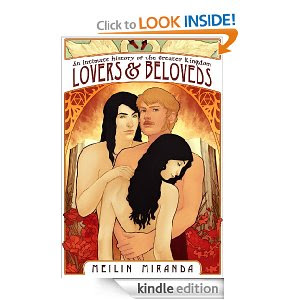 1. Tell us a little about Lovers and Beloveds. What’s it about? How did you get the idea?

The germ of the entire series is the story-in-story inside "Lovers and Beloveds." Warin and Emmae's story was a sort of serial daydream I had. I read Neil Gaiman's quote about–paraphrasing wildly here–writers just being the people who write their daydreams down and went, really? That's it? I'd been a professional nonfiction writer for 30-plus years but had been afraid to really try fiction. That did it.

As to what it's about: It's easier to talk about the series as a whole. "Lovers and Beloveds" is the first book in "An Intimate History of the Greater Kingdom"; I have no idea how many books are going to be in the series, but I'm thinking maybe four or five. The series explores politics, colonialism, gender, sexuality, religion and redemption, not necessarily in that order, and focuses on Prince Temmin of Tremont, who we meet in "Lovers and Beloveds" on the eve of his eighteenth birthday. He's unprepared for court's politics, assassins and sexual intrigues--and even more so, the King's immortal advisor Teacher, the holder of the royal family's hidden magic. Teacher becomes Temmin's tutor, his lessons contained in a magic book. Through it, Temmin experiences everything each story's characters do, and he's forced to confront serious mistakes in the kingdom's--and his own--past.

His present is no easier. He's falling for beautiful twins--brother and sister--who are the human hosts of the gods of love and desire called the Lovers. Being with them is more than sex; it's a religious calling. But an ancient prophecy says if Temmin heeds Their call it may spell the end of the monarchy, and the King fights him every step of the way.

Temmin must choose: Serve the Lovers and lose his father--and possibly the kingdom--or obey the King and risk the wrath of the Gods.


2. Who are your favorite authors in your genre and what do you adore about them?

I don't know if I have a genre, is the thing! I classify myself as epic fantasy, but the History doesn't have a medieval setting. It's Victorianesque, but it's not steampunk, either. The writers I adore are usually people who write about—or wrote in—the 19th century: Anthony Trollope, Jane Austen, Charles Dickens, Patrick O'Brian, Susanna Clarke, Georgette Heyer. What I love about them are the sprawling casts of characters, the strictures of class and etiquette, the richness of language modern writers are generally discouraged from using, and, quite frankly, the third person omniscient viewpoint! I like knowing what's going on in other heads than the Hero's, and that is very much out of fashion at present.


3. What is something cool you’ve done (not necessarily with writing, just in life)?

I always say the coolest I've ever been is tepid. :) Probably the most remarkable thing that has happened to me is that in 2006 I died in a cardiac arrest and was brought back to life. At the time I was pissed they brought me back; dying is horrible, but death itself is rather pleasant. But I have reconciled myself to this plane of existence. ;)

I've always written--I can't not write. It's a cliché for a reason. I switched from nonfiction to fiction after the events of 2006, when I realized I couldn't put it off any longer. I was afraid that what might come out would anger certain members of my family, but when I died I realized we really do have only so much time, and that at some point you have to be an adult and stop being afraid.


5. Do you have any writing rituals?

I probably should, but I really don't!


6. As a published author, what are some of the most valuable lessons you’ve learned?

Don't be afraid of what's inside you. Or if you are afraid, let it out anyway.


7. Do you have any upcoming projects in the works?

8. Any advice for newbie authors?

Write write write. Read read read. Really, that's all it comes down to. The rest is window dressing.


9. And just for fun, you’ve just won the MegaMillions lottery. $650M is yours. How do you spend it?

After the boring stuff like paying off bills and fixing up the house and setting up savings for the kids and retirement? Epic train trips with my family; a housekeeper; lots of Kickstarter backing; and helping other people get health care. As someone who's escaped medical bankruptcy by the skin of her teeth not once but twice, I'd do everything I could to change the health insurance situation in this country and help individuals trapped in the system of misery-for-profit as best I could.


Many thanks to MeiLin Miranda for giving us a little peek into the inner workings of her life!  I'll be posting a complete list of authors and their free Fantasy books on April 17th!  Come back tomorrow for another interview!
Posted by Kate Danley at 12:02 PM