A Christmas Carol Opens This Thursday!

I'll be taking a turn towards the darkly warm and fuzzy this Thursday in the GTC Production of A Christmas Carol. 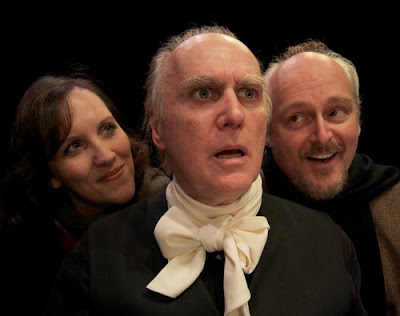 With a cast of three, we bring to life the original text as written by Charles Dickens himself. We bring it to spooky, spooky life. It is a ghost story, after all...

Did you know that? Yah. It is a ghost story. Says so on the front page of the original book. And we don't shy away from that.

I've done a bunch of shows over the course of my career, but every now and again, I get one that makes me go, "Wow. This is cool."

This is one of those shows.

The direction is brilliant. The set and lighting are breathtaking. The actors are insanely talented. And the text is yummy with a spoon.

Prior to this show, I was sort of O.V.E.R. A Christmas Carol. I had seen it so many times and done so badly, that I flat out never needed to see another version ever again.

This show has made a convert out of me. It is timely and challenging. There are social and political statements behind the text. And the text itself... It's like people forgot that it's not necessarily what you're saying, it's how you're saying it. Anyone can recap the plot of A Christmas Carol. But the words... Oh, the original words of Dickens are delicious. A couple spots in the script, I actually have trouble getting through because the words are so beautiful. I get choked up. True story. This emotional Grinch over here gets tears in her eyes.

So, come catch the holiday fun! Challenge your brain! Come out and see some theater in Los Angeles that doesn't suck!

A Christmas Carol
adapted from Charles Dickens
by Kevin Cochran