Our regular Celebrity Improv Mashup show has been preempted by a special presentation of AWESOME! 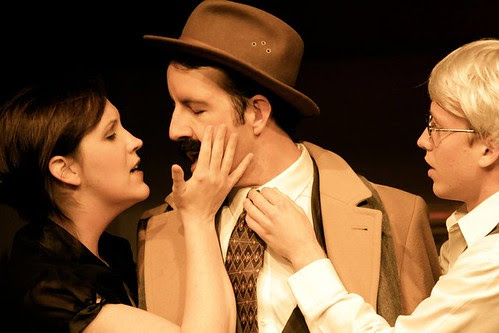 Murder by Acme is back for another tour de force! Okay, so just one show. And maybe another one in the coming months. 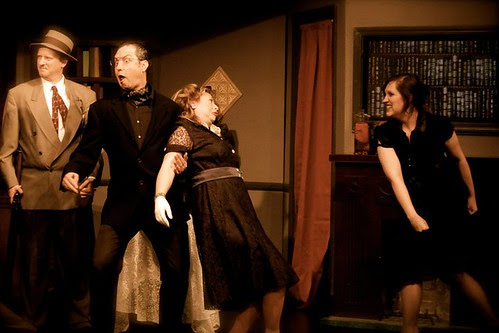 What is Muuuuurder by Acme you ask? 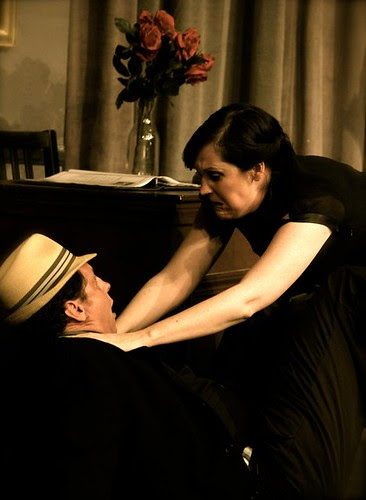 Oh, foolish mortals, it is a 45-minute, live, improvised, noir murder mystery. And this show just happens to feature a mess of actors from the Liquid Radio Players - an all improvised 40's-esque radio show. In other words, folks who actually know what they're doing, by jimminy! 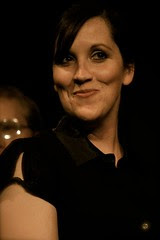 This show is always a HOOT and I can hardly wait to play! 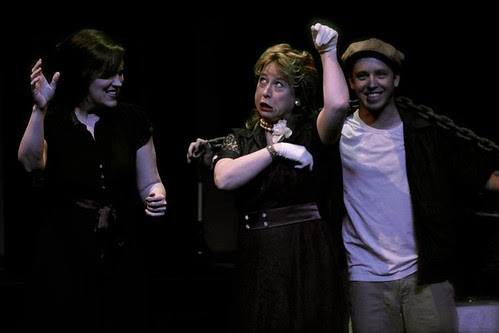 Friday, July 29th at 9:00PM
The Acme Comedy Theater
I know it isn't listed on their website... they have a Facebook thingie.

Wait. Here. You can buy tickets on LaughStub!

It's really happening. I'm not making it up. Just come. Don't make me punch you in the face! 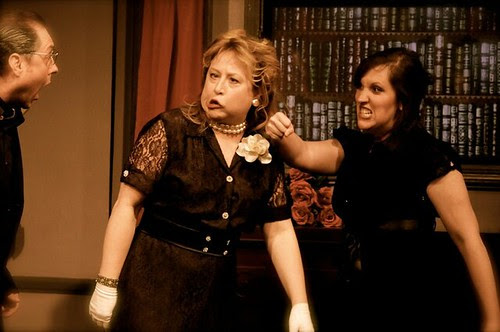 (Note: No actresses were actually punched in the face)
Posted by Kate Danley at 10:46 PM No comments:

Oh, it's funny how the tangled web of Hollywood works. I had a friend in Baltimore say that a friend of hers who writes for Backstage was looking for some long-timers here in Los Angeles to write about "How We Met People" in this crazy town of dreams.

There's nothing I love more than rambling on and on to the kids about how in my day I had to walk to auditions with printed 8x10 black and white lithographs and hand-typed resumes uphill both ways, so I said, "Sign me up!"

The article just came out and you can read it here:

http://www.backstage.com/bso/news-and-features-features/how-five-los-angeles-actors-met-people-in-1005295662.story
Posted by Kate Danley at 11:39 AM No comments:

So, I've been blogging for lo on 1.2 million years, blogging since the ancient days when the blog-o-sphere was a web that the spiders wouldn't index, bloggers got cease-and-desist letters from companies pissed that they were reviewing products and movies, and posts were un-Google-able.

It was the days before Google Reader and RSS feeds. The only way to find a blog was through a link on someone else's blog and the only way to drive traffic to your site was to leave a comment on someone's post.

It was the wild west.

And we were frontier folk - startled and delighted whenever we found a like minded individual's log cabin in the lonely cyber woods.

One such individual wrote a blog called Giddy Girlie. My real life friend, Miss Bliss, had met Giddy once at a blogger meetup in San Francisco and swore that she was cool.

Giddy's blog struck a chord with me and one day, when she posted her husband was going to be doing a lecture at a local library on making comic books, I thought, "What the heck..." So Miss Bliss and I drove south and I shyly introduced myself. We all went over to Rubio's for fish tacos afterwards.

I invited Mr. & Mrs. Giddy up to Los Angeles to see a show my buddy, Joseph Limbaugh, was producing called Overdroid where the audience drew pictures and then improvisers on stage would animate the drawings using video game controllers (and somewhere on the internet is the video from said show). I also invited my friend Adam-Adam to join us. 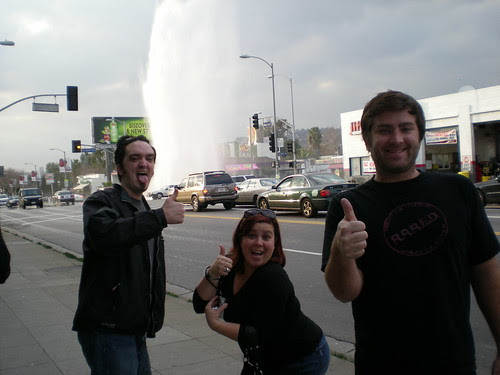 This is me at my very first comic book convention in 2008. 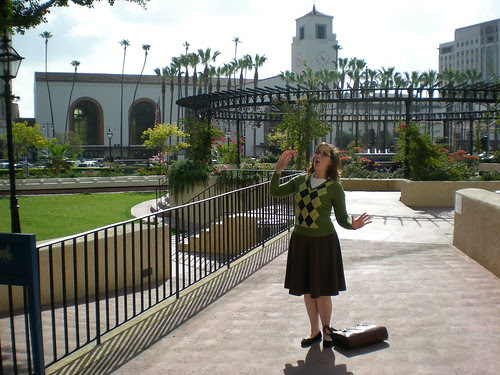 It was in Los Angeles. Mr. Giddy, a.k.a. Ryan Winn, had landed his first big gig inking The Darkness. 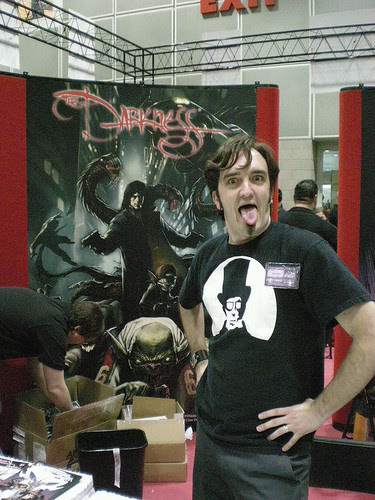 Also at this convention, he had been pulled into ink a special lithograph of The Freshman for Seth Green. 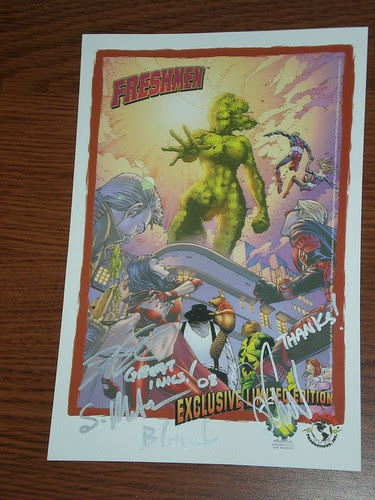 I was so star struck, I couldn't get any closer to the Seth Green table than to take this picture. 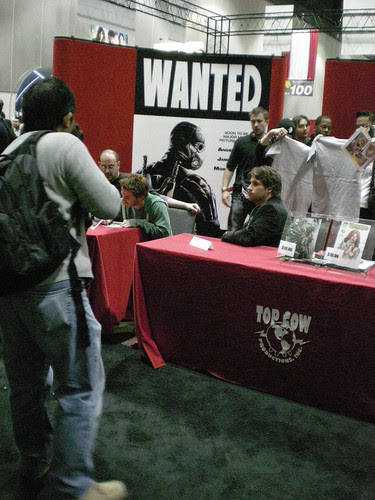 All Mr. Giddy kept saying, as my brain was exploding, was, "You think this Con is cool? Wait till you see San Diego!"

Here's a picture of Adam-Adam, Giddy Girlie, and Mr. Giddy after our very first comic convention together. 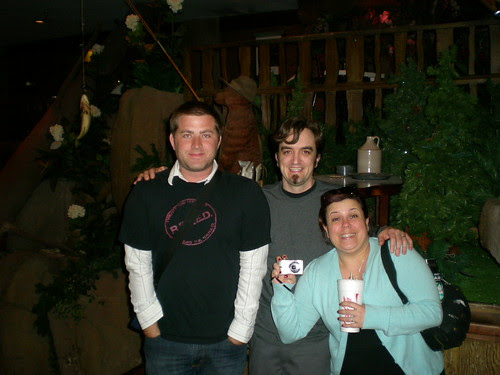 Look at how cute and young we are?

Sometimes, you meet an artist who works their butt off. They aren't off goofing around, riding along folks' coattails, depending upon "who you know" to get them where they want to go. They have integrity. They LOVE what they do. They work every. single. day on that art and when success in their chosen field starts to inch its way towards them, you go, "FINALLY! There IS justice in the world!"

That is Ryan Winn.

Who would have guess all those years ago that a ride in the Batmobile... 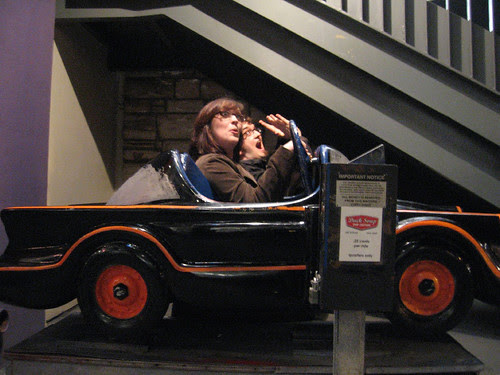 ...would end up being prophetic.

Mr. Ryan Winn, a.k.a. RAW for those of you looking at the artwork, is the official inker of Batman. 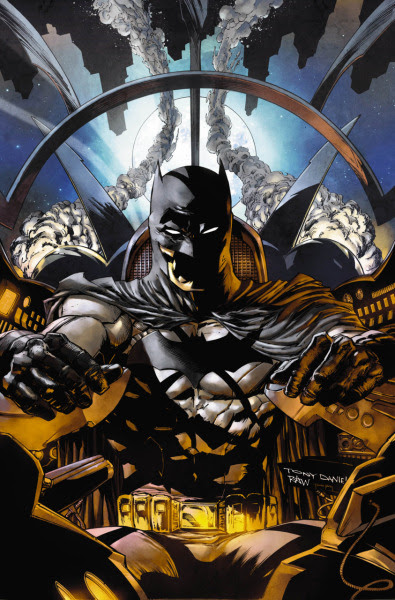 And three years after that dinky little convention in downtown Los Angeles, he'll be at the San Diego Comic Con. When he's not at DC Comics signing Bat-FUCKING-MAN comics, he'll be over in Artists Alley at table DD-11.

Official Site of The Playhouse

Howdy howdy howdy folks! So, as some of you may or may not know, I've been busy producing a new webseries called The Playhouse. We're halfway through the shoot and it is a scream. The creator, Richard Van Slyke, grew up on soap operas (if you've got some time, head over to YouTube and do a search for the 1950 soap opera Love of Life. It is FANTASTIC) and had the concept for a soap opera spoof.

The official blog for The Playhouse is up at http://theplayhousesoapopera.blogspot.com, so add us to your blogroll! To miss it would be scandalous! (did you see what I did there? did you?)
Posted by Kate Danley at 11:47 AM No comments:

This past January, I was invited to puppeteer for The Dread Crew of Oddwood's music video The Queen's Decree. Click here for some pictures from the shoot in Dana Point.

Well, the video has been released, and seriously, it is AMAZING! WARNING: Buckets o' fake bloody and grizzly puppet death. I am so proud to have been able to work on this project. Not only does it look great, these guys were the nicest group of pirates this gal has ever met!

Aarrrrr! It was a pleasure crossing swords!
Posted by Kate Danley at 10:25 PM No comments:

A Debt of Gratitude...

Isn't funny how things work out? I had finished up my latest book with great thanks to my beta readers at Adam Pictures and R. B. Wood, who took a manuscript I was D.O.N.E. with and took it to the next level with their gentle suggestions and enthusiasm.

I dropped a note to the absolutely fantastic copyeditor of The Woodcutter, Claire Paccha, but, unfortunately, her plate was full. I started searching through the KindleBoards for recommendations... when I stumbled upon a blog and a mom who needed some financial help to get her and her daughter out of an abusive situation.

An auction was being held and one of the items up for bid was editing services. It was something I was looking for and for a great cause, so I decided what the heck and dropped an opening bid.

I won and, seriously, it was like the heavens were pointing me to this place and moment. I just wanted to give a shout out to Ray Stilwell of Captains Blog who did the most AMAZING job. He had suggestions for smoothing out some logic problems that have been plaguing me, caught some ridiculously embarassing "Ooops!" glitches my eyes glossed over, and was all around awesome.

He had his own book come out recently, Mets Brand, so go pick up a copy!

And cross your fingers for me! Maggie for Hire (title still under consideration) begins her journey through the submission gauntlet today. 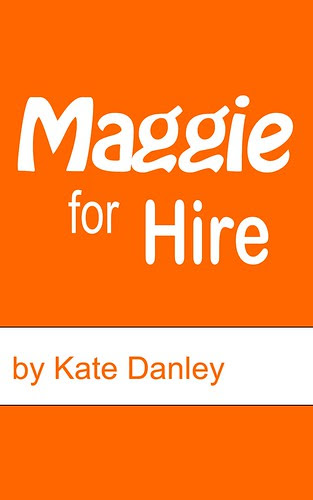 Well, Celebrity Improv Mashup is back in full swing and I haven't had time to blog about it AT. ALL. We're switching up the formula again and trying out some new technology, because nothing spells comedy gold like a bunch of old fogeys trying to figure out a green screen. Needless to say, looks like none of us will be moving on to a promising career in weather reporting. Darn you Doppler!

Stars Drew Seeley and Jillian Clare gratiously consented to being the guinna pigs as our mad scientists worked out the kinks of this show. All genius should be attributed to the huge talents of Drew and Jillian, who were absolutely fantastic despite the fact our ensemble is stumbling about trying to figure out what the heck we're doing. Ah, improv... we're totally making this up as we go along.

Here are pictures and video from the show:

Tomorrow, I get to chew the scenery and connive and plot as the villian in the brand new soap opera webseries The Playhouse. More details as we get stuff in the can, but I get to play with some of my favorite Acme people - including Diana Costa (whom you might remember as the crazy menopause lady in the Jack in the Box commercial), Carolyn Wilson (who has been on The Office and The Middle - but was also one of the casting associates on That 70's Show), Eli Chance (who played a fantastic Frankenstein) and Richard Van Slyke (who is a familiar face in LA's live theater scene).

Stay tuned for all the draaaama!
Posted by Kate Danley at 12:00 PM No comments: