That's sort of the summation of an email I received about a month ago from my buddy James Cutts, whom you might know from our Fall of Paul webseries. We had done some of my favorite sketches together at the Acme and his departure to the far reaches of Northern California (which is like, all the way up in the Bay area which I think is like, in Canada or something) was a sad, sad day indeed.

He and some other people (I'm looking at you Adam-Adam) had been asking about when I was going to get my butt in gear and take that next logical step for an out-of-work-actress-turned-author and read my gawddamned book into a frickin' mic and put out an an audio book, gosh darn it.

But, you know, things kept distracting me. You know. Important things like making sure I got caught up on all the 30 Rock episodes before my Hulu Plus membership expired.

But The Masses would not be deterred!

Like the Argentinian people, the public (all two of them) continued their relentless demand. And when faced with riots and revolt, who am I to not step out onto the balcony in my best Eva Peron ballgown? Besides, I really like ballgowns. Stick a tiara on me, and I can clean my house all day. What? Who cleans their house in a tiara? That would be crazy.

So I said to James, "Hellz yes I would do an audio book. Hellz to the yes."

A buddy of his, the super talented Marc Weibel, was wanting to branch out into audio books and it seemed a natural fit. And not natural like LA Beach Body Botox naturally fit. Natural natural fit.

I was flown up to the city, put up at a schwanky hotel, and arrived at the GORGEOUS Studio Trilogy (that rumor has it, a certain star, whose name is a synonym to Woman Goo Goo, was at just a few weeks earlier. See what you get when you read my blog? Name dropping AND word games. You're smart to stick around) and we started a three day recording odyssey in which I learned I have fat cheeks and my lips like to get caught on my teeth. 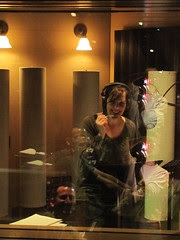 Gosh, there's a lot of things you learn about yourself when you read aloud for twenty hours. I recommend it to everyone! 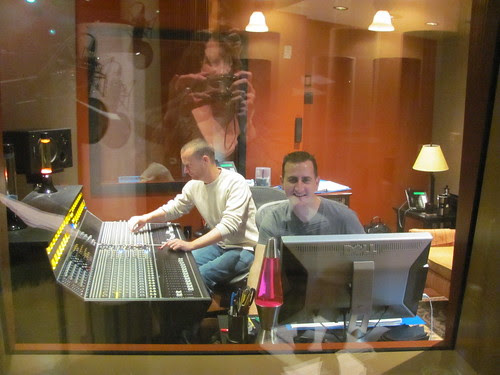 (This picture was totally staged. Don't let them fool you. Whenever they disappeared outside the view of my window, I'm pretty sure they were playing foosball and telling fart jokes)

The final printed version of The Woodcutter that I was reading from was ten pounds of paper. For real. TEN. POUNDS. OF. PAPER. 400 pages. And we did it. Start to finish.

I even got an evening to tool around.

I made a promise to my ten year old self that everytime I returned to San Francisco, I would visit The Palace of Fine Arts. 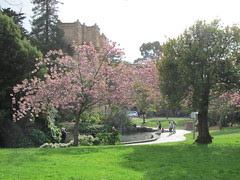 I managed to keep that promise one more time

I got down to Ghirardelli Square and bought myself a celebratory ice cream sundae. I didn't get a picture. Just imagine vanilla ice cream, chocolate covered strawberries and hot fudge. You're welcome.

I then strolled down past the cable car turn around and down to Fisherman's Wharf (which is delightful in the non-tourist season), where I grabbed some street calamari, and then promptly threw it away realizing now was probably not the time to play chicken with a game of food poisoning. It looked like really good FRIED SQUID though (I always get a giggle that folks call it calamari, all fancy like. FRIED SQUID! IT IS FRIED SQUID!)

I then stumbled upon the penny arcade. When I was a kid, this place was in the basement of The Cliff House. But now it's over at Fisherman's Wharf! 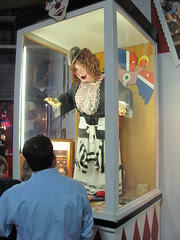 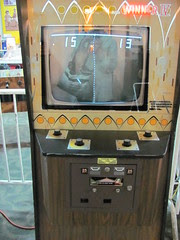 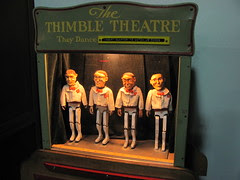 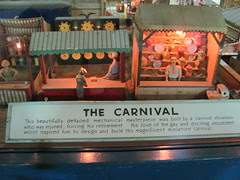 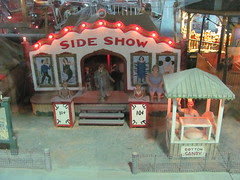 So, not to go saying I'm special (subtext: I'M MORE SPECIAL THAN ANYBODY!), but being a military brat and moving around so much, I wasn't around to watch the places from my childhood morph into something else and have the memories grow with the changes. Things are either Still There or Not Still There. End of story. So, it was really cool, after discovering this place was gone a few years back when I was at the Cliff House, to stumbling upon it in the darkness and walking in and seeing things just as they were when I was a kid. It was great to find something that was Still There.

So, anyhoogle. This post is longer than anyone cares about. I will shut up now. I promise. After a brief summary.

In summary, I found the San Francisco climate to be charming and the sights of the city enough to warm any chill brought about by the brief stints of fog...

Who is writing this?

The audio book is gonna be kickass. It should come out mid-to-late May. I'll keep you informed. In the meantime, tell your friends they can release that breath they were holding. IT HAS BEEN RECORDED! BREATHE AGAIN!
Posted by Kate Danley at 11:13 AM No comments:

The Acme is dark this week, so how about some videos from the vault?

Bryn Woznicki is this super talented director currently tearing things up over at CSUN. A lot of times, you agree to do a student project and you end up with something you're going to have to relegate to the "life experiences" file folder in your head.

But this? Bryn is amazing and I'm really proud to have been invited to be a part of it. Bonus! I got to act with my 1st improv teacher and current director Joseph Limbaugh, who is super cool and, in my opinion, knocks it out of the park.

Bryn was so fantastic about making us feel really comfortable on set and breaking things down for us into bite sized little emotional pieces. Because of my physical type, I usually play the wacky neighbor, not the romantic lead in things, so I got to do some stuff outside of my normal bag of tricks.

I, for one, welcome Bryn's eminent takeover of the entire entertainment industry. She's already on her way!

(As fair warning for the faint of heart (and any family members and that friend who was all, "But I know you. Ugnnhh."), right around 2:38 there's some steamy stuff. Let's avoid anyone having to gouge out their eyeballs.)
Posted by Kate Danley at 10:00 AM No comments: 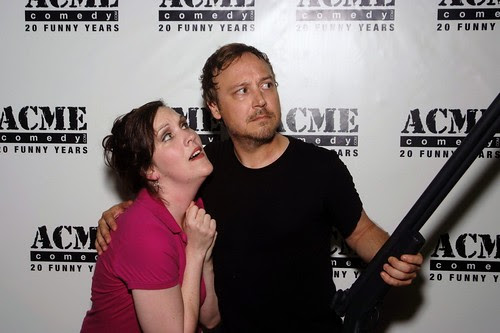 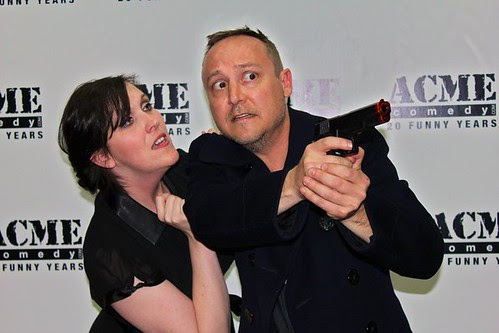 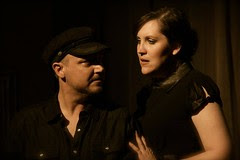 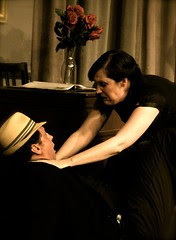 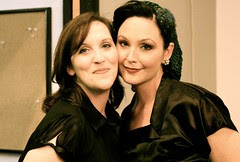 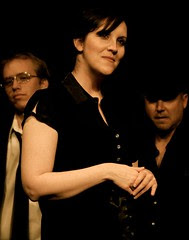 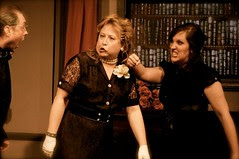 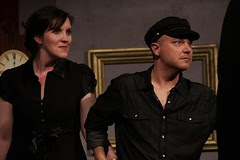 Howdy Howdy Howdy folks! This Friday, April 8th at 9:00PM Celebrity Improv Mashup is pleased to welcome Patrick Muldoon of "Starship Troopers" and Terri Ivens of "All My Children" to the Acme Stage. We had our workshop last night and these two owned it! Wear your best bobby socks and poodle skirts is all I'm sayin'. :) 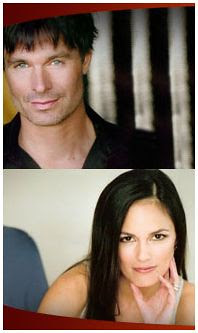 Then, for anyone who cares, we're going to be dark Easter weekend (4/22) to ensure we all have time to hit Target and stockpile our fallout shelters with enough Cadbury eggs to get us through the coming Apocolypse. May 21th, right? I should probably do laundry. It would be SO embarassing to be stuck in my granny underwear for all eternity.

Then the theater will be dark for all of May to make way for the LA Comedy Festival.

I guess what I'm trying to say is you've got three more chances to catch the show before we go on break. Plan accordingly.
Posted by Kate Danley at 10:38 AM No comments: 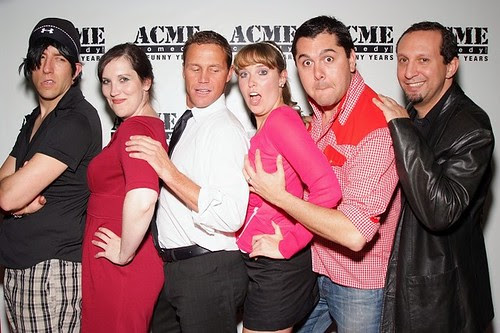 - Gotta say, I was pretty darn proud of this episode.
Posted by Kate Danley at 8:29 PM No comments:

Patrika Darbo and Me Rockin' Out 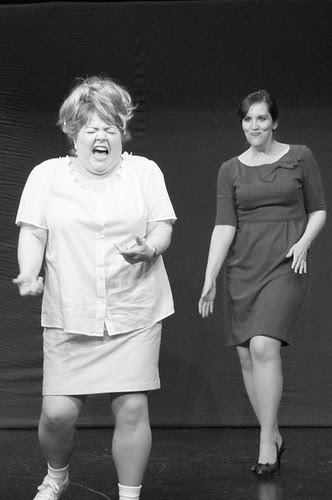 DSCF6105, originally uploaded by ACME Comedy by CharlesRileyPR.
Posted by Kate Danley at 3:03 PM No comments: 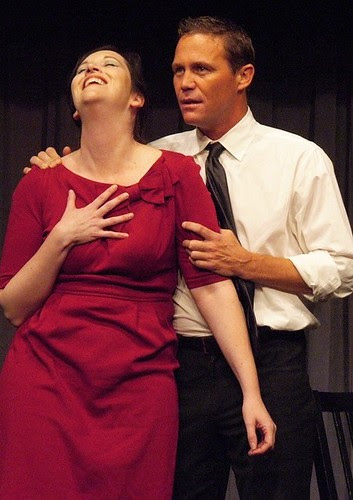 DSCF6317, originally uploaded by ACME Comedy by CharlesRileyPR.
Posted by Kate Danley at 3:03 PM No comments: