You know her. You love her. And guess who will be acting out her dream role this Friday night at 9:00PM? 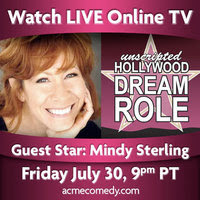 So, most of America probably knows her as Frau Farbissina from the Austin Powers franchise (SCOOOOOTTTT!!!) (please ignore me. It's one of those knee jerk call outs, like when someone says "Frau Blücher"), but if you're in the LA area, Mindy Sterling is a veteran of the stage and improv scene. I saw her in a show at the Celebration Theater that blew my frickin' mind and if you're lucky, you can catch one of her life altering comedy classes over at the Groundlings.

And now I get to share the stage with her. Knock me over with a feather, people.

Tickets are only $5 if you buy them online at www.acmecomedy.com! You can also watch the show Saturday at 9PM (PST) streaming live on the internet. And in case you've missed some past shows with your favorite celebrity, we've got 'em all up on http://www.youtube.com/hollywooddreamrole


What happens when a celebrity lands the role of a lifetime, but there’s no script, so the actors have to make it up as they go? Is it a Dream Role, or a Nightmare?

www.acmecomedy.com/#1 to watch live or for tickets

This is an Online TV Show, broadcast LIVE from our studio at The Famous ACME Comedy Theatre in Hollywood. To watch live online, go to www.acmecomedy.com/ and click "Live Broadcast"!

Be part of the studio audience and support Live Online TV!

Buy your tickets here:
www.acmecomedy.com/#1
Posted by Kate Danley at 11:43 AM