Guess who I get to act with this week? Walt Willey a.k.a. Jackson Montgomery on "All My Children". 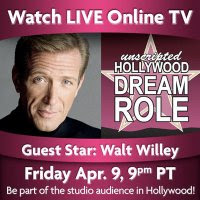 He came in and worked with us on Wednesday and, I have to say, he is seriously one of the nicest actors I ever worked with in Hollywood and a frickin' workhorse to boot. Came straight from shooting, showed up and rehearsed, then took the whole cast out for drinks. Super talented. Super nice. AND he's got a frickin' awesome dreamrole. You should totally come to the Acme Comedy Theatre tonight and see things unfold. 9:00PM. Hollywood Dream Role. $5 tickets if purchased online. Be there or be square.

THEN, as if that isn't awesome enough, I'll be making my grand debut in Theater Sports. Awwwwwyaaaaah. Improv comedy. Head to head action. 11:00PM till midnight. Come out and keep me awake. Here's hoping the midnight giggles hit in time for awesome to be birthed.
Posted by Kate Danley at 5:33 PM