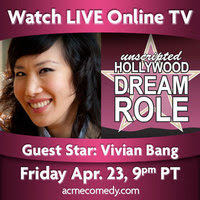 Guess who will be sitting in on this Friday's Hollywood Dreamrole show with Vivian Bang? Just goes to show a little well placed arsoni...I mean. Someone in the scheduled cast unexpectedly had to drop out and I was fortunate enough to be asked to step in. Which I humbly accepted. Please ignore the marching band and fireworks going on in the background. I have no idea who ordered those. *kicking a tuba under the desk and pushing the dancing elephant into the closet*

So, yah. I'm doing the show this Friday at 9:00PM. And it looks like I'll be taking in another movie that was on the list of "Everyone in the Entire World Has Seen This Movie Except Kate" list. Seriously. When you find out what the movie is, you might not speak to me any more. I mean, we talk so much, you and I. Our teasing comments tossed back and forth betwixt here and flickr feeds. But this might be the straw that breaks the camel's back. And now that you mention it, I don't know how that camel got into a tutu. *tries to push the camel into the closet, but it is full of elephant. Pushes it into the kitchen, instead, whilst trying to distract you with tap dancing.*

So, in addition to Hollywood Dreamrole and the world's attempt to educate this poor, deprived girl who obviously spent too much time as a kid playing paperdolls and not enough time absorbing popular culture, my Theater Sports team, The Demographics, must defend our crown at 11:00PM in Theatre Sports! 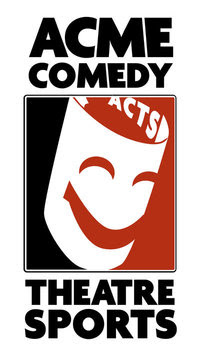 What is Theatre Sports? Here's the official blurb:

Two teams face off in an improv battle royale. Teams challenge each other to improv scenes, games and more! Three judges then decide their fate. Don't agree with the judges? Let them know! The winner of the competition returns next week to defend their crown!

Teams are made up of ACME performers as well as improvisors from all around town.

It's an all out fun war of comedic proportions.


http://www.acmecomedy.com/#5 for tickets
Posted by Kate Danley at 2:54 PM