Past couple days have been fun. I'm reading a book by Keith Johnstone called Impro. It's totally hippy dippy, but in that fantastic non-new age-y, overthrow the establishment, step out of line and think out of the box, WAKE UP WAKE UP WAKE UP sort of way.

For instance, he suggests drawing something and talks about people who believe they can't draw and how the idea that we can't draw is a symbol of The Man crushing our creative consciousnesses.

Now, I can't draw. There is nothing that comes out of my hand that I want to look at and/or subjugate anyone to gaze upon.

But the whole book is about going beyond the boundaries of "good" and "bad" and just effin' doing something for the sake of the experience, which is something I really need to get behind. Last week, I tried sitting down to Write Anything and the Muse was cockblocking me right and left.

So I got out my markers and drew a picture of a princess and a castle and a green dragon.

It was pretty darn horrible.

But then I wondered, "I wonder what it would be like to draw with my left hand?"

Turns out my left hand has a certain palsy charm to it. 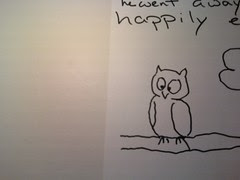 Now, I found out about this book because of an improv class I took a million years ago. The teacher had suggested it and I bought it and then promptly decided to read trashy vampire books for the next three years, instead.

I'm currently retaking the improv class because my brain don't work so good, though. I got knocked on the noggin last year and I'm slowly gaining back the IQ points I dropped. Brain damage, rusty performance skills, stiffled creativity... Who knows what was feeding the monster, but I was failing miserably at improv and sketch.

Sunday in class, though, I decided to actively fight the urge to be "clever" or "witty" or "smart". And it worked in a very juicy, soul satisfying way.

Last night, I had to pitch some sketches for Saturday's show (see: Acme 2 Nite) and, for the first time in a bit, I didn't come away wanting to bathe with toasters. In fact, I had a pretty darn tootin' good time.

So, young grasshopper, as the wise old kung fu masters have tried to impart upon us since the dawn of lip sync, there is not good or bad, just is. But what a glorious Is is that Is. And that's where I is today.
Posted by Kate Danley at 11:04 AM