Are you going to be in New York April 3?  Head on over to the Dramatists Guild that evening at 7:30 for a reading of my play Building Madness as part of the Friday Night Footlights program.  Admission is free!  And want to know more about the cast and creative team?  Check out BuildingMadness.com! 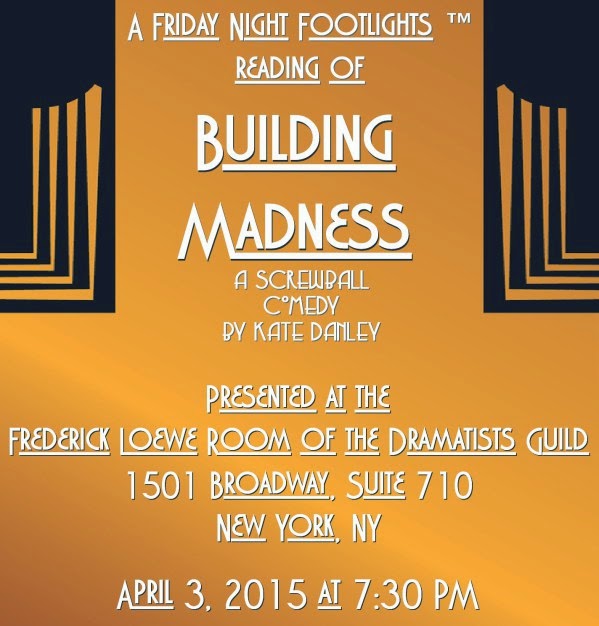 One of the best times I ever had was getting an after hours tour of Buckingham Palace.  They took down the velvet ropes for us, let us get close and personal with the furniture (that sounds dirty), and at the end of the night, I got to walk across the crunchy gravel of the courtyard and exit via the front door.  How cool is that?  So, when I saw there was an opportunity for a private tour of the Buckingham Palace gardens, I was On. It.

The day started with an early arrival at the palace.  This time, I was among the unwashed masses and my tour guide was nothing but an audio receiver held to my ear, but man... it was wonderful.  There is a painting in the front hallway by Feliks Topolski and it is one of the most incredible pieces of art I have ever laid eyes on.  I spent probably twenty minutes on this tour just sitting there staring at it.  The moment I thought I had seen all the wonders it had to reveal, something else would pop up and blow my mind. 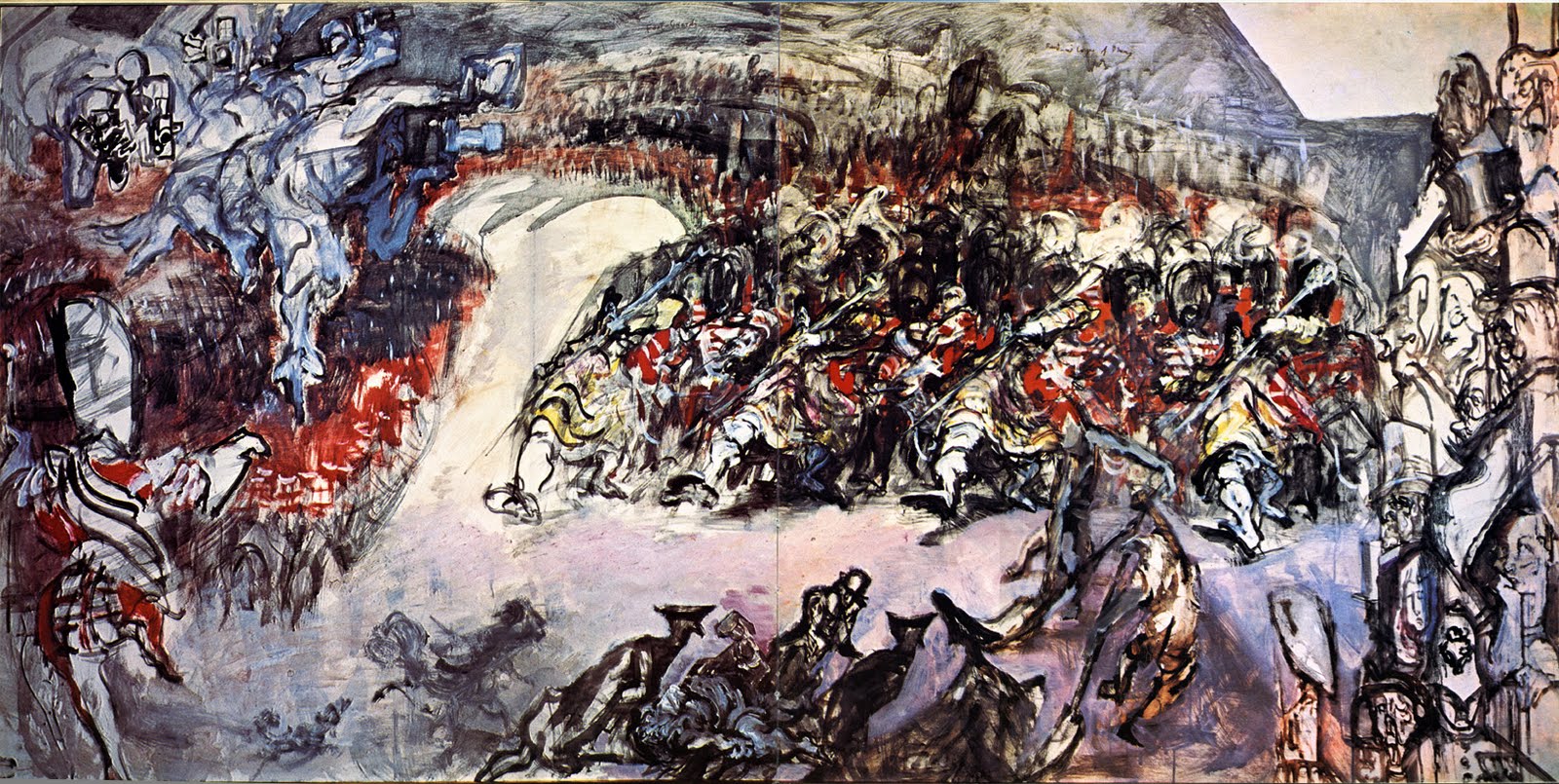 It is just such an amazing experience (and maybe it is just because I'm an American and we don't have these sorts of things) to walk into a living palace, where the art you're used to seeing as ancient history is fresh and new.  It's not some two-hundred year old cast off with worn gold-gilt and dusty crevasses.  As our guide mentioned on the earlier tour, "The queen lives here and we have to make sure it doesn't look shabby."  It is some of the most exquisite art I've seen and it is being taken care of.  The feeling I left with was less about a "royal family" and more about a familial custodianship of important cultural artifacts.  As I wandered through other "museum" palaces where people trampled the gardens right next to the "stay out of the planters" signs and used flash cameras to get pictures of 500-year-old oil paintings, it struck me how, as much as art and culture does and should belong to everyone, that sometimes having custodians who take a personal interest in preservation are the only reason why things survive.  It was one German general who stood up to Hitler and stopped the bombing of the Eiffel Tower and the Louvre.  As I watch ISIS destroy the ancient artifacts of Iraq, I wonder if there will be one person who has the bravery to stand against it.

ANYWAYS.  This is getting way too deep.

I finished my glorious tour of the palace and had a little time before my garden tour, so I stopped off at the palace cafe for some lunch on the Queen's back patio. 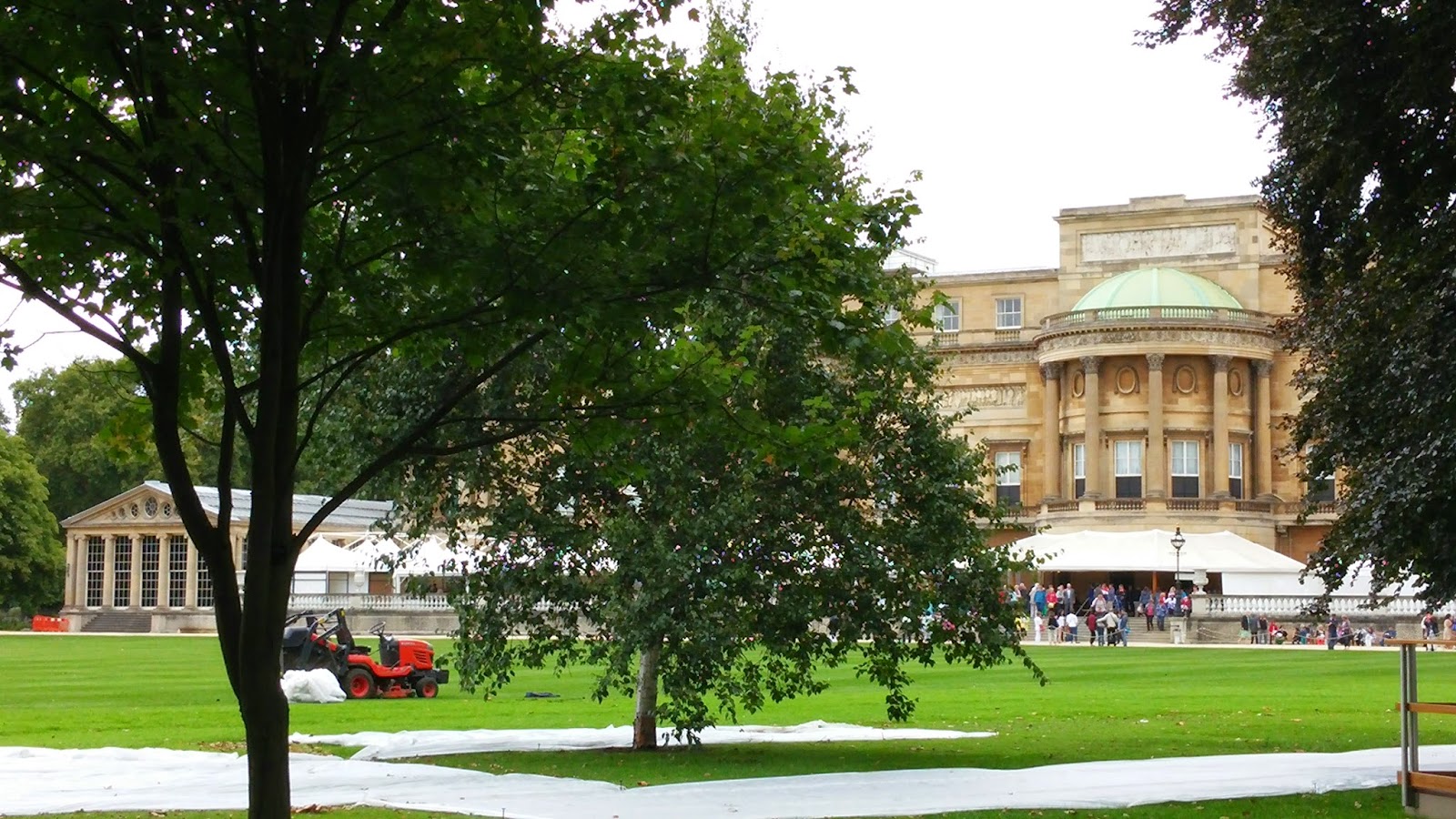 They had all sorts of delicious options to choose from.  I finally settled on a caprese sandwich, some cream puffs, and a cup of coffee. 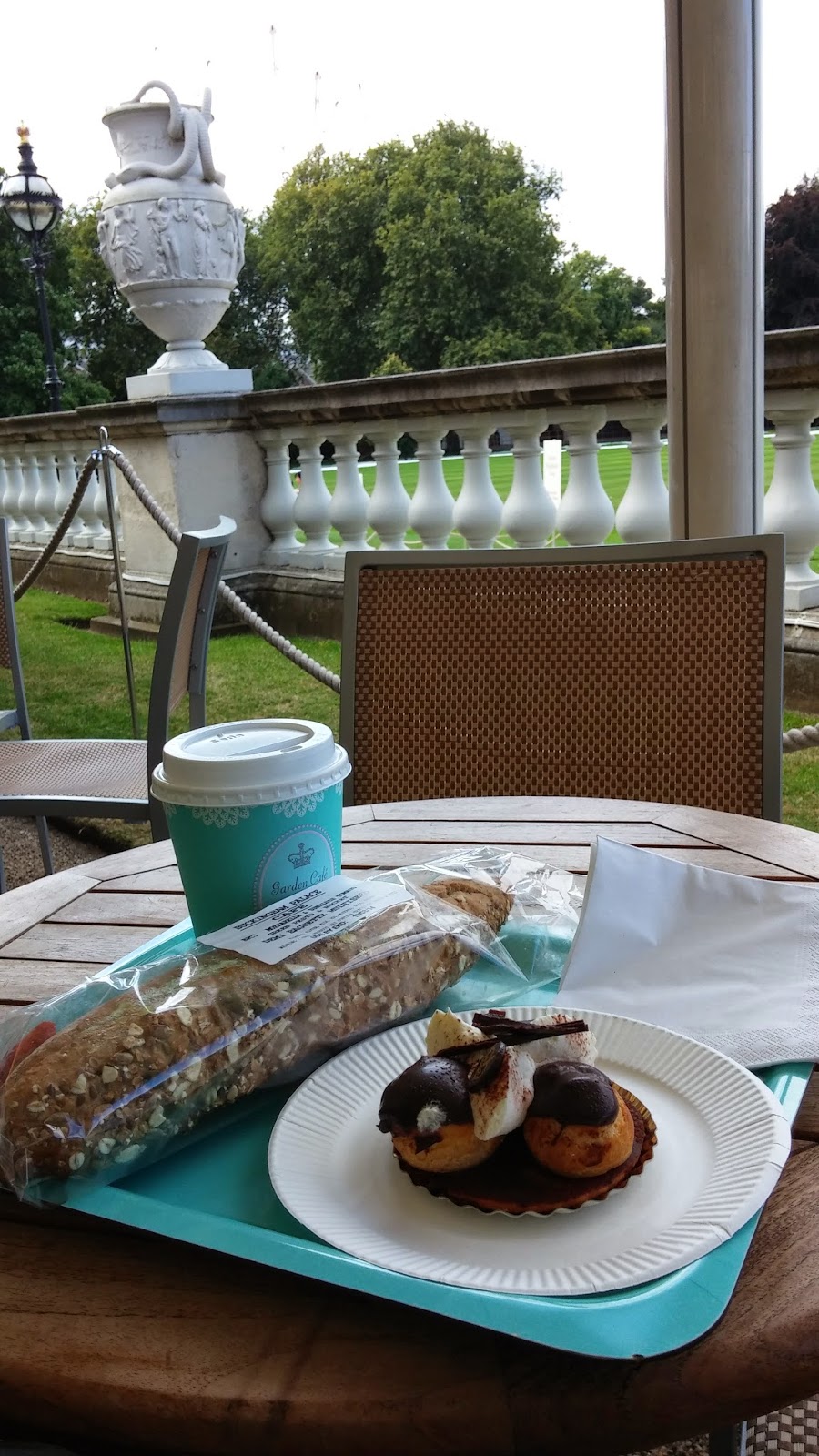 When it was finally time to take our turn around the gardens, we met in the far corner.  We weren't allowed to take any pictures, so bear with me.  Figure you've probably seen a rosebush, so you can probably imagine it fairly well.  We met up over by that white guardhouse. 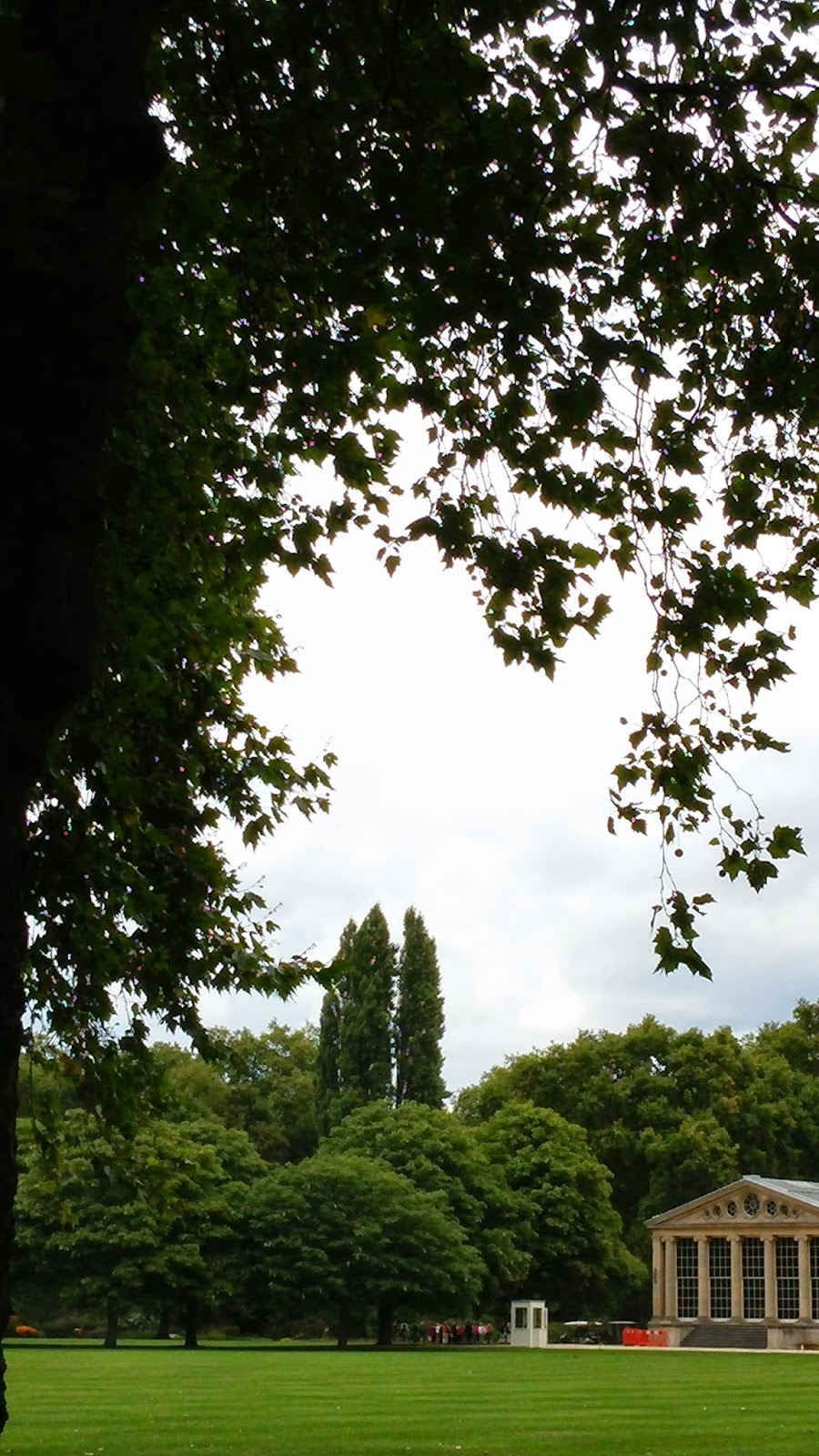 The first thing they mentioned were all the trees planted around the private gardens.  Queen Victoria started off the tradition, planting trees when her beloved Albert died, and the tradition was continued with each family member planting a tree.  But they serve a greater purpose now.  A bunch of high-rise apartments are being built in the area, touting views of Buckingham Palace's backyard.  Paparazzi were purchasing rooms to set up their telephoto cameras.  So, some trees were planted to give the family a little retreat from prying eyes.  Though traffic and buildings were just beyond the walls, this garden was an oasis.  There was a tennis court.  There was a rose garden (which featured this marble urn Napoleon had carved in preparation for his victory at Waterloo.  Oops.  It was too heavy to put indoors, so it sits amongst the roses.)  And in the middle of the gardens is a little island and this little island is a wildlife sanctuary.  It is home to several endangered bird species and gives the feathered fowl a little respite from city life. 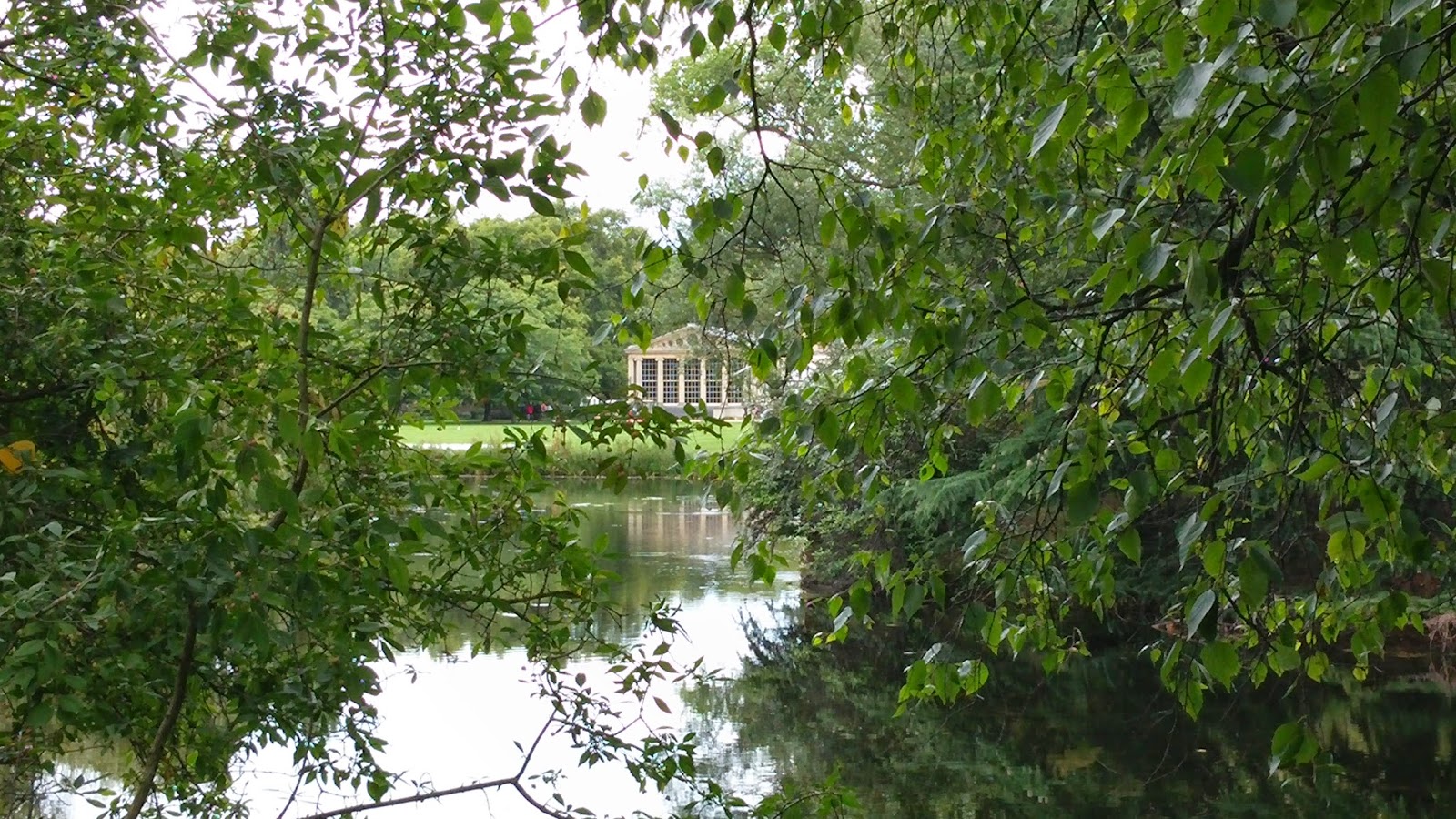 The family is devoted to green living and conservation and Prince Charles has introduced composting and recycling systems on property.

Here are just some random pictures I grabbed towards the end of the tour when we could pull our cameras out. 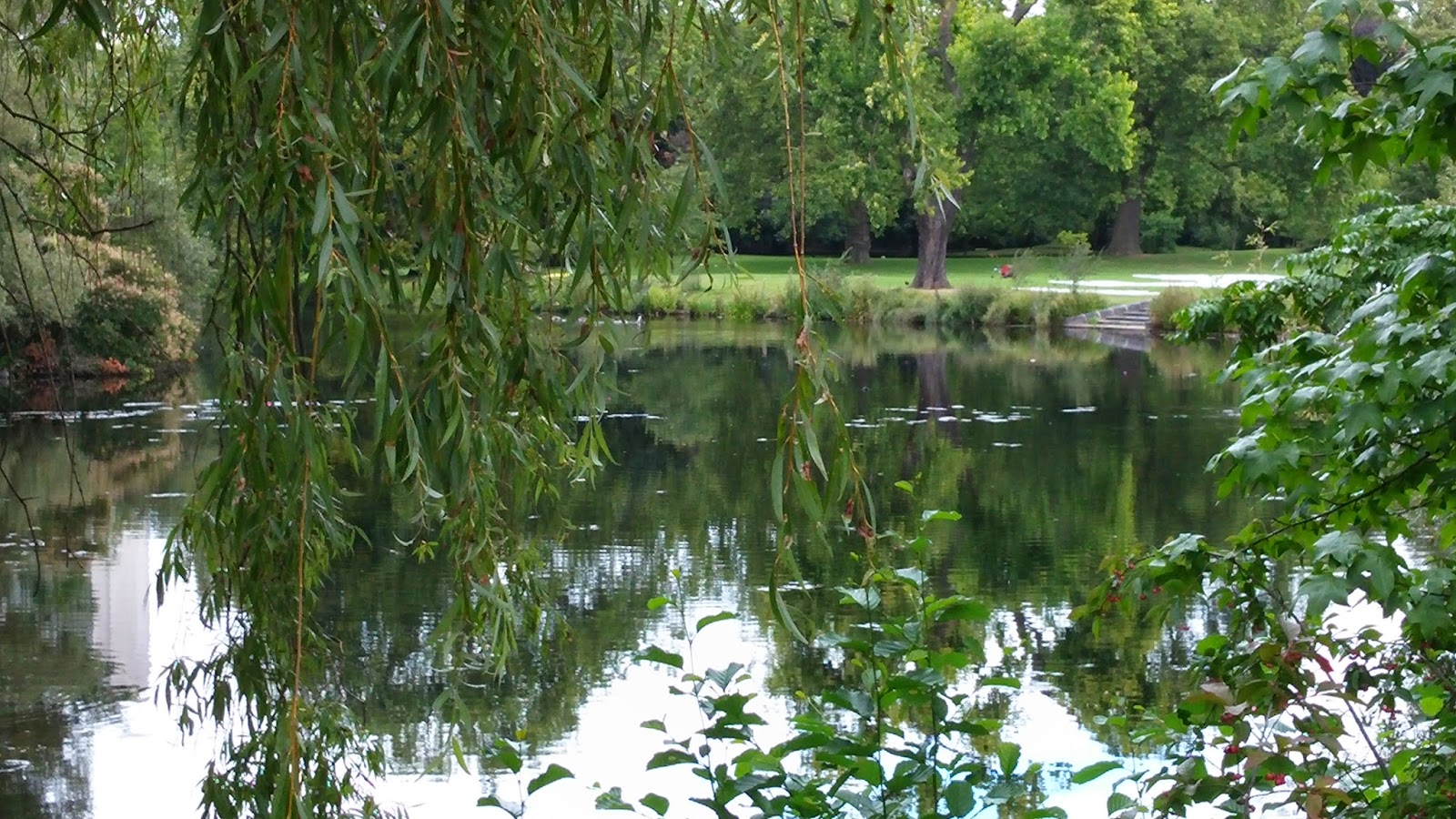 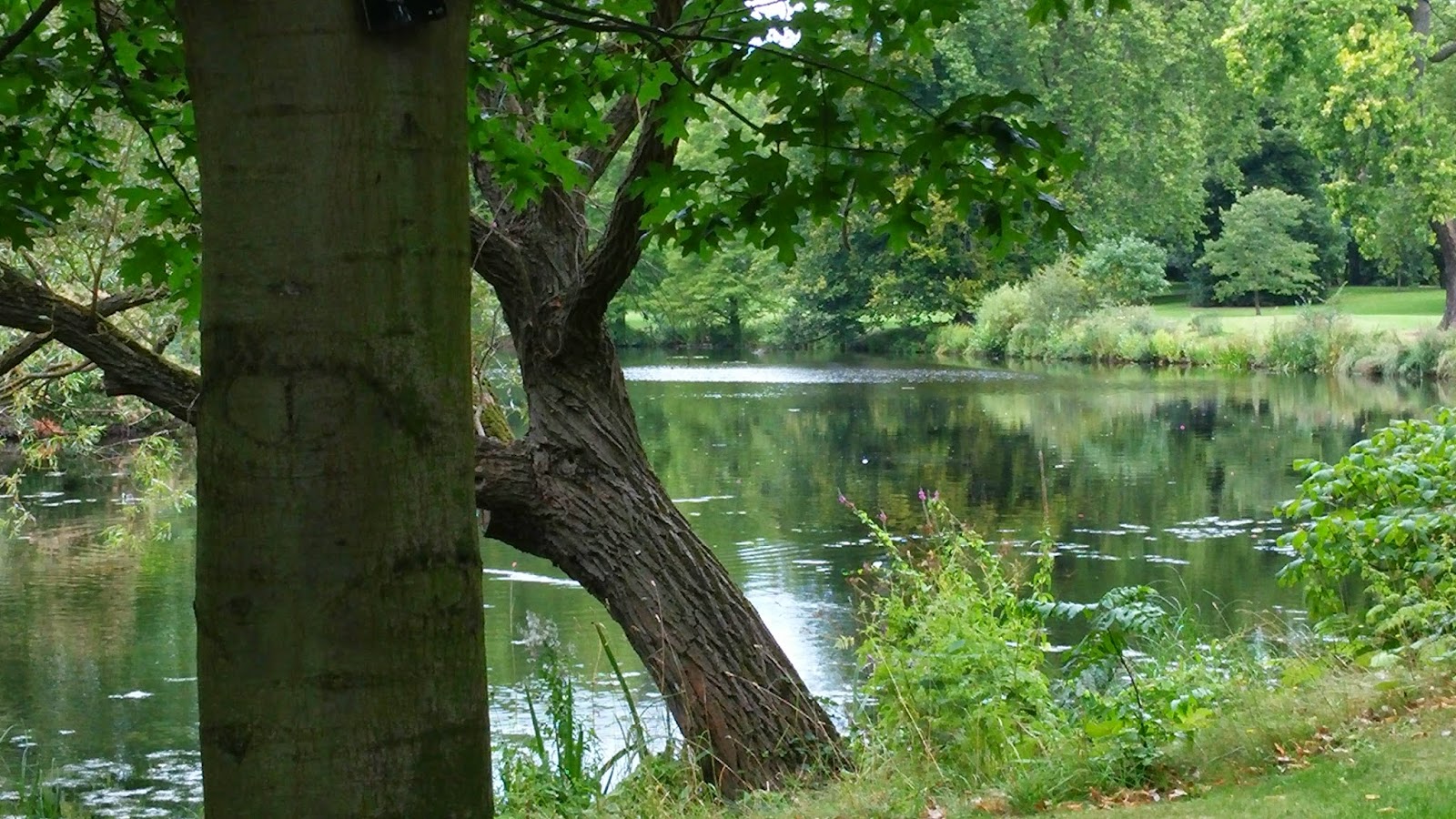 I made a quick little trip in to the gift shop and loaded myself up with waaaaay too many souvenirs.  But how can you say no to this little face? 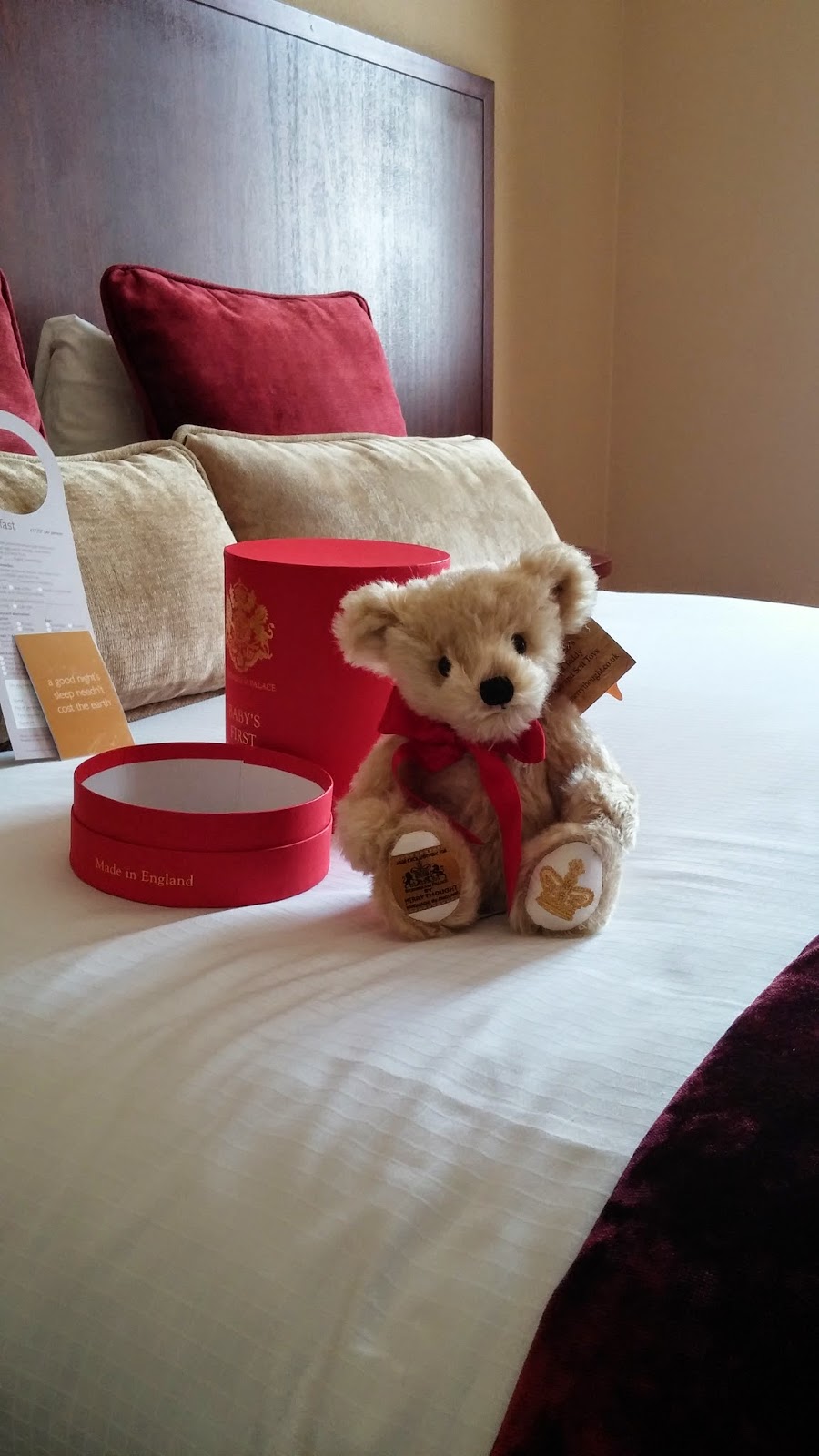 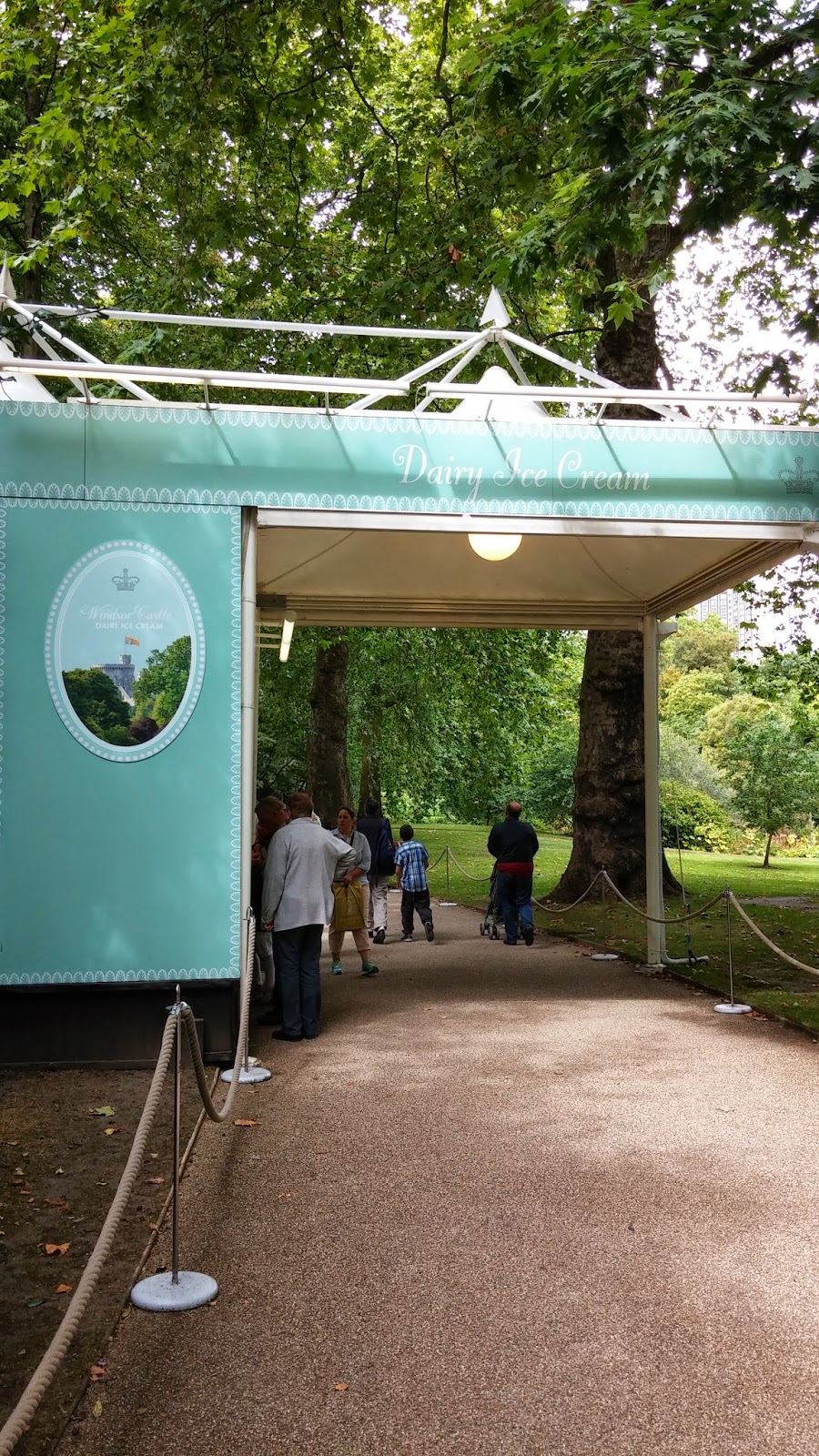 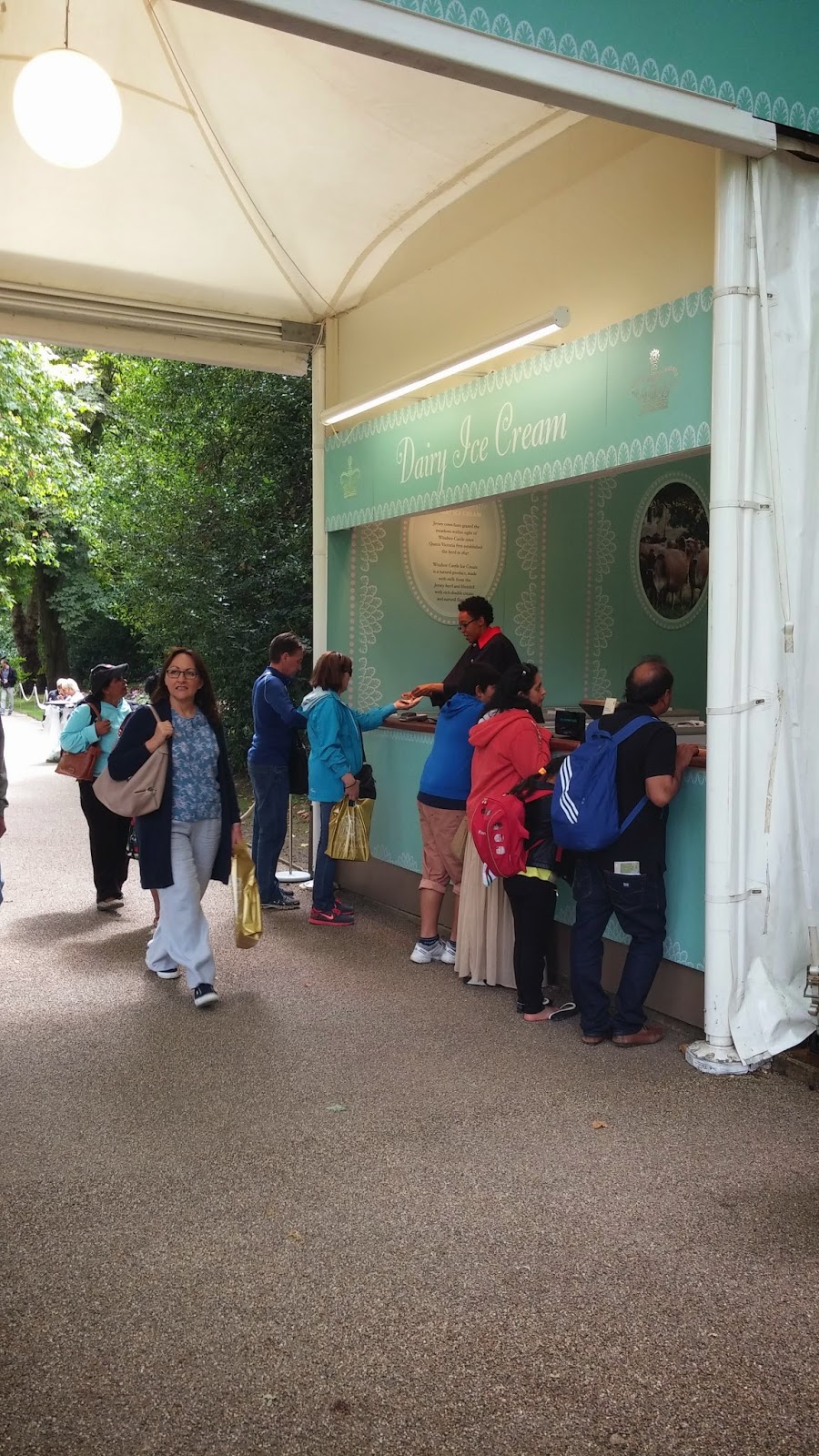 I grabbed a little ice cream, made from royal cows owned by the Queen. 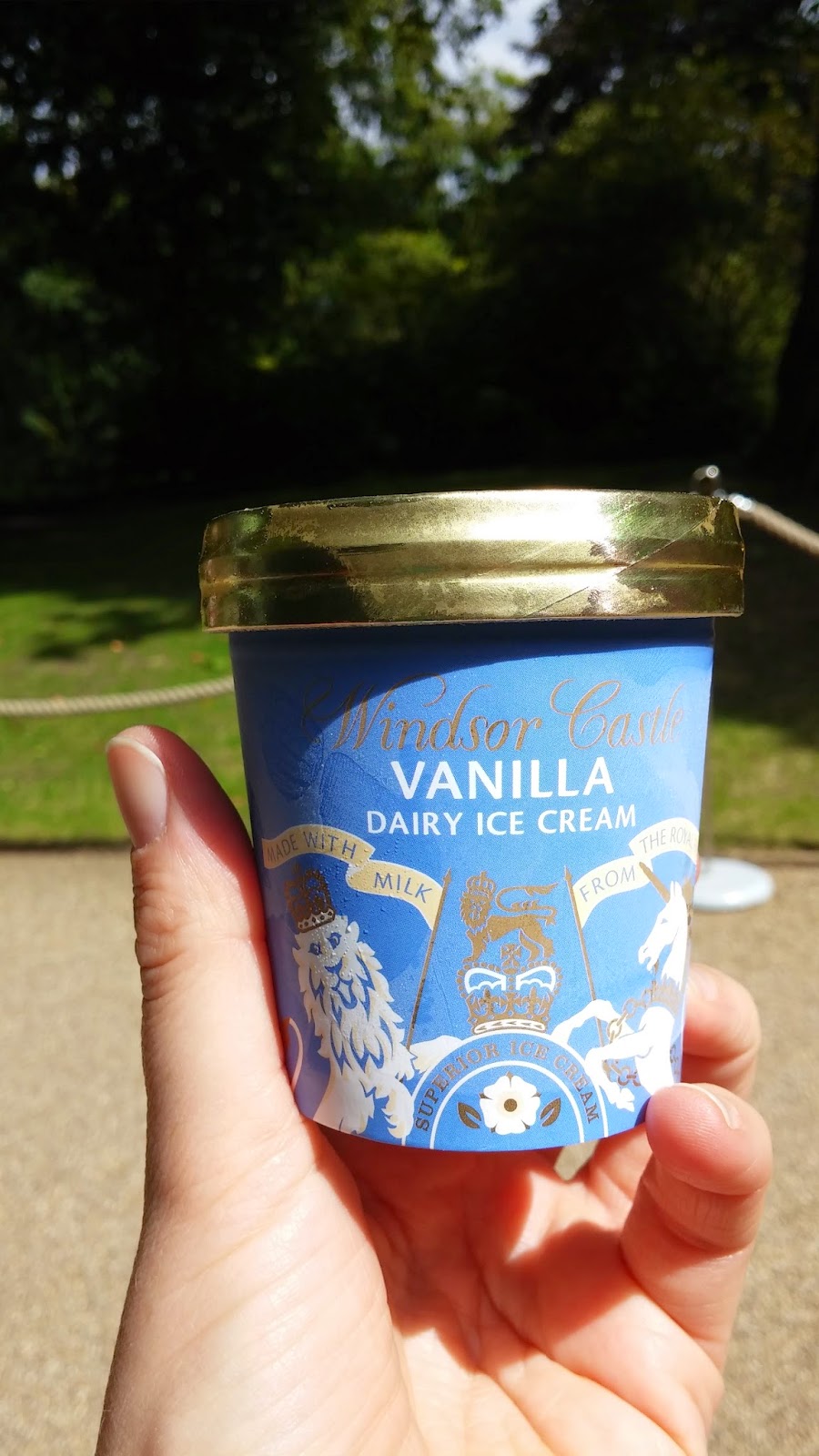 And I sat down on a bench to enjoy the view. 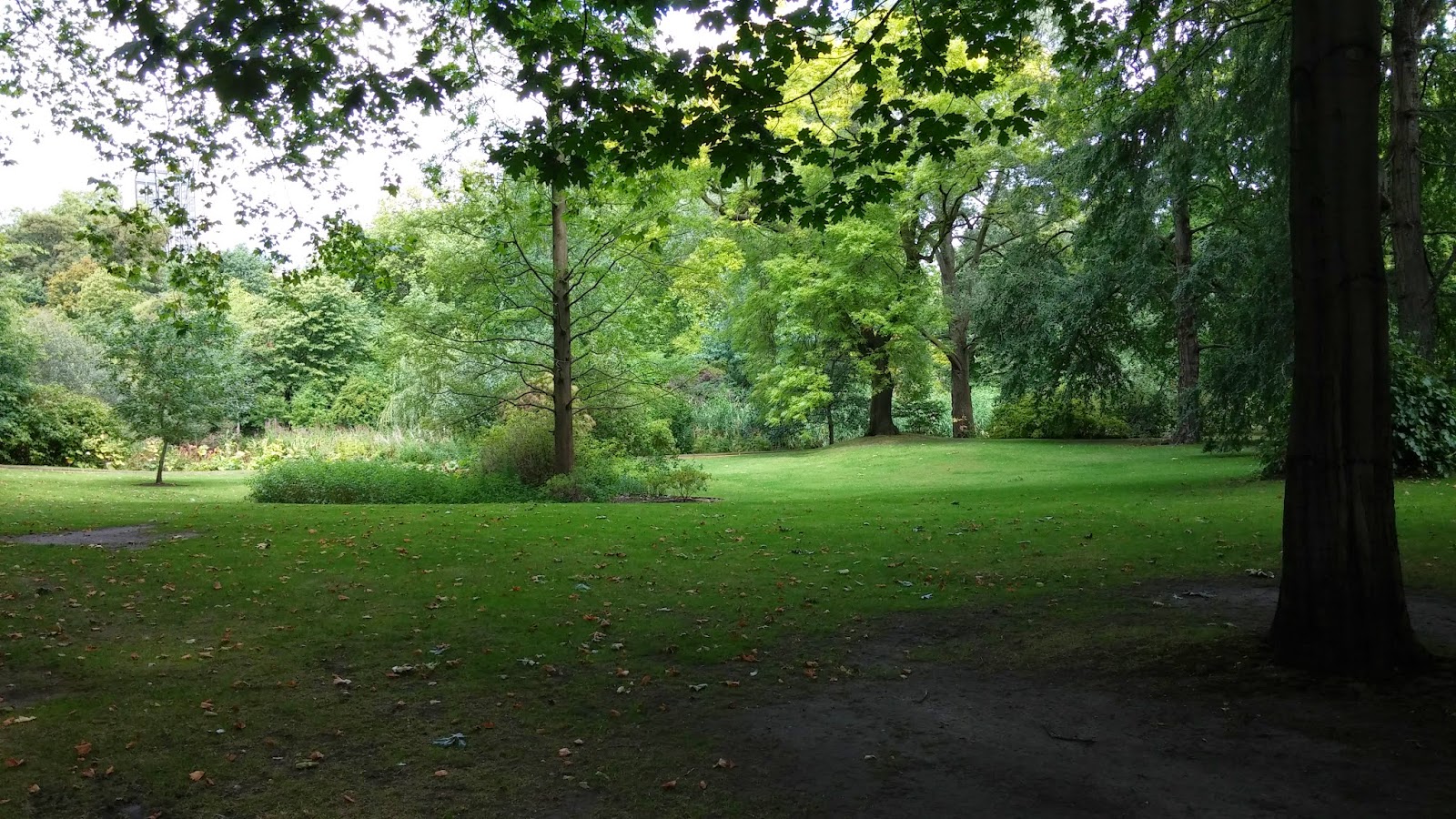 Now, I had a little time to kill before my show that night, so I wandered over to Hyde Park. 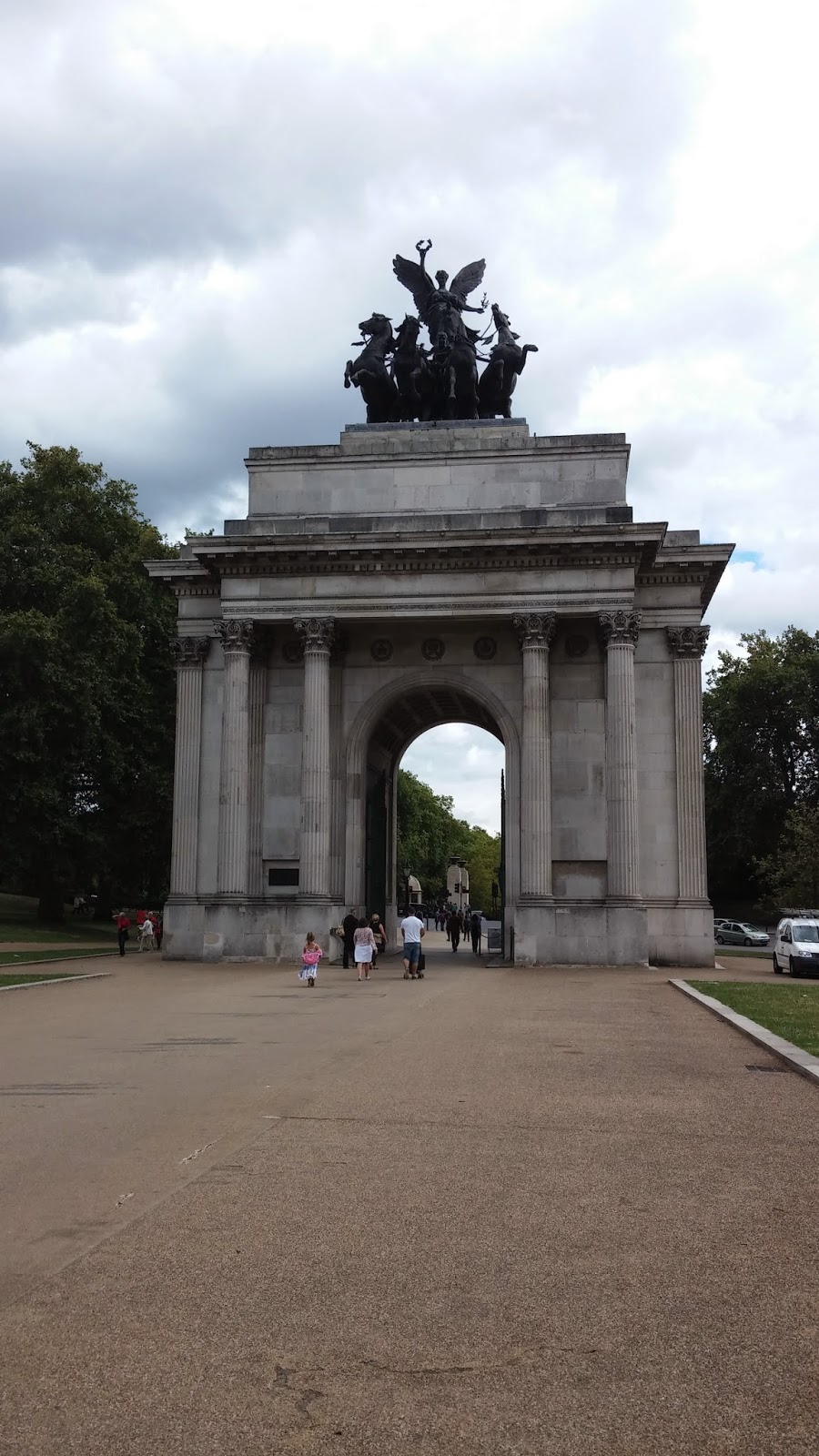 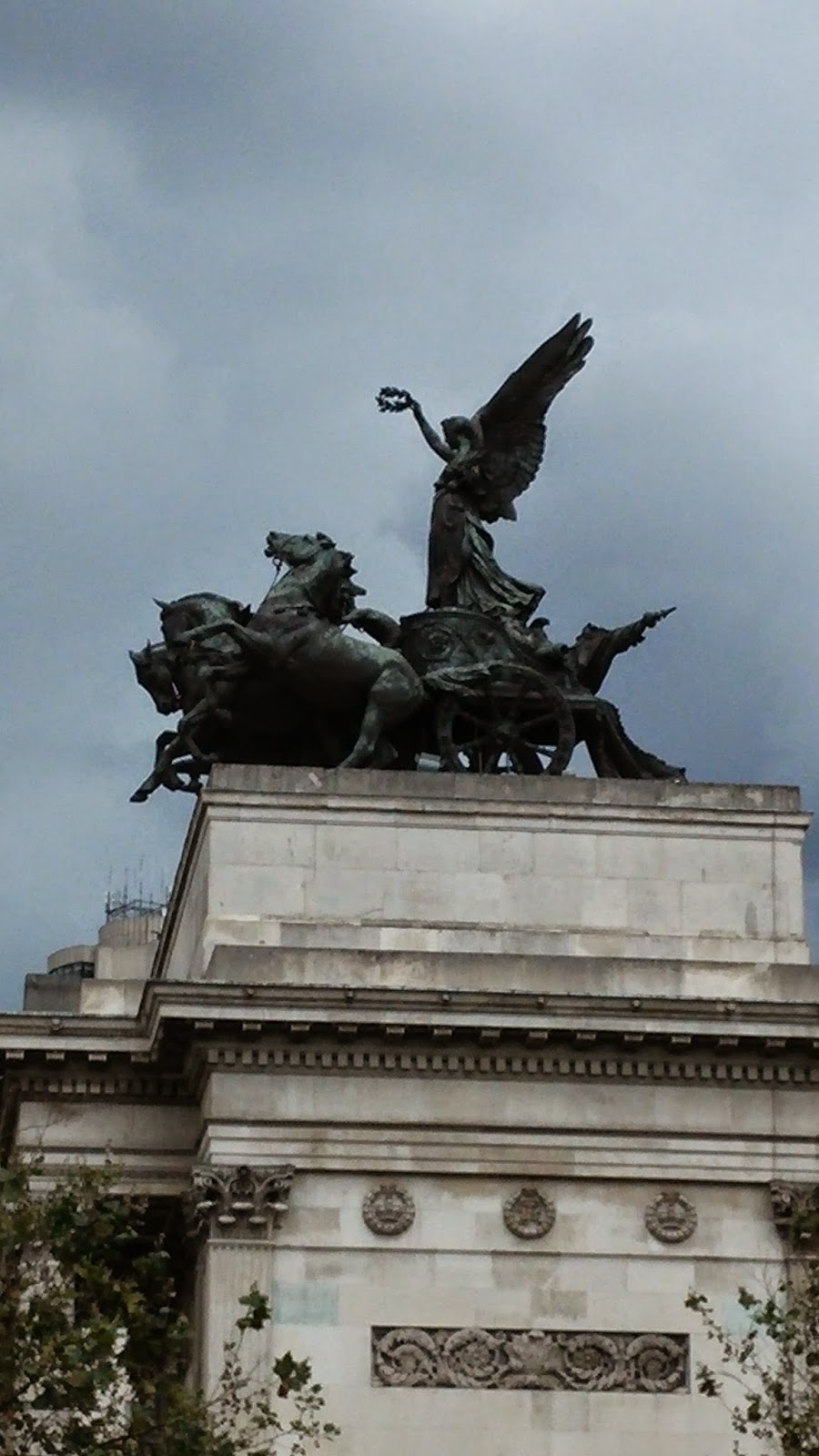 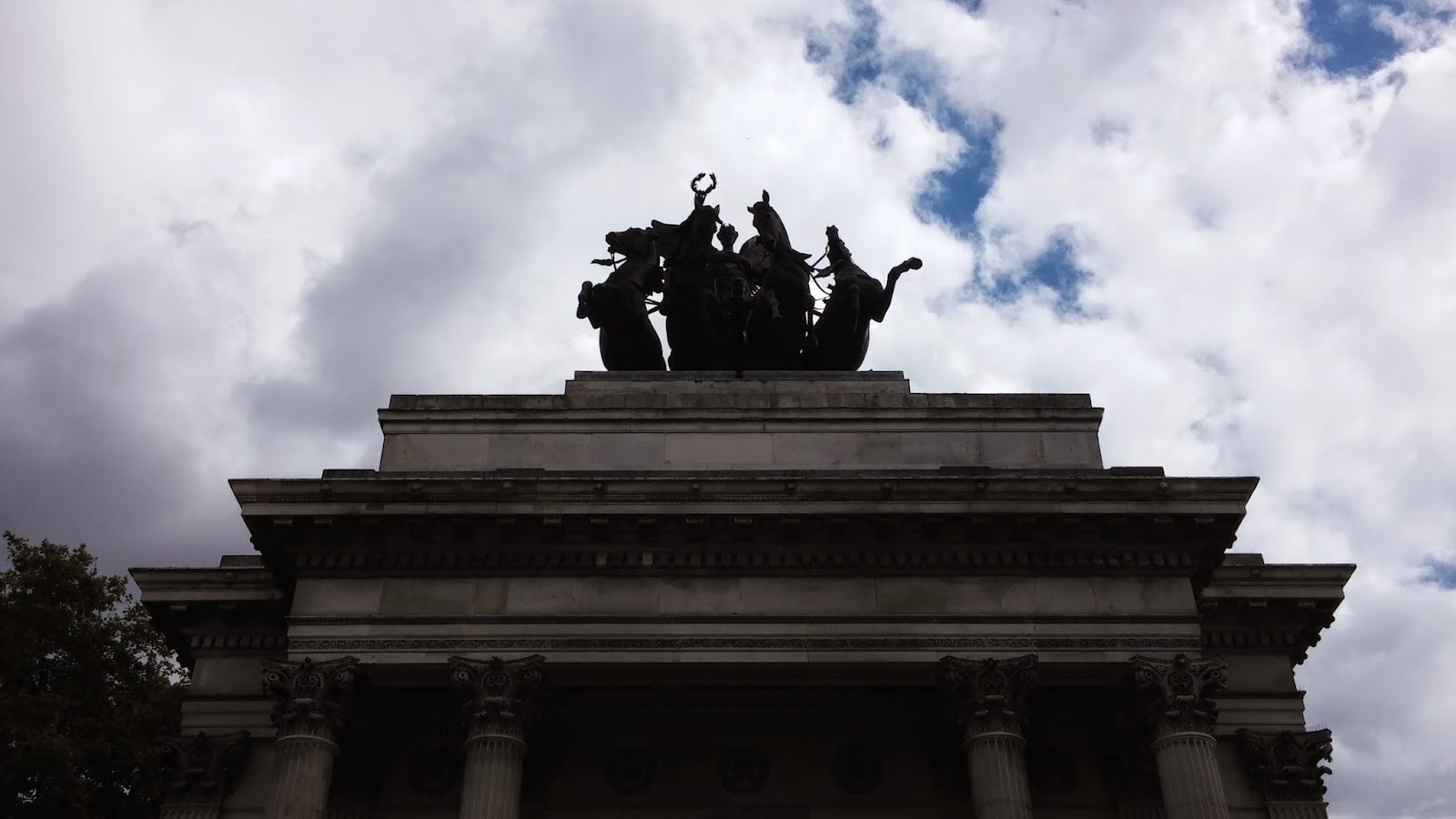 Stumbled across the Tardis (disguised as a transport info center)... 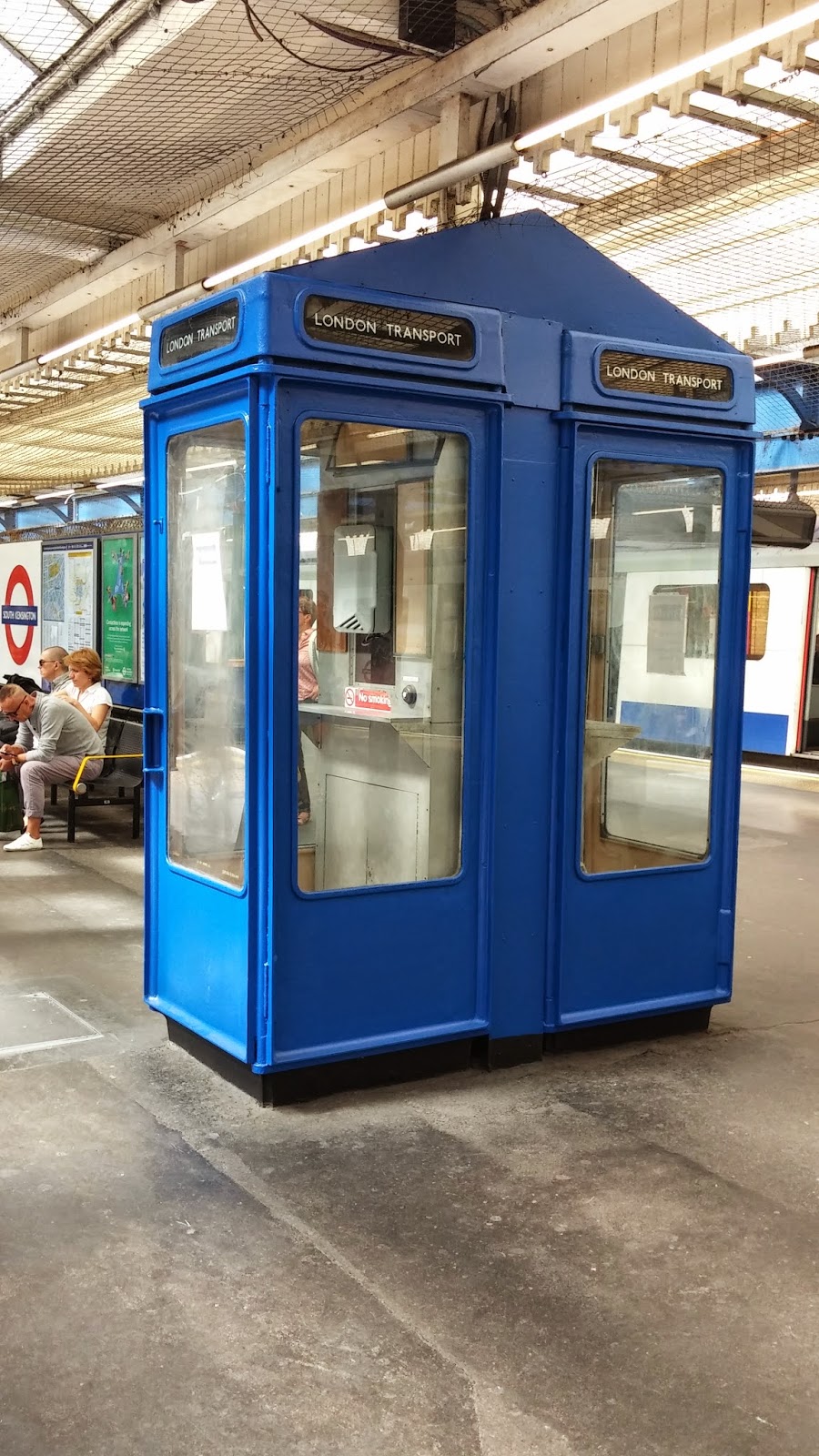 And then made my way over to Harrods.  I needed to pick up a mug for my mom, but it is one of my favorite places.  I strolled through the displays of Baccarat crystal and all of the shopkeepers  played along and pretended like I legitimately belonged there. 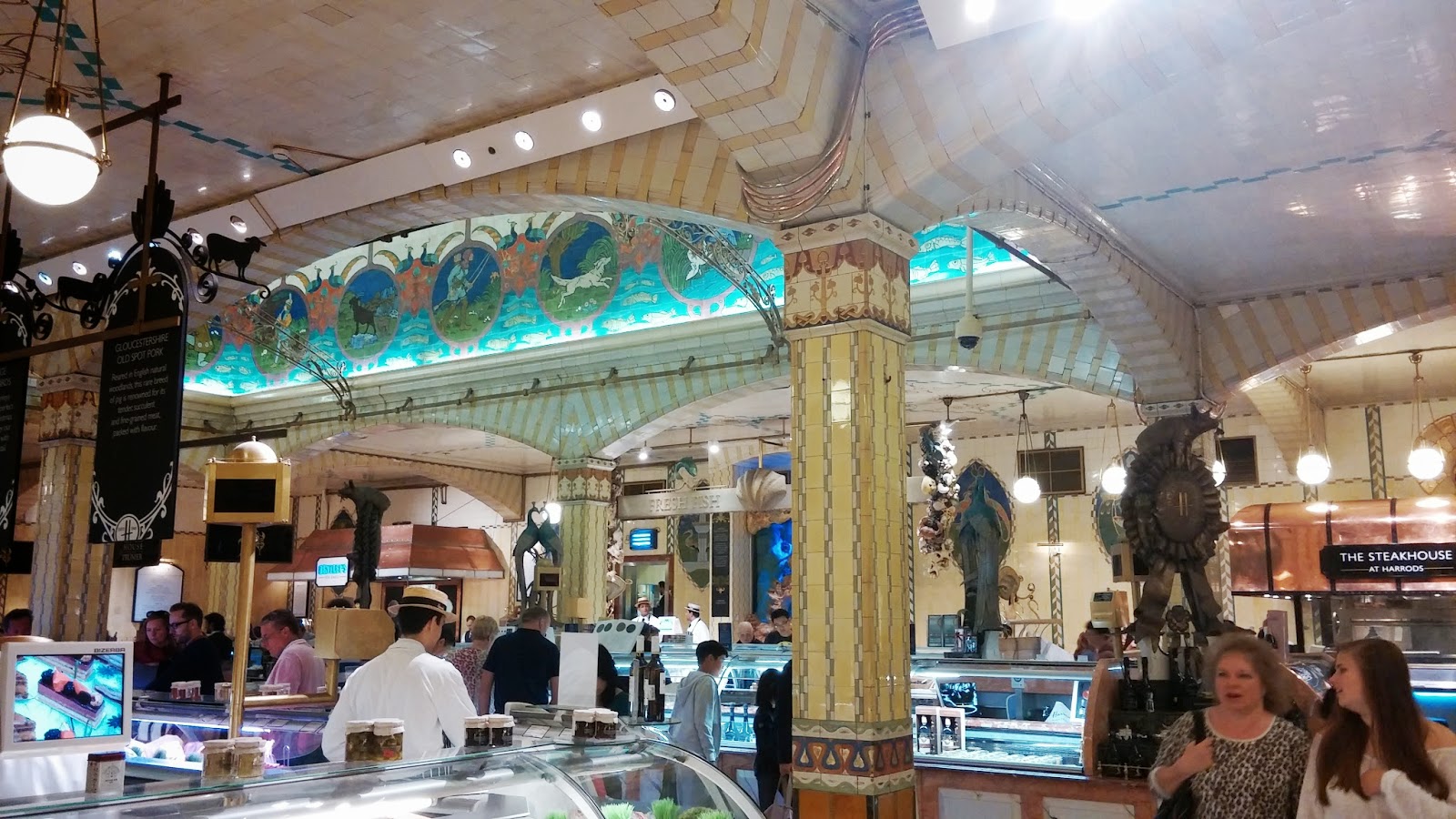 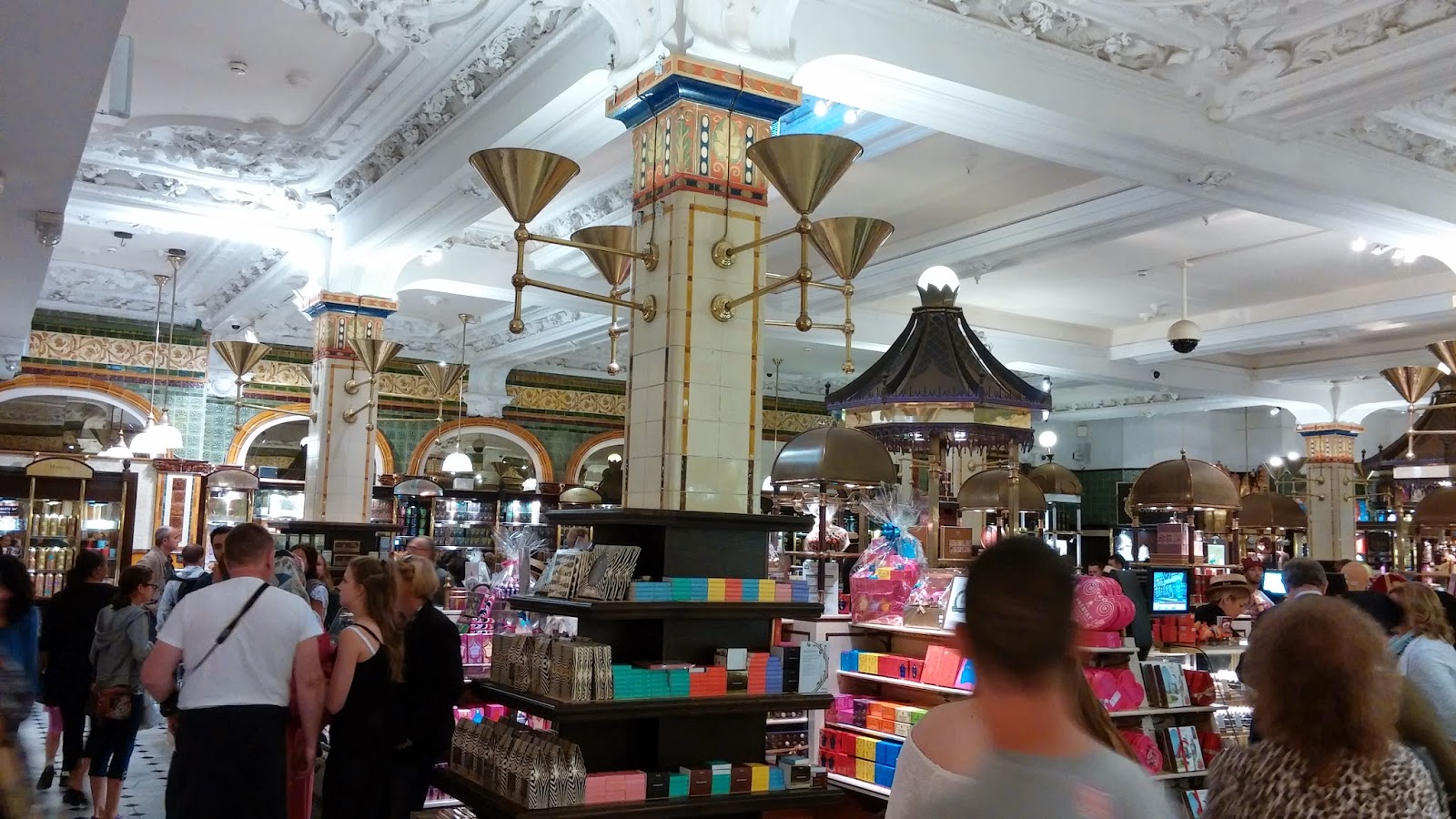 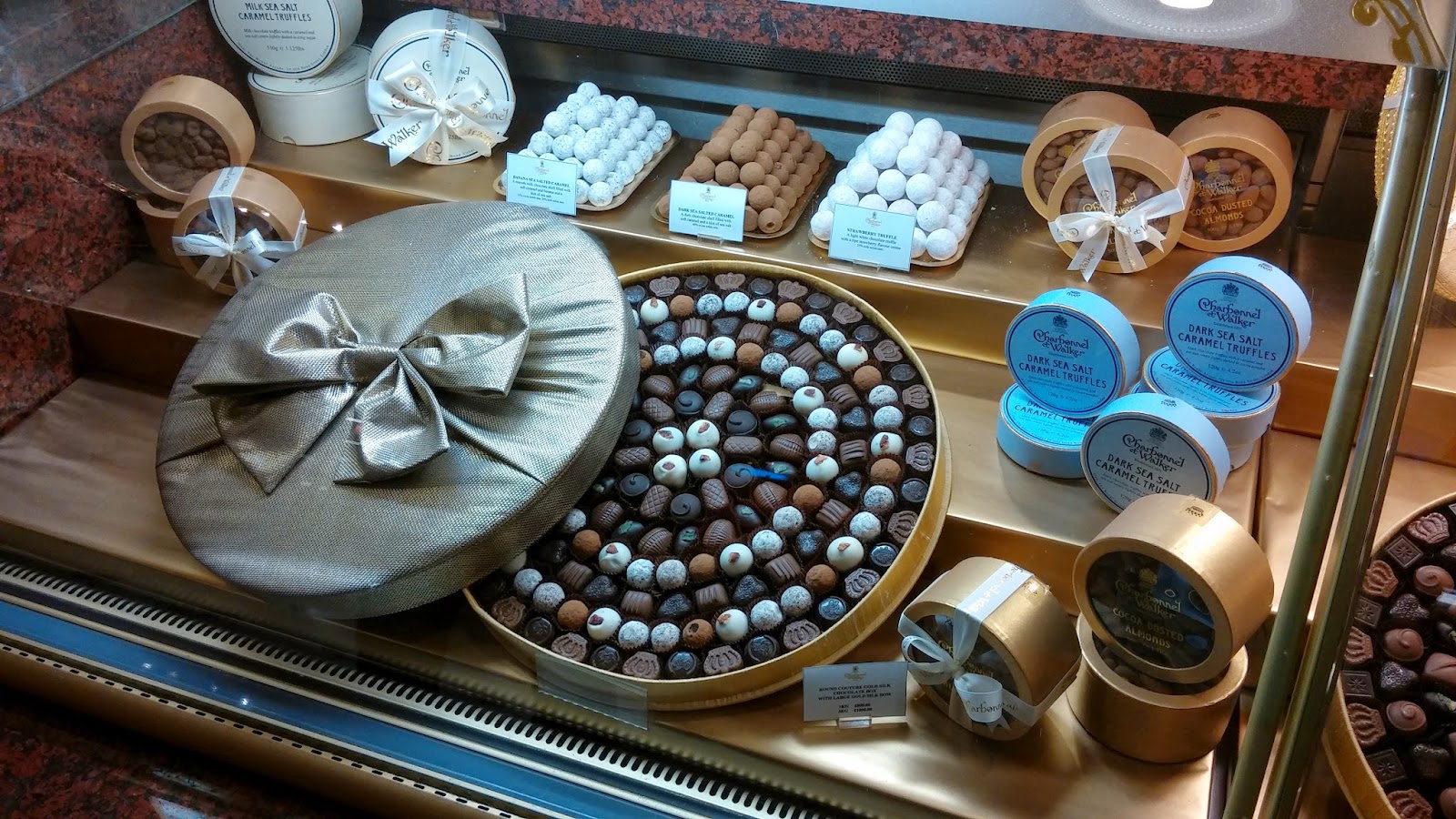 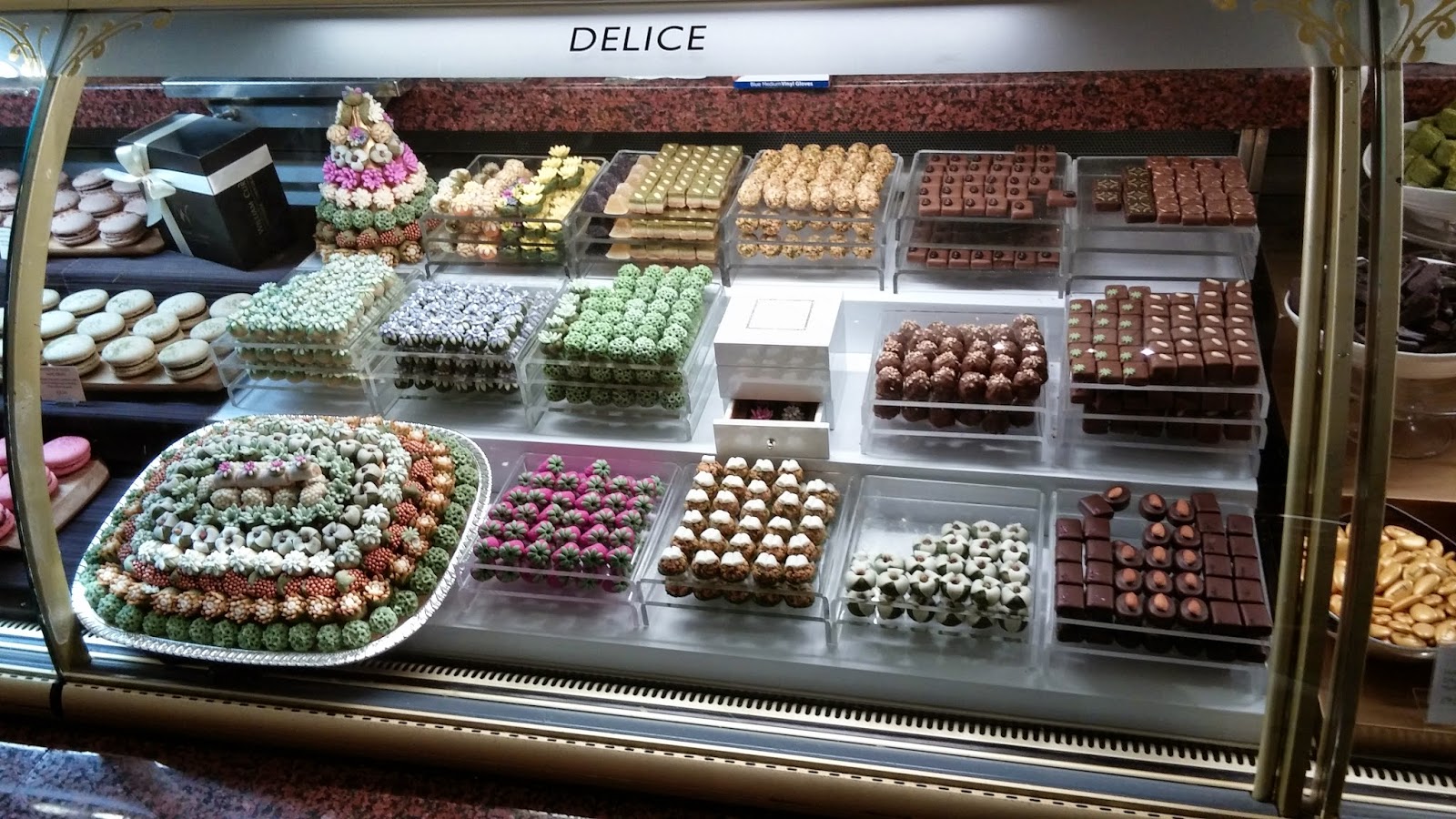 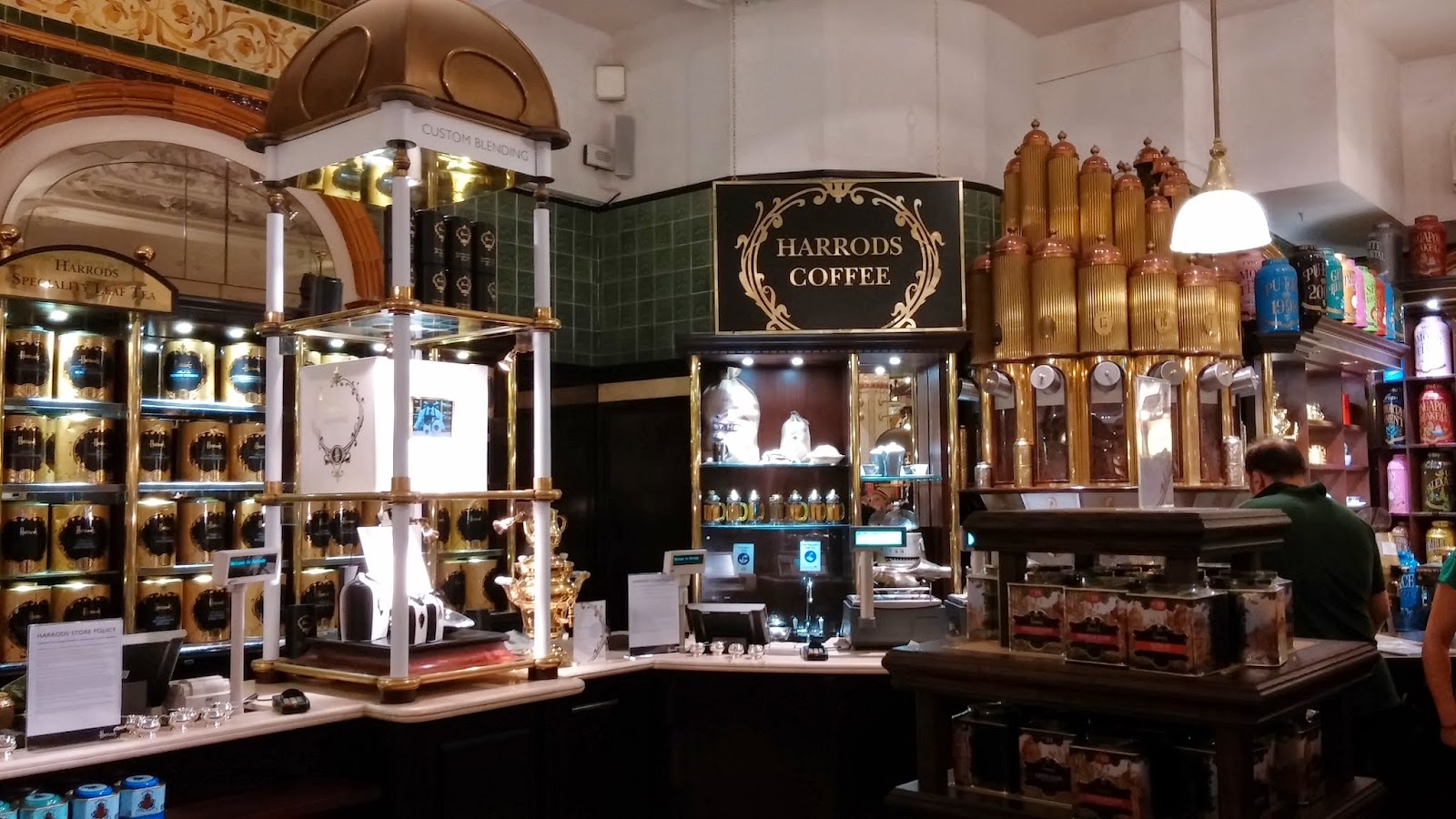 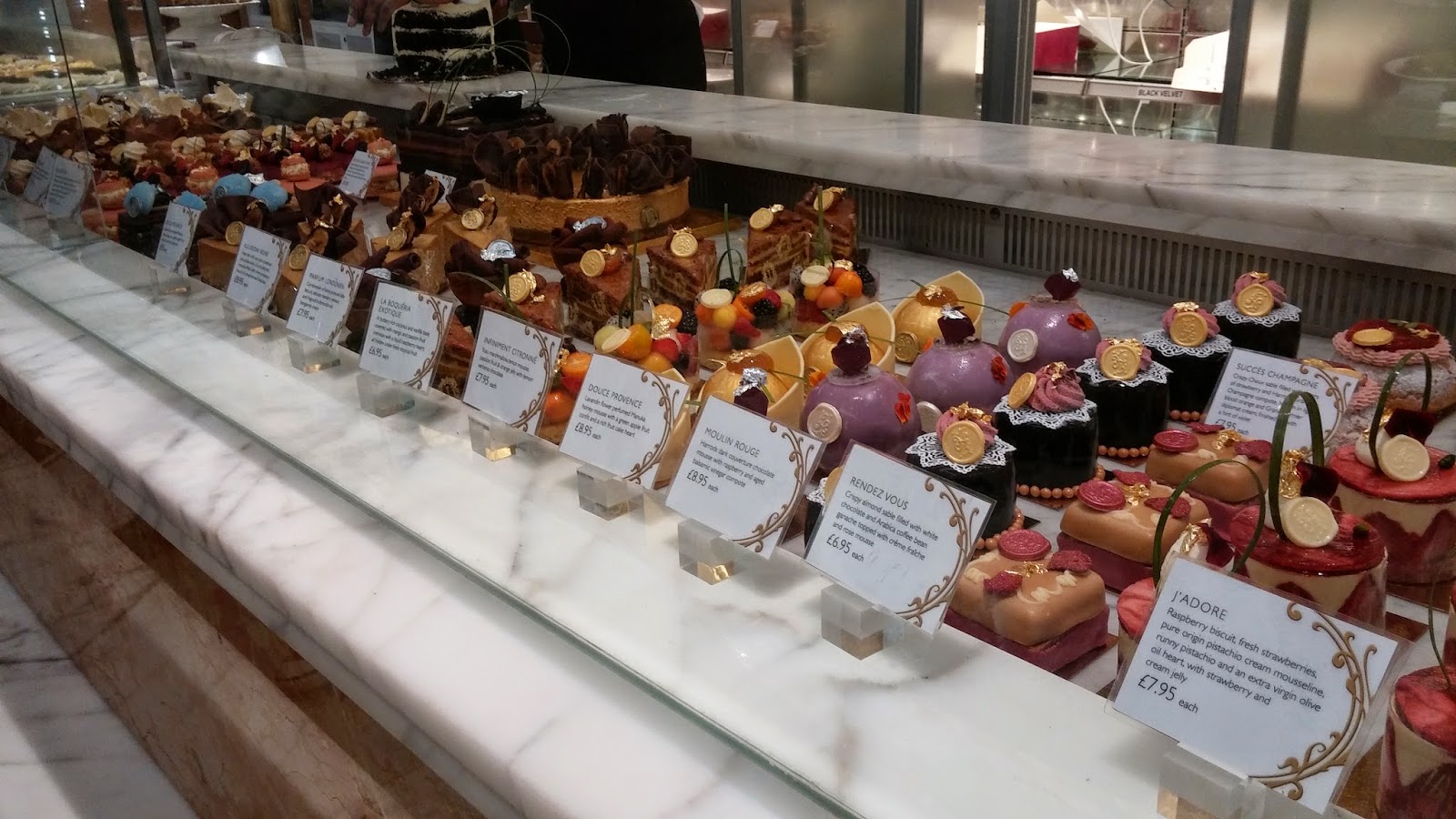 That night, I caught the musical Charlie and the Chocolate Factory starring Alex Jennings (complete with a flying glass elevator and the "World of Your Imagination" song.)  Stunning cast and when they hung Violet Beauregard (the blueberry girl) from the ceiling in blue sequins and spun her like a disco ball as the oomaploomas roller skated to a 70's inspired song, they had me.  Hook, line, and sinker. They rotate the cast and I don't have the program with me, but the girl  playing Veruca Salt was one of those kids that made you go, "Oh.  We're going to be seeing a lot of her in the future."  Just had that "it".

Gotta say, though, my whole day had that whole "it".
Posted by Kate Danley at 10:46 AM No comments: