As some of you may (or may not) know, I am writing a serialized installment of The Dead Man series with two fantastically talented authors, Phoef Sutton and Lisa Klink.


He was kind enough to drop by for an interview and I had a great time finding out what makes him tick.


Why did you write 15 Minutes to Live?


It’s my first novel. I’d always wanted to write one. I’d been searching for subject matter when I read Oliver Sacks’ THE MAN WHO MISTOOK HIS WIFE FOR A HAT. In it, he talks about Korsakov’s Syndrome, a form of amnesia that makes impossible for a person to form new memories. After that, the ideas just flowed.

What is it about this project that makes you happy or proud?

I finished it! It’s a huge thing to finish a book, regardless of whether it’s good or not!

What was one of the first books to inspire your interest in this genre?

When I was a kid, I used to read the ALFRED HITCHCOCK mystery anthologies, and that lead me to the works of Cornell Woolrich. RENDEVOUZ IN BLACK, THE BRIDE WORE BLACK and his marvelous short stories full of romance and dread and doom. I was lucky enough to adapt one of his novels, I MARRIED A DEAD MAN, to the screen as MRS. WINTERBOURNE. I guess his works have always stayed with me.

Who influenced your voice as a writer?

I feel silly mentioning names like James M. Cain and Raymond Chandler in the same breath as mine, but they were writers who made me want to write. Also, as I said, Woolrich and such diverse names as C.S. Forester and Richard Matheson. I was a voracious reader and I lived my childhood in books. They gave me companionship in a friendless existence!

I started writing like everybody else, alone in a room. I learned to write when I got my first job in television, writing for CHEERS, under the tutelage of great names in the field of comedy writing; Les and Glen Charles, David Lloyd, Ken Levine and David Isaacs, Bill and Cheri Steinkellner. They taught me how to outline, how to write and, more importantly, how to re-write! Writing a half-hour comedy might seem to be a whole ‘nother animal from writing a novel, and it is in many ways, but the basic tools of writing remain the same.

What is your process when you begin a new project?

I guess the first step on the road to any piece of writing is when you think about the notion all the time. In the shower. On your walks. When you should be thinking about something else. Basically when you can’t stop thinking about it. I’ve had many “good” ideas that evaporated from my mind. A lot of writers jot down ideas or fragments of ideas they might develop in the future. I do just the opposite. I try to forget them! If an idea doesn’t keep bobbing up in my mind for at least a few months, I’m not meant to write it.

What are some writing tips or tricks that work for you?

I find that the hardest part of writing is starting. Facing that empty blank page (or screen) and knowing that it’s first thing anyone will read or see is rather daunting. One trick I use is to start writing somewhere in the middle. Just to break the ice. I pick a scene I think I know well and just start at it. Once I’m in the flow of things, I go back to the beginning and find that it’s much easier to tackle. When I get to the scene I’ve already written – well, it’s a nice surprise to find it done. Though I usually have to re-write it from scratch!

What is one of the happiest moments in your writing career?

I could say when I won two Emmys for CHEERS. But to be honest, it was first moment I was on a sound stage with a script of mine in production. The glorious feeling of having people laugh at words you wrote is never to be forgotten.

What advice do you have for people who want to become writers?

Write. Write, write. Write. Write horrendously bad stuff until it gets better. That’s the only way to do it.

What upcoming projects are you working on?

I have two new novels that should be out this year or earlier next. One is a hard-boiled mystery novel called CRUSH. The other one is a ghost story called FROM AWAY.

Now... Just for fun...  You're in heaven (so anything is possible) and you own your own television network. What shows are on your channel?

What is your favorite pen to write with?

I used to love writing longhand, with a fountain pen. I have quite a collection of ink stained pens. But about six years ago I suffered a massive brain aneurysm that all but killed me. Since then, my handwriting (never very good) has been rendered so illegible that I can’t even read it. It’s too bad, because I miss the physical contact of writing by hand. But now I seem to be chained to the computer.

THE HORNBLOWER SAGA by C.S. Forester. I AM LEGEND by Richard Matheson. THE TALENTED MR. RIPLEY by Patricia Highsmith. THE DORTMUNDER NOVELS by Donald E. Westlake. And ANNA KARENINA by Tolstoy. For starters.

Tell us about your favorite teacher and how he or she influenced you.

Dr. Roger Hall at James Madison University taught a course in playwriting that was the only actual course in writing I ever took. One assignment he gave us was writing a play without dialog. I learned so much from that. That a story is about what people do, not what they say

What is your favorite quote about writing?

“Writing a novel is like driving a car at night. You can see only as far as your headlights, but you can make the whole trip that way.” — E.L. Doctorow”

Thank you so much, Phoef for coming over to talk with us!  Make sure to check out his book, Fifteen Minutes to Live, available FREE this weekend on Amazon Kindle!  Like his page on Facebook and follow him on Twitter!
Posted by Kate Danley at 12:49 PM No comments:

As mentioned in an earlier post, I got my inspiration for the characters of A Spirited Manor from oil paintings (okay, and a couple photographs... and a mug shot...) through the ages, and I thought that I would share them with you.  Below is the inspiration for Clara O'Hare, our young widow and star of the story. 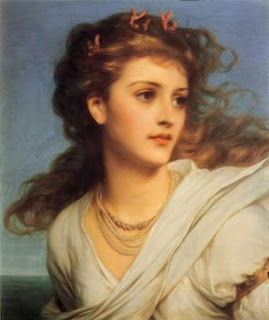 This painting is entitled Miranda and was created by Sir Frank Dicksee in 1878.

My mind is actually kind of blown as I type this, because as I was doing some research to find links for this post, I just discovered this is Miranda from Shakespeare's The Tempest.  One of my other projects is based upon another Shakespeare play, and one of Sir Frank Dicksee's other paintings has been hanging over my desk for months.  Dicksee?  I have a feeling you and I would love ALL the same movies.
Posted by Kate Danley at 6:18 PM 2 comments:

Ladies and Gentlesquirms!  Without further ado, may I present my latest title... drumroll please... A SPIRITED MANOR! 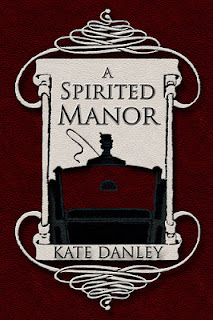 "In Kate Danley's deliciously twisted story, A Spirited Manor, grieving widow Clara O'Hare accepts an invitation to a séance in the remote country home of Lord Horace Oroberg. Joining her around the table are Oroberg’s cad of a son, Clifford; his mousy fiancée, Violet; her overbearing mother, Hilda Nero; Norman Scettico, a renowned scientist; the lovely Marguerite Matson; and the dashing young medium, Wesley Lowenherz.

Before long, the group’s fascination with the spirit world calls up something sinister, and Clara and Wesley are pulled together to solve a murder most foul. Laced with gothic tension, romance, and mystery, A Spirited Manor will delight readers with its unexpected turns and thrilling conclusion."

(Yes, this is the one that was formerly titled House on the Square and had the other cover.  That's going to be book two in this new series - The O'Hare House Mysteries)
Posted by Kate Danley at 8:42 AM No comments:

The Woodcutter on sale!

Most likely if you're reading this blog, you've already read it, but in case you need to buy one for a... *cough*... friend, The Woodcutter is specially priced for the month of June!  1/2 off the paperback and the Kindle edition is only $1.99!

Speaking of gifting, giving a Kindle book is super easy.  Just choose the "Give As A Gift" button on the page, and you can direct who gets it and the specific delivery day.  The recipient gets an email, clicks a button, and the book is delivered to their Kindle like magic.  Voila!  Father's Day just got a bit easier, huh?
Posted by Kate Danley at 9:30 AM No comments:

One of my favorite things to do when I write is to cast my books. I create a board (which hangs over my desk) with images to remind me what my characters look like. Usually, I cast actors I know, which helps me to capture vocal patterns and rhythms. 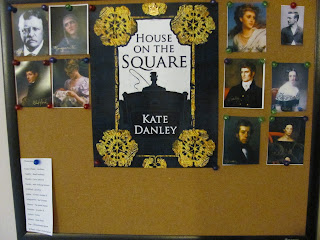 The cast of House on the Square, though, has come mainly from 19th century oil paintings (although Teddy Roosevelt, a stock photo, and some dashing criminal's mug shot have all made the grade, too).
Posted by Kate Danley at 5:16 PM No comments: